Readers may remember my reporting that a 150 year old horse chestnut tree in Amsterdam, which gave hope to young Anne Frank during the time that she and her family were in hiding from the Nazi's, was deemed to be unsafe and had been marked down for the chop until a last-minute stay of execution was granted while tree experts sought ways to save it.

Well, the experts have cogitated and come up with a plan. Reuters reported:

In a statement on Wednesday, city authorities, residents, the Anne Frank museum and conservationists said they had agreed to build a frame around the 150-year-old tree before the end of May.

"That means the tree can stay standing for a minimum of five to 15 years," they said. "A multi-year plan will be drawn up to keep an eye on its condition and safety."

Responsibility for looking after the tree has been assumed by the Support Anne Frank Tree Foundation, but the costs will be considerable: €50,000 for the frame required to support the 27-tonne tree and approximately €10,000 a year in maintenance, but as Arnold Heertje, a member of the foundation, said, "This is not just any tree. The Anne Frank tree is bound up with the persecution of the Jews..."

The news about the fate of this one old tree in a Dutch garden was reported across the globe yesterday by hundreds of newspapers, TV and radio stations from the San Francisco Chronicle via the Australian Broadcasting Corporation to the Times of India.

It is, perhaps, a cynical observation, but would that the many thousands of individual infringements and abuses of human freedom that are perpetrated daily - hourly - throughout the world might generate as much universal concern as something which symbolizes freedom...

It also proves that one should be very wary about stuff you buy on eBay!

"Our chestnut tree is in full blossom. It is covered with leaves and is even more beautiful than last year..." 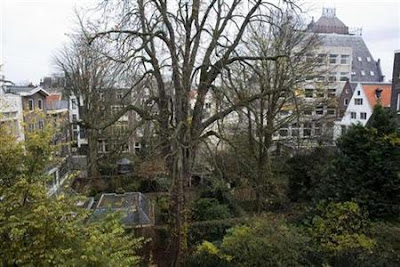 Hi, please to meet you again on the blogsphere.

I don`t think that your coment is cynical.

In the wider scheme of things, it probably is a waste of money but then if that money was diverted elsewhere, to more deserving cases, whilst the other waste in the world continued then that wouldn't be right either.I'm all for helping deserving causes but I'd take the money from each governments armaments budget first.

Picking up on what Eudora says. The sad fact is that there is easily enough money in the developed world to put all manner of things to right, and yes, of course many of them are much more important than a tree regardless of what it symbolises.

However, where there is no will to spend this money it will not be spent at all, and not spending it on the tree does not mean that it will be applied to more worthy causes

The tree of Anna Frank, yes, I understand, I suppose that in Europe was another millions of trees, one for each jew murderred in the camps.... sorry for this sad thougth.

"It is, perhaps, a cynical observation, but would that the many thousands of individual infringements and abuses of human freedom that are perpetrated daily - hourly - throughout the world might generate as much universal concern as something which symbolizes freedom..."

Totally agree. People get sentimental about the oddest things while the world is full of suffering and misery.

Cut the tree down, plant a new one, what's the problem with that? A fitting monument I'd have thought.