Only readers of a certain age need (or will be able to) answer the following question...

Do you remember the Eagle comic?

There was the thrill of following the exploits of 'Dan Dare, Pilot of the Future' (and his arch-nemesis, the Mekon); 'Storm Nelson, Sea Adventurer' and 'Jeff Arnold in Riders of the Range'. Then there were more homespun dramas with 'PC 49' ; fascinating facts courtesy of 'Professor Brittain Explains' and laughs with the pompous 'Harris Tweed: Extra Special Agent', created by John (Captain Pugwash) Ryan... 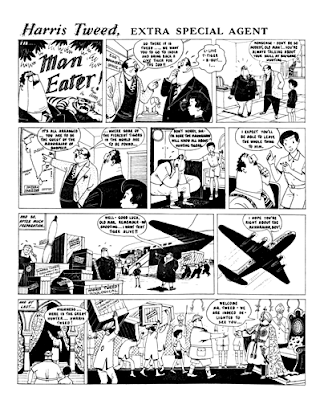 Eagle which first took wing in 1950, and kept flying until 1969 (an updated version was launched in 1982), was an innovative comic designed to provide an antidote to what its founder - the Reverend Marcus Morris - saw as the bad influence exerted over Britain's youth by the American comics of the post-war period. Marcus and his colleagues sought to produce a high quality magazine full of instructional and inspirational stories and features that were unlike anything existing at the time. As a result it sold over 900,000 copies a week!

Eagle is now long gone and most British comics are struggling to survive. And yet, last week, along came The DFC, a brand new comic for 21st Century kids - and 20th Century kids who haven't yet grown up! The first issue of The DFC dropped through my letter box on Saturday morning - a day late, but certainly worth the wait.

Like the Eagle, The DFC has a varied line-up of material. Top story is John Blake: a mysterious adventure set (initially) in the high seas - written by Philip Pullman and dynamically illustrated by John Aggs - and clearly destined to become a tale of great perils and excitements... Maybe even a present-day Dan Dare. 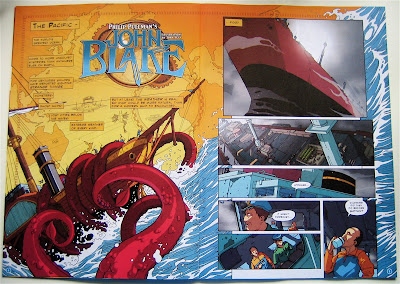 Click to enlarge
Then there’s The Boss: schoolboy (and girl) exploits that are described as being a cross between Grange Hill and CSI; Mo-bot High, a less conventional educational establishment where giant robots do battle behind the bike sheds; and an anime-inspired story, The Spider Moon... 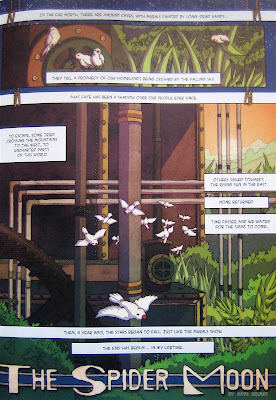 Click to enlarge
There's zany animal humour with Super Animal Adventure Squad; a pair of bungling canine detectives, Good Dog, Bad Dog; Vern and Lettuce, the adventures of an urban sheep and rabbit by Sarah McIntyre; and The Etherington Brothers' Monkeynuts, featuring Sid the dancing Monkey of Chump Town, Rivet the Robot and Eric (better known as Lord Terra) the dragon and Evil Mastermind -- well, every comic worth its salt must have at least one Evil Mastermind! 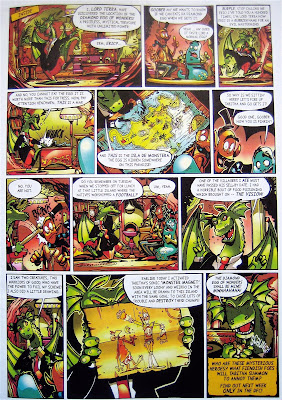 So, why 'DFC'? A sly reference, perhaps, to America's DC comics, home of Batman, Superman etc al? Nope! According to the first issue it stands for Dracula's Favourite Cardigan, but that's a joke.

In truth, the 'DF' in DFC stands for David Fickling, the award-winning publisher of, among others, John Boyne, Mark Haddon and the aforementioned Philip Pullman and who has now launched this enterprising new venture.

At present The DFC can only be ordered on-line - since cutting out the retailer enables them to keep the price down. At £3 an issue, it is, admittedly, a tad more expensive than the Eagle's 4d cover price --- although, allowing for over 50 years of inflation, maybe not!

I’ve always believed that comics and graphic novels can provide a stepping-stone to books. As child, I was a voracious reader consuming the Eagle, Mickey Mouse Weekly, The Children's Newspaper and Blyton and Buckeridge alongside Dickens and other classics. I hope The DFC will be part of many of today's children's reading - throwing wide the windows of their youthful imagination and possibly even encouraging them to prise open some of the locked doors of literature...

Apart from which, it happens to be great FUN!!!
Go to The DFC web-site to subscribe.

Here in Belgium there is a massive comic book culture (mostly hard back editions) with a terrific variety of comics from your typical hero adventure stuff, to comic stuff like Asterix to more mature second-degree comics. Nobody flinches at all at the sight of a grown man (or woman) reading a comic book on the bus or train. There are some amazing collections... and collectors. Remember Tintin? He still has a great cult following and is considered as something of a national hero. Who was the first man on the moon, for example?... Well, Tintin of course!

Re Suzanne's comments, Tintin is an international hero too ! The husband and wife team that translated Herge's adventures into English managed to keep alive or recreate the magic very well and I have been happily reading those adventures for forty years.The last ones written were only translated in the last 20.I always visit the Tintin shop in Brugge when I'm there.
Mr B, I agree with your comments re 'graphic novels'. The Americans are not afraid, as we know, to put anything into a cartoon strip and Dickens translates to that format just as well as Bradbury. Its a shame we don't follow their example because it would be a great way to introduce literature to kids from an early age.I would have appreciated it, if only as a change from my constant diet of 'Commando' cartoons..."Have this pineapple for your breakfast Jerry..." etc :-)

Hooray, I'm glad you like it! It's all very exciting!

Thanks Sarah and congratulations on your 'Verne and Lettuce' strip in The DFC (blog readers see above); also enjoyed visiting your wonderful web-site...