The thing about having a head for heights is that you either do or else... Oh, God, No! Please! I can't look down... I can't look DOWN!!

Some folk have a head for heights. I DON'T!
I used to be embarrassed about this fact, but not any more. Embarrassment about vertigo only leads to the most appalling tortures - such as being frozen with fear in the ball on the top of St Paul's Cathedral with several hundred tourists waiting for you to come down so they can go up.

My only excuse for such stupidity was that, at the time, I was courting a young lady and didn't want to appear un-macho. Had I not been a closet gay, I'd have probably gone there with a boyfriend and told him I'd hold his shoulder bag while he went up! 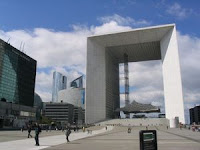 That said, I did - voluntarily - get into an external glass elevator at the Arche de la Défense in Paris (right) because I knew that David wanted to go up and see the view. I thought I could cope with the 110 meter ascent, but became almost hysterical - even with my eyes closed - and totally incapable of contemplating the subsequent descent.

After much haggling in schoolboy French (by David) a grumpy French security man conducted me through a series of security doors to the French President's personal lift that was was inside the building, but which dropped like a stone and was, therefore, almost as scary as the external elevator!

Anyway, apart from that little incident, I am now very wary and avoid anything with a height factor in excess of a standard kitchen chair.
Rollercoasters? If you don't mind, I'll just sit here and have another bag of popcorn while you scream your way through climbs, drops and corkscrews. True, I did once go on Space Mountain at Disneyland but that was at 1:30 in the morning and I only went because Carol Thatcher dragged me on to it -- but that's another story...

All that said, I do take a vicarious pleasure in looking at images and even films of vertiginous locations such as El Caminito del Rey (or El Camino del Rey, 'The King's Pathway') the via ferrata - or walkway - now much fallen into disrepair that is pinned - and none too securely - along the steep walls of a narrow gorge in El Chorro, near Álora in Málaga, Spain.

Having gone many years without any maintenance the pathway is in a highly deteriorated and dangerous state.

In 2006, the regional government of Andalusia budgeted for a restoration plan estimated at € 7 million - I guess now it's down to whether they can find a builder willing to take on the job! You can just hear them: the sucking in of air through the teeth, the shaking of the head: "Ah... Not sure about that, guv, tricky, I'd say... " 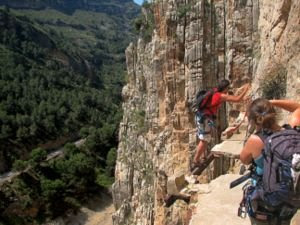 Most of the path has no handrail and some parts have completely collapsed so that all that remains is the steel beam originally in place to hold it up (above) and a wire that follows most the path and which one can latch onto in order to avoid falling, Nevertheless, many people have lost their lives on the walkway in recent years and after four people died in two accidents in 1999 and 2000, the local government closed the entrances. Undaunted, adventurous (i.e. mad) tourists still find their way into the walkway.

To save yourself the bother, you can now watch from the comparative safety of your own home...

YIKES! and triple yikes!
Although if I were completely guaranteed that the passageway was in a safe state of repair I might be tempted...
I used to be the same about corkscrew staircases (do I mean corkscrew?), but curiosity and a passion for historical buildings got the better of me; but they still have to be safe!

I'm scared of heights myself but have just come back from the Costa Del Sol where I TWICE had to come face to face with my fear - once going up the cable car to the top of the top of the rock in Gibraltar and once going up a 2,000foot mountain side, also in a cable car which, at times, was pretty steep ! Like you, I actually LIKE heights because of the views but it doesn't stop my feet going wobbly and I can't wait to go down... As part of my Psychotherapy training includes hypnotism, it will be interesting to see if I can get rid of this fear in the future.

These people are utterly insane. I was amused by the one wearing a bike helmet [apparently] that would help a lot!

I too hate heights, though I'm OK in lifts however high. I find it difficult to watch Batman Spiderman et al though because they make me feel sick and dizzy.

I have to close my eyes a lot on the coast road from Pothia to Emborios, how do you cope with this? The drops are pretty scary!

Thanks Brian - I've just had an anxiety attack watching that!
And to think that I used to go regularly to that region of Spain and missed out on the experience. The only way I'd be able to cover even a few yards, would be on all fours.
And yet, the views are so spectacular that I wish I had the courage to try.
I remember climbing a towers in York and in Scotland. I wanted to address the fear. I managed, but I was so tense that my leg muscles went into spasm when I got back down again.

SUZANNE - I couldn't do it even if it was guaranteed safe, because I'M NOT!!

As for those winding staircases (spiral, I think, but 'corkscrew' is good enough!): I'm not keen either. But do you know why they spiral up in an anti-clockwise direction?

It was so that any invading soldiers trying to mount the stairs and encountering defending forces coming down would find it difficult to fight with their right sword-arm because of the tightness of the spiral; whereas the defenders would have the benefit of a freer space in which to wield their weapons.

BOLL - I have HUGE admiration for any man who can go in a cable car, not once, but TWICE! The only cable car I've ever been in was the one that used to gently sway its way from Fantasyland to Tomorrowland in Disneyland, and I did that before someone fell out and the Mouse's Health & Safety Department closed it down.

GILL - Yes, that coast road on Kalymnos is spectacularly scary (especially - and you'll know what I mean - with some drivers) but the view out across the vast, diamond-scattered, blue-marble floor of the sea towards misty-grey island shapes is so breathtaking that one simply has to look out rather than down.

LISAH - Like you and Boll, I really appreciate the views from the top of tall places (as long as I don't have to stand too close to the edge and there is a wide enough barrier between me and the drop, as on the Arc de Triomphe in Paris), but it is always marred by the anticipation of the descent to come...

Forgive me, but I really do have to comment on your assertion: "The only way I'd be able to cover even a few yards, would be on all fours..."

ON ALL FOURS?? Are you TOTALLY INSANE?!

Maybe I should have said 'on my hands and knees - lowest centre of gravity. Actually, I have a recurring dream whereby the only way I can go down ordinary stairs is by sitting on them and easing myself down.
Has anyone else had a bad experience which has perhaps triggered the fear?
When I was in the Lake District when I was in my teens, I slipped whilst somewhere high up and if I hadn't been able to cling on to a tree it could have been very nasty.

LISAH - Your dream might come in handy in terms of advance training if - as I hope you won't - you ever break a leg. ;-)

I once got stuck at the top of a very steep hillside in North Cornwall on finding myself trapped between a barbed wire fence on one side and a sheer 400 ft drop to the sea on the other.

I eventually managed the descent by sitting on my bum and edging my way down with my eyes closed and my feet planted against the back of a long suffering friend who patiently inched his way down in front of me.

I'm not very good going down either. I have been known to descend rocky (mini) heights on my rear end, thus getting very dusty and very teased by other members of the group! But at least I did it!
And yes I did know about the reason for spiral stairs going that way round (hey, I'm not passionate about history for nothing you know!)

I am dreadful with heights - but I was delighted to persevere enough to ascend the London Eye and I'm thrilled that I was able on the last couple of occasions to convince other vertigo sufferers to join me and have them say that there is no problem with this 'ride'.

Do try it - there is a wide bench seat right in the middle of each pod so you don't have to stand on the edge looking down like most high places. That's its saving grace - you just sit and look out at the amazing views and feel completely safe!

And I'm someone who waited many years to ascend Eiffel Tower - only to get to the bottom of it on the bus and say 'OK, there it is, let's go somewhere else now!'