We went to see the Hadrian exhibition at the British Museum where an exquisite bust of Hadrian's Greek male lover, Antinous, provided a stunning centerpiece... 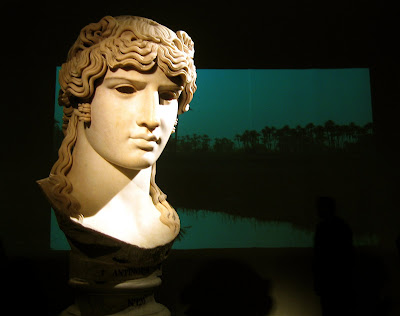 Details of Antinous' relationship with Hadrian are sketchy: according to one account Hadrian encountered Antinous when he and his entourage were accompanied him on his many journeys through the empire. A somewhat more romatic version tells how Hadrian (who was, incidentally married to Vibia Sabina, the grand-niece of his predecessor, Trajan) had the empire searched for the most beautiful youth, and chose Antinous.

The circumstances of Antinous' death during an imperial visit to Egypt are also vague: in October 130, according to Hadrian, "Antinous was drowned in the Nilus," but it is not known whether his death was the result of accident, suicide, murder or some kind of religious sacrifice. Whatever the truth, Hadrian was inconsolable and his grief for the loss of his lover and subsequently approved his deification.

Talking of Roman emperors: overheard by David in the exhibition:

"You know Jane? Well, she's got Marcus Aurelius
in her conservatory..."
Stuffed?

And here's Buttons' (somewhat limited) view of the exhibition.
Posted by Brian Sibley at 00:01

Memoires d'Hadrien, one of the best books of the history of literature... As a I know from a friend of mine (doctor in history), the death was a sacrifice, a self sacrifice.