The blog posting you've all been waiting for... 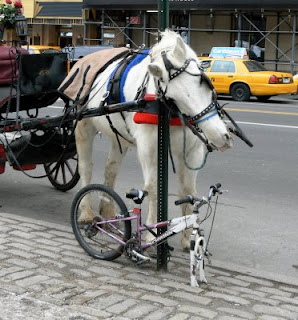 This was the photograph - of one of the New York Central Park carriage horses looking at an incomplete, parked bicycle - for which I requested suitable captions.

As usual, the Sibleyblog readership rose to the occasion with a plethora of amusing suggestions for what the horse might be thinking or saying.

Judging the entries on this occasion was She of Polkadots & Moonbeams, mainly as a punishment for not having entered the competition herself!

As always, the entries were judged anonymously.

There were, not surprisingly, some common threads: not just on the obvious theme of transportation but also on the subject of eating...

Anyway, here first of all, the runners-up in the order in which their entries were received...

"Well, if that's the competition these days I don't know what all the fuss is about..."

"Brrfff - I knew I shouldn't have eaten that Wagonwheel!"

"Hey there, gorgeous; do you come here often?"

"Not even a mule could get between the shafts of that carriage."

"Damnedest carriage I ever saw, no wonder the little fella did a runner!"

"Leave anything lying around for even a few minutes and parts get taken."

"Horseless transport ? Do me a favour ! It's got no chance !"

"OK, I'm going to count to three and we'll see who makes the end of the road first then, matey..."

"I know times are tough but he’ll never get his kingdom with that!"

"'Harold,' he said. 'I’ve got it,' he said. 'Why don’t you train Hercules to go out and pick up the scrap by himself. That way we can stay home, put our feet up and have a nice pickled onion...' You dirty old mmmmhhhhaaaaaaannnn!"

"Hay! Who left that there?"

"The front tyre would have tasted a bit better with a sprinkling of salt and pepper."

"I wonder if Chris Hoy is in town."


And so to the winners!

GILL
(with apologies to George Orwell)

"Hmm yes, very nice, but do you have anything with four pedals
and possibly even a front wheel?"

"Great! I have the dexterity to get the cap off
the Super Glue and then this happens."

Congratulations to the winners and thanks to everyone for entering. There'll be another caption competition in a few week's time!

If you missed last night's broadcast of The Narnia Code, the documentary based on Dr Michael Ward's controversial book, Planet Narnia and it's interpretation of C S Lewis' septet of fantasy novels beginning with The Lion, the Witch and the Wardrobe, you can catch it for the next seven days on the BBC iPlayer.
Posted by Brian Sibley at 00:01

Was anyone else distracted by Brian's ties on the Narnia Code programme last night?

Thanks for the honourable mention!

Congratulations on your appearance on last night's programme. It was good to see your note of scepticism towards the end, as the rest of the presentation was one-sided and uncritical. For those of us not so au fait with the material, it could have done with someone seriously challenging the "discovery" at an earlier stage to give the viewer a sense of debate.

On the basis of what we were told in the programme, the smile you gave us in your last comment summed my views up well and actually said a lot more than some of the other contributors' positive comments!

Thought you were terrific , and expressed mild disbelief in a very supportive sort of way! You also looked extremely distinguished!

As for the core premise....... I tried to care but couldn't. I'm sure there are more productive and exciting things for major academic brains to consider (no disrespect to Narnia).

I examined whether this improved my enjoyment of the books and it doesn't. Unless I was asleep for this bit, I didn't hear any reference to Out of the Silent Planet et al, thought that was a bit strange given the said core premise!

Anyway, you were great!

LISAH - Yes! Why did I change ties (and jackets) a couple of times?

Er... Well the truth is that the programme changed (as programmes do) and when more material about C S Lewis' childhood and pre-Narnia years was required, clips of an interview with me from an earlier documentary (shown in the USA but not here) were added.


SHEILA - Glad you enjoyed the sceptic's smile: it was honest of the director to leave it in. I had presented a slightly fuller critique of the premise, as well as (on the positive side) providing evidence on references to Narnian astrology in the books and reasons why Lewis might have been secretive enough to have hidden such a code within his work.

However, you are right, it did need more debate.

As in all programmes, much that was said ended up on the (now digital) cutting-room floor - but, I am told, may find it's way into some DVD 'extras' later for those who have the stamina to go through it again.


GILL - During my interview, there were questions about Lewis' sci-fi trilogy (as there was about the importance of astrology/astronomy in medieval culture) and all of that was, I'm sure, originally part of the programme but, as you say, wasn't there on transmission...

As I understand it, the additional biographical material on Lewis, was required in order to get what was (surprisingly to me as a sleepy-head) a 'prime slot' on BBC1.

I think the core argument suffered as a result - particularly as the links between the planets and the books was only examined in (I think) four out of the seven titles.

But many thanks to you (and LISAH and SHEILA) for watching and "extremely distinguished" I like!!

Wow, I'm honoured. Thanks for the contest! It was fun. I'm looking forward to the next one.

I missed the Narnia Code programme but the BBC iPlayer won't work for me - I'm in Ireland. Oh, I'm good enough to get their television, just not their interwebs.

Good standard as usual for the captions...may have recourse to the I player as I think my brain is going...
ALEEPRES: The language in which video timer instructions are written. So named after the small island in the Adriatic which still provides England with the majority of its local government officers.

Not just children books, but a really great history built from imagination and faith. Thanks and greetings for your blog! Scuse me if my english is not good.

Your English is far superior to my Spanish!

Hi Brian (and greetings from North Carolina!). Great to see you on the Narnia Code. It made me want to read Michael Ward's book, though I am initially sceptical. I have tested similar claims on the Gospels, patterns that appear too remarkable to be coincidental, etc., and usually random selections of passages can produce equally remarkable patterns. Nevertheless, it is intriguing enough and apparently well enough researched to be worth taking a look, from the sound of it.

Pleased to discover your blog, by the way.

Mark! Good to have you drop by! I saw your parents in Oxford in January and was, naturally, up-dated on your activities!

I agree with your thoughts on random patterns and, indeed, that may be all there is to Dr Ward's 'discovery'.