Time to reveal the results of the recent CAPTION COMPETITION which yielded a high turn out of quality captions making this a particularly difficult challenge for the judge, Polkadots & Moonbeams who, as usual, evaluated the entries without knowing the names of the entrants.

There were some recurrent themes such as sneezing and (not surprisingly) underwear, but there was great variety in the humour: surrealism, silliness, sexual innuendo and honest-to-goodness smuttiness!

So, here's a reminder of the image you were asked to caption... 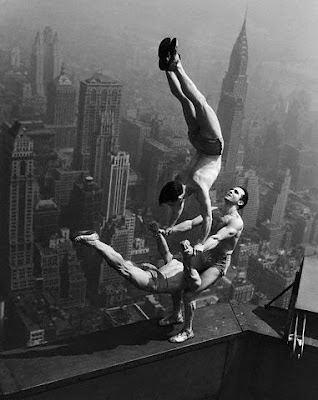 And here are the RESULTS beginning with a very worthy set of (alphabetically ordered)...

"Just hold that a second. Now look! You can see my house from here!"

"Say what you like, I still prefer good old Missionary myself."

"I spy a David Beckham sock if I'm not much mistaken...."

Man facing the camera: "Don't tell me now that the lighting is wrong... with this blue-screen, nobody's going to care, anyway!"

Man standing on his feet: "Watch out lads, I'm going to sneeze!"

Edward wished he had stuck to reading out facts about the Empire State Building in the guidebook and had never noticed the piece in The New York Times announcing that not enough men do spot checks for any physical signs of testicular cancer.

“Next time it’s my turn to be Fay Wray!

Unlike the previous, unfortunately accident–prone contestants, Larry, Barry and Harry hoped that they would only be a big hit with the judges.

"If this doesn't cure my back ache, nothing will!"

Horizontal guy: "Hey, great view from here, but I still can't see where your block is!"

"OK, so we've got the lift, all we need now is the music! Cop this one, Len Goodman!"

Dermot had heard 5th Avenue’s new chiropractors were unconventional but this was just taking the piss.

Day Three of the '2010 Sibley Calendar' shoot and the poses get ever more bizarre....

"Whose bright idea was it, anyway, to play Twister?"

"Glad that Viagra works on other appendages as well."

Although the view was spectacular, Gary was sure Larry and Harry were still punishing him for failing to arrange a fourth for bridge.

"OK, I'm looking closely, but I still can't tell which of these pants were washed in Persil."

Guy at the bottom: "Christ, Dave, you bring us all the way up here and this is the view I get?!"

After a busy morning stopping everyone from having fun, New York’s Health & Safety officers take the rest of the day off.

Selected (in the words of the judge) for "wit, context and general pants-awareness"...

"Once it was enough to just wear a pair of underpants to get into the Sibley Blog!"


Thanks to everyone for joining in! Great entries all round! Note to self: Must have more caption competitions in 2010...

I notice MUIR has just left a entry on the original post...

"Is that a Calvin in your Kleins or are you just pleased to see me?"


Well, you certainly popped it in alright, Muir, but just a bit too late to be in with a chance...

But thanks for sharing! :-)

3rd place! Woohoo! And with so many great entires too :)

Can't wait for another one Brian :D

I think we could all do this for a living ! Some really funny ones...

Those are better results than anything I got at school. Yippee!!

That was great fun (even though after the second or third batch of emails I kept forgetting the names of the trio).

More caption competitions for 2010 would be not just ace but ace and skill.

Of course it all depends if can I survive another of my sis' Christmas dinners.

Well done, ANDY, BOLL and GOOD DOG! As for doing this for a living, maybe we should start a greetings card company producing cards with old/odd photos and a set of optional stick on captions...?