Those nice people at the BBC website have heeded my complaint about illustrating my radio dramatisation of John Bunyan's The Pilgrim's Progress (currently accessible from Radio 7 via iPlayer) with a picture of the first Pilgrim Fathers... 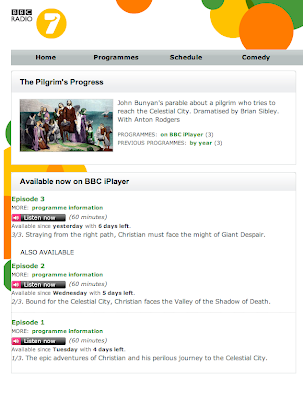 Click on images to enlarge
Those transatlantic tourists - an understandable error occurring, as it did, in the run up to Thanksgiving - have now happily made way for by an illustration of the maidens residing in the House Beautiful (Discretion, Prudence, Piety and Charity) getting Christian geared up in the Whole Armour of God before heading off on the road to the Celestial City... 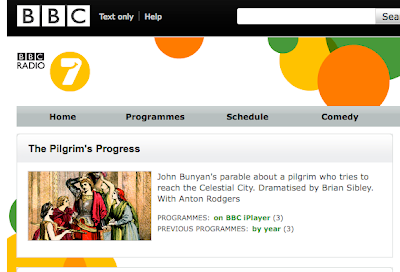 This military attire comes in rather handy when, not long afterwards, Christian runs into a demonic creature named Apollyon... 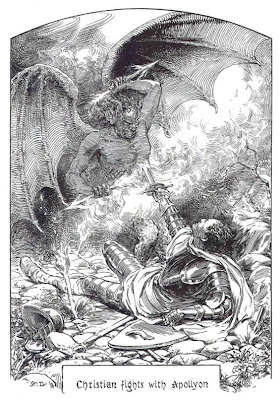 Of course, the didactic nature of Bunyan's book is not to everyone's taste, but I think (hope) that my version - told, as it is, within the context of Bunyan's own trials and imprisonment, captures the spirit of his Christian apologetics while opening up the story to a slightly more contemporary interpretation.

Anyway, many thanks for the amendment, BBC: it is much appreciated!

I could, of course, quibble about the difference between what the website describes as a 'parable' and (what The Pilgrim's Progress actually is) an 'allegory', but that would be lacking in, if not piety, then at least discretion, prudence and charity!
Posted by Brian Sibley at 11:05

Love those old woodcuts Mr B ! Yes, your version brings something to life that I wouldn't have found accessible otherwise.
Reedness: The feeling that comes over one after a surfeit of Christmas shopping

The thing about the old woodcut illustrations is that - wonderful though they are - they do lock the story off in a time that is so obviously not ours and, therefore, seems instantly antiquated and irrelevant. I first met the story through a series of '60s Scripture Union film strips that used very contemporary illustrations (cut out montage figures) by Gordon Stowell...