Consult the work of two of the finest Tolkien illustrators, Alan Lee and John Howe, and you will find depictions of the Great Goblin, ruler of Goblin-town in The Hobbit that look, from Mr Lee's perspective, like this... 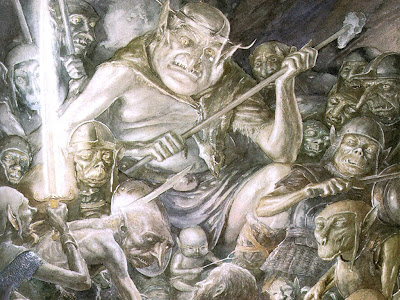 And, from Mr Howe's point of view, like this... 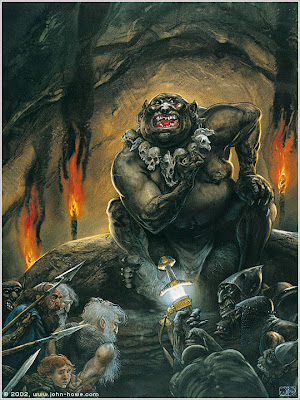 Surprising then, perhaps, that – according to breaking news over the weekend – in Peter Jackson's forthcoming film, this unpleasant character could look like this... 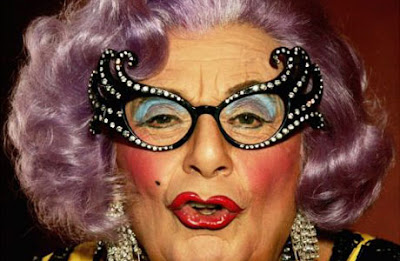 Well... maybe not... but, possibly, with one or two of the repellent character traits exhibited by that other monstrous character, Sir Les Patterson... 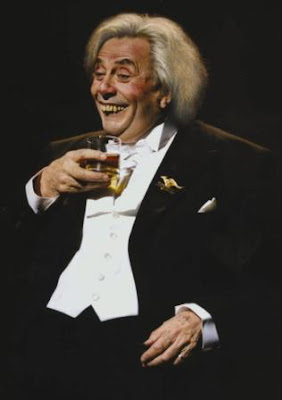 To justify the casting of Barry Humphries, we must assume the role has been substantially written-up for the screenplay (in Professor Tolkien's book, the Great Goblin is dispatched in next to no time by Gandalf), but when one remembers that Humphries' acting career on stage and film has included a number of larger-than-life characterisations other than Dame Edna and Sir Les – Long John Silver, Fagin, Estragon in Waiting for Godot and Mrs Crummles in Nicholas Nickleby – his Goblin King is likely to wear his crown, however briefly, with a good deal of goblin pride.

"Murderers and elf-friends!" the Great Goblin shouted. "Slash them! Beat them! Bite Them! Gnash them! Take them away to dark holes full of snakes, and never let them see the light again!"
Posted by Brian Sibley at 01:46

I read about Peter's casting choice earlier today and was wondering just who this guy is, and here you go answering my question without ever being asked! Thanks Brian! (Just to save you some trouble, I already know who Evangeline Lily is).

There's got to be a joke in reference to Christina Rossetti's GOBLIN MARKET somewhere here. (But I'm not going to make it...!)

Two blogs running you feature men I cannot stand! I am feeling persecuted! Please could we have a blog about Johnny Depp or Nigel Havers or Raffa Nadal? Am I giving myself away here at all?!

The Duchess though enjoyed the illustrations and believes they may be close relatives of her Great Uncle Horatio, I wouldn't be surprised!

Geno – You can read more about Mr Humphries (possibly Australia's first and only dadaist and absurdist) here and, if you are unacquainted with his alter ego Dame Edna, you can meet her here.

Dear, you should not stay so late,
Twilight is not good for maidens;
Should not loiter in the glen
In the haunts of goblin men..."

Mind you there aren't many maidens in The Hobbit: not sure, in the book, there were any (except among the folk of Lake Town), but PJ seems to be addressing that deficiency with the casting of Evangeline Lily...


Gill – No Johnny Depp, as far as I know, only Orlando Bloom, but I'm not sure if that's close enough – probably not! Of course, I haven't had the honour of meeting the Duchess but, from what I hear, I wouldn't be surprised either!