I was saddened to hear of the passing of John Moffatt, a greatly talented actor whose career embraced stage, film, television and radio where he was the perfect embodiment of Agatha Christie's celebrated Belgian sleuth, Hercule Poirot. 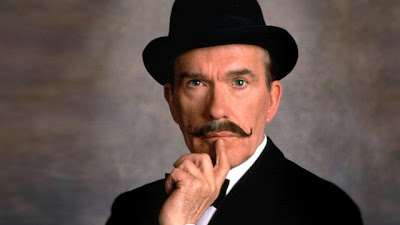 His extraordinary range embraced everything from Shakespeare and the classics to pantomime and revue – notably his memorable performance in the Noel Coward tribute show, Cowardy Custard.

Radio was an especial love and my friend Jeremy Mortimer quotes John as saying that radio acting was like Japanese water colour painting - deft and speedy.

I can testify to his mastery of that technique from the one time we worked together, back in (I think) 1990, when I compiled a 90-minute show for BBC Radio 4 featuring songs and sketches from the revues of the 1920s.

Entitled Hit the Heights, it was produced by the wonderful Glyn Dearman and starred John Moffatt, Una Stubbs, Nickloas Grace and Charles Kay with a special appearance by the legendary Miss Elisabeth Welch.

John acted as compere, appeared in several sketches and, accompanied by Richard Holmes, sang the two numbers uploaded here and which I hope John's many admirers (and all my readers) will enjoy...

First is the comic song 'And Her Mother Came Too' by Ivor Novello and Dion Titheradge, originally performed by Jack Buchanan in the 1921 Andre Charlot revue, A to Z...


...and here is Noel Coward's autobiographical ballad, 'World Weary', first performed by the composer in the 1928 revue, This Year of Grace....

In compiling Hit the Heights, I examined the original scripts archived in the Westminster Library as part of the Lord Chamberlain's papers. These contained the blue pencil deletions and changes made under the then theatrical censorship laws.

For a more tolerant age, I restored many of the cut words, phrases and innuendos but I was, until now, unaware that the lyrics to World Weary had also been censored with the line: "My loving friends will not be there, I'm so sick of their darnn-fool faces" being a substitute for the original "...God-damned faces..." An unhappy Coward complained: "This compromise, while soothing outraged public opinion, weakened the song considerably."

I dearly wish I could have had John sing it as Coward originally intended.

He also appeared in that wonderful television series, Private Schulz and arranged the Fond and Familiar recital programme in which Judi Dench appeared several times.

'Hit the Heights' is a real departure for you but a little known gem. Your regular followers would love to hear the whole show I'm sure :-)

SharonM – Thanks for the reminder of some of John's other work.

Boll – How kind, Mr Weavil! As my official archivist, you don't happen to have an original transmission date for the show, do you?

I saw him recently on DVD for the first time as the flamboyant Lord Merlin in "Love on a Cold Climate" - wonderfully creepy.

He was excellent on Radio in so many roles, but of all of them my favourite was a very precise Sherlock Holmes to Timothy West's Dr Watson in Glyn Dearman's production of "Sherlock Holmes vs Dracula" The latter is still being aired occasionally on Radio 4 Extra

Yes, Michael, John was a multifaceted player and worked many times with Glyn Dearman – hence his appearance in my Hit the Heights, in which he was the ever-adaptable and gracious 'glue' holding together a charming, but basically insubstantial, piece of frippery.

Much hunting has not given me a date for broadcast beyond that which you referenced - 1990. Pity.
It has inspired me to take a listen though and your audience deserve the chance to hear it in its entirety I think. You should post it ! I like it as a whole piece...even the introduction you so despised...

Boll – I may post it all: the trouble is two-fold – the time (and cost) involved in uploading such a long programme to Soundcloud. I'm also not sure that any of my readers will listen to a 90 minute show on the blog. For example, I don't think anyone listened to my Terry Pratchett interview that I recently posted...

However, in the meantime, I will be posting a couple more extracts from Hit the Heights.

And, yes, you are right about the framing device (written by A N Other) that I disliked at the time (but which was part of a style that linked a week of plays and shows): it wasn't that bad!! :)

Well Pratchett has never been my cup of tea anyway and I only found this blog whilst googling 'pooh norman shelley' as I'd like to get his Argo readings. I did have them once on cassette but lost them. Thank you for Three Cheers by the way. I also enjoyed Humbug and the Moffat tracks.
I'd love to hear all of Hit the Heights and thought maybe you don't have full control over it (posting clips is OK under fair use I believe?).
Thanks also for many of the shows you've made for the beeb by the way. Tolkein has never been my bag either but I enjoyed the Gormenghast shows from the 80s as well as the recent Classic Series 6 parter.

Hi, Jake, thanks for the mixed (but honest) reviews! Much appreciated! Not sure about posting the whole of 'Hit the Heights', I would need to be able to afford to buy more space on Sound Cloud first; but there will be a couple of Elisabeth Welch numbers coming up soon.

Really pleased to know that you enjoyed my two forays into Gormenghast... :)

Thank you for replying Brian.
I have just checked the Soundcloud site and it's pricing. I didn't think it would be that expensive. If I was richer I'd make a donation if you promised to upload the complete Hit the Heights!
Have you uploaded the Elisabeth Welch numbers? I couldn't find them earlier. I did have a listen to Humbug. Great stuff thanks. One never tires of A Christmas Carol.

I will do the whole show, but I am having serious internet problems at present and need 90 minutes to upload the show which, with drop-outs, is not easy...

Thanks once again Brian.
Not that I'd like to hear Hit the Heights before but it would make a great Xmas present. That gives you a couple of months! ;)