So remarked King Arthur (according to Tennyson) from the deck of the death-barge to Avalon.

And, of course, His Majesty was spot on - except for one detail: to wit that the "old order" is constantly changing, not just with the comings-in and goings-out of kings...

Let me give you an everyday example from the Homelife of a Nobody...

Savlon Disinfectant Liquid (Protection from bacteria in the home) now boasts a 'Powerful Thicker Formula' and, of course, we are well used to those kinds of changes. After all, in advertising terms, the concept of the NEW IMPROVED FORMULA has been with us almost as long as that of the OLD (or ORIGINAL) FORMULA!

But the real surprise comes when you unscrew the top... 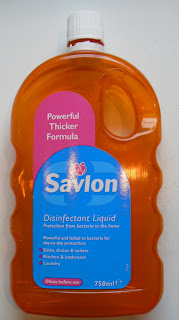 Now, the thing about Savlon was that it was ORANGE-coloured and went cloudy-white in water. This was a given; as was the fact that if you let so much as a single drop drip on your white bath mat it was stained - for LIFE! I mean, like turmeric only worse...

Savlon is now comes CLEAR, stays clear in water and can be sloshed indiscrimantly about your bathroom with no ill-effects to your bath mat, apart from a certain dampness and a decidedly disinfectanty smell...

Because, presumably, there are still so many of us around who remember Savlon in it's ORANGE incanation, the manufacturers have decided that they need to sell it to us in ORANGE-coloured bottles!
Posted by Brian Sibley at 00:01

And how lovely that the thing actually is new and improved!

I feel obliged to point out that turmeric stains are easy to remove if you wet the stain and then expose it to sunlight for a few hours.

Personally, I've never gotten over the change from Marathon to Snickers. See, to my ear, Marathon really did satisfy in a way that Snickers does not.

And Immac was a much better name that Veet. I'm less worried about Opal Fruits becoming Starburst.

Actually, my initial thought on seeing the topic of this entry was "There are a few old orders I would love to see changing. Well, one in particular ..."

QENNY - Thanks for the info on turmeric...

And what about Savlon stains? From the old orange stuff, I mean...?