CHIP OFF THE OLD BLOCK

How often do you ever get to meet one of your childhood heroes and find them utterly unchanged? Inevitably, the handsome hunk is now pot-bellied and bald, the glamorous pin-up has become grey and scrawny.

But yesterday, I met someone with whom I was obsessed as a child and who, happily, doesn’t look a day older than how I remember him from fifty years ago…

His name - though it will only be familiar to British readers of a certain age - is ARCHIE ANDREWS. 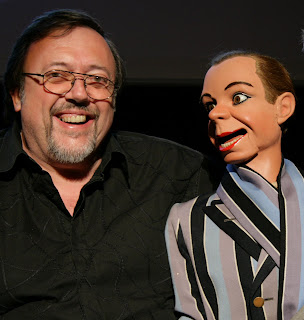 For those in need of an explanation, here it comes… 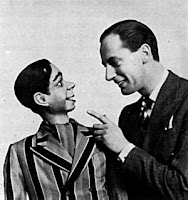 Archie Andrews was the ventriloquial doll of entertainer Peter Brough, whose BBC comedy programme, Educating Archie was, for over a decade, the nation’s favourite radio show.

Today, that is a cue for people to guffaw at the notion of a ventriloquist on radio. But those of us who tuned in every Sunday lunchtime to hear Archie’s quick-witted banter with his guardian - always referred to simply as “Brough” as if he were merely the butler - know that Archie’s success had very little to do with the art of ventriloquism and everything to do with character…

Like his famous predecessor on American radio, Edgar Bergen, Peter Brough created a character that, quite simply, we the listeners loved and the limitless boundaries of a purely audio medium meant that Archie (like Bergen’s sassy side-kick, Charlie McCarthy) could get up to all kinds of exploits that didn’t require any literal, physical support from the vent. Freed in this way, Archie was able to overcome his Pinocchio syndrome and - to millions of listeners - was no longer a woodenhead, but a real boy!

"Millions?" you ask? Yep! FIFTEEN Million listeners a week, making Brough one of the top-paid entertainers of his era and requiring Archie to be insured for £10,000.

Educating Archie, was written by some of the finest scriptwriting talent you could name: Eric Sykes, Ronald Wolfe and Ronald Cheshney and, later, Marty Feldman. And the supporting cast became stars in their own right while their catchphrases entered the lingo of the nation’s playgrounds.

One of Archie’s earliest tutors was played by Tony (“Flippin’ kids!”) Hancock before his move to 23 Railway Cuttings, East Cheam and the odd-job man was Max Bygraves, whose quoatble sayings included “That’s a good idea - son!” and “I’ve arrived, and to prove it, I’m here!”

Fourteen-year-old Julie Andrews was Archie’s girlfriend and the resident singer; Hattie Jacques was Agatha Dinglebody and Beryl Reid was variously Monica, the adenoidal schoolgirl and Brummie Marlene with habitual greeting, “Good evening, each!”

Among others involved over the years were Bernard Breslaw ("Hello, it's me - Twinkletoes"!), Dick Emery (“I hate yew!”) not to mention the likes of Bruce Forsyth, Sid James, Gilbert Harding, Alfred Marks and Harry Secombe. 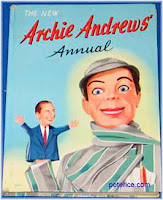 I listened to the weekly show (and later watched Archie's antics when he moved onto TV) and I did my best to collect whatever Archie Andrews merchandising I could find. I especially treasured my Archie annuals -- at least until my Mum gave them away to a totally undeserving cousin!

Even after Brough and Archie retired in 1961, I clung on to fond and happy memories of those rib-tickling shows and in adulthood wrote Peter Brough a seriously belated fan letter and asked him to sign my copy of his autobiography called, naturally, Educating Archie…

Then yesterday, as part of this year’s Magic Circle Heritage Weekend, magic-and-show-business historian John Fisher (whose most recent book is the acclaimed biography of comedian Tommy Cooper Always Leave Them Laughing) included in the programme a passionate tribute to Educating Archie and - though I scarcely dared to believe it true - invited the star of the show to make an appearance along with his present guardian, Colin Burnett-Dick, who bought Archie at auction (for £34,000) following Peter Brough’s death in 1999. 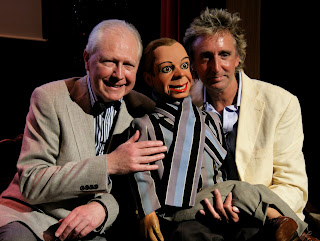 John Fisher, Archie and Colin Burnett-Dick
It seems that Archie and Colin are busily cooking-up a comeback for Master Andrews and, if they are successful, then I hazard a guess that there'll be a sizable bunch of 50-somethings who will be totally overjoyed.

Meanwhile, yesterday, Colin allowed Archie to spend a bit of time greeting some of his fans who, while they may not have worn quite as well the young man himself, were still clearly kids at heart! 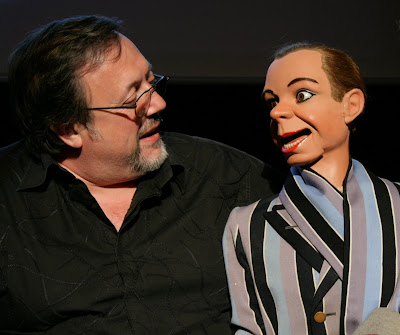 Getting the opportunity to meet Archie face-to-face raised some interesting thoughts about the power of puppet personality and the Promethean nature of the puppeteer.

Unlike most vent dolls that seem dull and lifeless until given animation, Archie, unquestionably, gives the illusion - even in repose - of being vibrantly "alive". This, perhaps, has something to do with the sculptor's craft, for he has the most arresting expression - largely as a result of those wide, glistening eyes - but, more than this, the puppet seems to have absorbed, and to still embody, some essence of the personality of the puppeteer who first gave him life...

Or so it seemed to me... And why not? After all, the oldest myth in the world is that of creation, where a deity takes dust - the very stuff of the earth - and, with it, creates man. There is, surely, a sense in which every artist is a sub-creator, taking dust - in the form of wood, stone or pigment - and with them creating lifelike images. The puppeteer, however, takes one step nearer to the gods and, like Pygmalion in the story told by Ovid, seizes the power to imbue the image with every semblence of life itself.

But now I am now straying into mysterious terriority that should probably be left to learned professors of some such subject as 'totemic symbolism'! 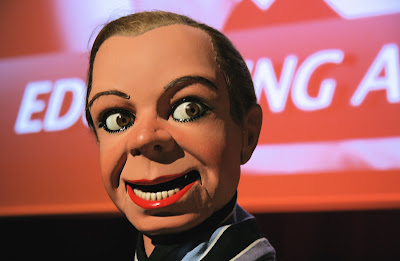 Archie also met up with Another Media Celebrity who, like Archie, can also waggle his ears!

Great pics - and I suppose he looks marginally better preserved than most of us fifty-somethings.

I wonder, when he was looking at you Brian, if Archie was thinking - "Did he decide to play safe and not wear a tie, or has disaster struck again?"

LisaH - Very funny! Actually, I think he was noting (from the absence of scarf) that we didn't attend the same Old School!

Don't know about totemic thingamjigs, but lots of dummies (and dolls) in movies have a life of their own. Dead of Night, Magic, Riabouchinska (in the Hitchcock TV series). Now I think of it, clowns often turn out to be evil as well. What is it with these comedy turns that wants us to be scared of them?

Oh, I tried to read it, Brian, I really did, but I couldn't get past the pictures. He just freaks me out! Ventrilquism (sp?) is up and down frightening to me.

CAFRINE - Sorry about the nightmares! :-(

I thought, looking at the photos, that Archie had a bit part in the Pet Shop Boys 1987 movie "It Couldn't Happen Here", but I can't find him on the cast list in IMDB. And a voice in my head is saying "David Lynch".

QENNY - You've seen the photos of David Lynch as a young man, then...

I'm like Cafrine: I can't bear to look at the pictures. They really scare me. :-(