"MANY PEOPLE THINK THAT MARMALADE IS NICER"

A few months back, I wrote about my love of marmalade - rivaled only by Master Paddington Brown - and my good friend (and occasional blog-post-comment-leaver) JEN sent us a jar of her absolutely excellent home-made Dundee Marmalade. 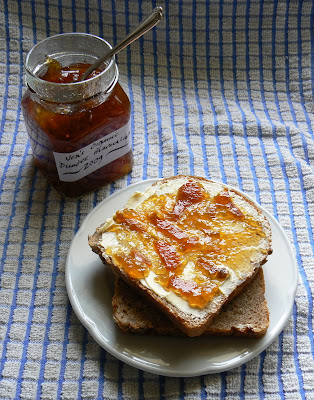 Someone once said, that "Oxford gave the world marmalade and a manner, Cambridge science and a sausage."

Now, whilst I'm not aware of ever having sampled a Cambridge sausage (though I am prepared to accept that they may be quite exceptional) I do know that Oxford-style marmalade is very good indeed, and has - until now - been my breakfast spread of choice!

However, having now tasted Jen's Dundee variety, I'm prepared to change my allegiance to the marmalade-makers of Scotland who (if Jen's recipe is anything to go by - and I'm sure that it is!) know just about all there is to know about turning out a mean jar of the orange stuff!

Essentially, I think, marmalade (whatever part of the British Isles it hails from) is one of the major comfort foods --- with attitude!

I adore its tongue-tingling combination of the sweet and the sharp and I think I understand what D H Lawrence was getting at when he wrote: "I got the blues thinking of the future, so I left off and made some marmalade. It's amazing how it cheers one up to shred oranges and scrub the floor."

There is, of course, only one caveat and that was expressed so eloquently in A A Milne's ditty about 'The King's Breakfast': "Marmalade is tasty if it's very thickly spread..."
Posted by Brian Sibley at 00:01

I'm wondering if you keep marmalade sandwiches in your hat, and if your hat has any very special marmalade stains thereon...

That does look delicious. I lived on the upper floor of my voice teacher's house one year, and one memorable day she made marmalade. The fragrance throughout the house was pure heaven! (Heaven-scent, one might say...)

On the audio-book version of Julie Andrews' Collection of Poems, Songs and Lullabies, released October 6th, Dame Julie and her daughter Emma Walton Hamilton read The King's Breakfast in delightful antiphony, with Dame Julie doing the narrative bits, and Emma putting in all the different characters' voices.

But, what fruit?, orange, peach, apricot?, I see that it's orange.

Brian, I love marmalades too, when a see in my supermarket a new kind of marmalade I taste it, the last one was raspberry and apricot 75% of fruit... delicius.

But, as the chocolate and other things, I only taste that wonderful slice of toast of your photo once a week, the week-ends.

Mr B.Thank you for the kind remarks about which I couldn't possibly comment! SCB perfectly describes the aroma. For Eudora, the fruits are sweet oranges,lemons & for that edgy zing, Seville oranges!They are around but for a short while, late Dec-Feb so I wonder if Lawrence wrote that in winter. He's right about the positive effects.
SYLIKERI:dance celebrating a good harvest

Oh dear no Brian, it's jam all the way! Mind you, my favourite jam is apricot, which is really just a stone's throw (see what I did there?) from marmalade.

On a subject far from (or perhaps close to) this, as an animation enthusiast, have you heard of the plans to remake "Who Framed Roger Rabbit"? Not right, not right at all....just like marmalade :P

The only marmalade I like is ginger marmalade, but as I have to have that with lashings of butter, I tend to try to avoid it altogether! Living in Belgium, it tends to be more (and I do mean MORE!) chocolate spread!gortabir: the Belgian answer to peanut butter - speculoos spread (yuk actually)

Brother Roger
CUNDEC: The sundeck on a cruise liner

I suppose I have marmalade more than anything else on my toast, though I do like chocolate hazelnut spread, peanut butter and apricot jam too.

The most special treat for toast I've had, was jam given to me by Ian (Richardson) which he and his wife Maroussia had made at their home in Devon. Maroussia made labels for all the jars which had a picture of their beautiful Devon home (a converted cider farm) on it.

Eudora - marmalade is only made from oranges and/or lemons and/or limes. Any other fruit is not marmalade - it's jam!! Or preserve if you must...

And no one has mentioned the travesty parading on our shelves at supermarkets - peel-less marmalade? No, no, no! Marmalade must have lots and lots of thick peel. Dark and thick....a recipe for marmalade and not for the opposite sex!

Thank you Jen and Diva for the information. (Jen, I have oranges and lemons in my orchard, I`ll try this winter make this recipe).

Well, I didn't remember the subtle difference between this two words, in spanish there is no difference except that we have two words: "mermelada" y "confitura", and confitura is the word for the jam with pieces of fruit. And peel in the jam only with some fruits like orange or cherry, never with apricot or peach ( I always peel the peaches).

Can you see Brian?, how pedagogical is you blog?, and international... I owe so much to you and your blog friends. ;)

OK the Yank has to ask.... Marmalade is always made with oranges? and ginger?

'Classically', yes, but there are also recipes using other citrus fruits: lemon, lime, (or lemon and lime), tangerine and even grapefruit!

There are also many varieties: some dark gold and bitter, some pale orange and sweet; some with thin cut peel, others with thick cut peel, some with no peel at all!