Sorting through the effects of our late friend, Ali Bongo, we came across a curious find: a winkle shell filled with wax and a membership card of the Hastings Winkle Club.

Click on the image below to enlarge and read the hilarious club rules... 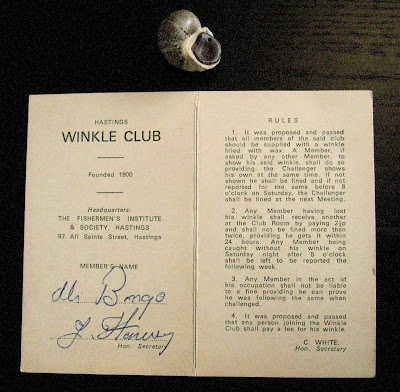 After we'd finished laughing, we consulted Professor Google and discovered that, 109 years on, the Hastings Winkle Club is still going strong. 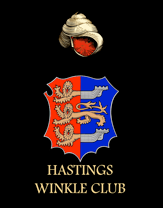 In fact, it turns out to be an internationally famous charitable organisation originally formed by Hastings fishermen to help the under-privileged families of Hastings Old Town.

The club's headquarters, opened in 1882, is located at the Fishermen's Club: a building given in trust for the use of Hastings Fishermen and initially used for the making and repairing of nets.

Winkle Club members have included some illustrious personalities such as HMs the Queen and the Queen Mother, Lord Montgomery, Sir Winston Churchill, the Duke of Windsor and a number of showbiz personalities of which Ali was obviously one.

Each Winkle Club Member (or 'Winkler') carries a winkle shell which they must produce when challenged to 'Winkle Up'. Failure to do so results in a fine which goes towards local charities.

You can read more about the history and work of The Hastings Winkle Club here.

Time, now, to lower the tone (if that is possible!) and remind you of that saucy old music hall number -- all together now -- I Can't Get My Winkle Out!

Take it away, Paul Carr! And, please, everyone, feel free to join in and sing along...

So, have you and David applied for membership of the Winkle Club?
Thanks for the song - makes for a cheery start to the day.

Having had to clear both parents' houses in the last 2 years I don't envy you clearing Ali's, though it must have been more interesting: rabbits popping up out of hats, doves out of tail suits, hidden mirrors everywhere, false walls (OK, Roger, that's enough!)

SHARON M - Think you're gonna winkle that out of me? No chance!

ROGER - And, don't forget, all those rabbit and dove droppings!