Anyone see last night's episode of Doctor Who?

Written by no less a luminary than Richard Curtis, it had the Doctor and Amy helping Vincent Van Gogh destroy a mostly invisible alien chicken-monster that was rampaging through the cornfields disturbing the crows, peeping out of the windows of the church in Auvers and generally giving the ear-slashing, suicidal painter a bad case of manic depression? 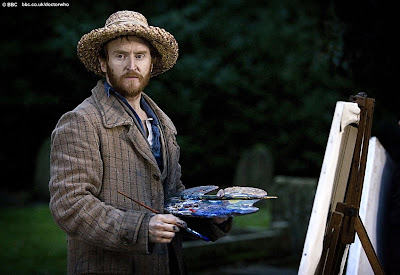 At the end of the programme, a sensitive, caring BBC Voice offered a telephone number for any viewers who felt in need of help or for whom the programme had raised issues or concerns that they would like - in confidence - to discuss.

Well, frankly, yes I did! I wanted to know how anyone had allowed this dull, boring, misbegotten, self-indulgent, pile of Gallifreyan garbage to ever get on air!

Labels: Doctor Who, Dr Who, TV

since we poor yanks are always browbeaten with how much more clever, funny and original British tv is than American tv (half our programming is supposedly dead-on copies of British shows) it is reassuring to know that the British are equally capable of producing dreck. (even if it is poor Dr. Who)

I hardly know *what* to say about the spoiler which you just presented to those of us on the other side of the pond. Doctor Who often has a message but usually not so, errr, uhmm, blatant? And in such a seemingly tepid storyline.

It will be extremely interesting to see whether a US-based message is inserted.

Hear! Hear! The announcement at the end of the episode was the icing on the cake of 45 minutes of pure garbage. It was like RTD had been allowed back to commandeer an episode. The "Van Gogh gets to see how succesful he becomes" nonsense was typical awful saccharine, sentimental Curtis which was allowed at the expense of any kind of Who continuity or even common sense to the story and his life.

There have been quotes from Curtis about Moffat having repeatedly told him his script was too talky etc. I dread to think what the first draft was like if what was broadcast was the "polished" result after all that feedback. Very thin nonsense that had nothing to do with conventional Who and broke too many rules established in the past.

Still not sure what was more depressing - the episode itself or the Curtis fans on Twitter all saying how good it had been. :-(

I'm afraid I rather enjoyed it. The alien aspect of the story was a bit weak, but I loved the idea of what happened near the end (won't say exactly what in case there are folk still to see it).

Firstly many apologies to CHRIS and CHUCK in the USA (and, indeed, to anyone in the UK who might still have been planning to watch this episode) for forgetting to add a 'spoiler' warning! Sorry, guys.

I would be interested to know, Chuck, whether the American broadcast also carries a follow-up announcement. And yes, Chris, we can produce our share of drek - as this particular episode proved in spades.

IAN - I knew you'd agree, just wish we'd been watching it together so we could have screamed at the box in unison!

There was so much about the show that was appalling: I might have overlooked the decision to give Vincent a Scottish accent; the appalling twee moments (such as Amy giving Van Gogh the idea of painting sunflowers); the nonsense (and waste of talent) in having Bill Nighy play a preposterous English art curator working in the Musée d'Orsay; the expense of location-filming in the Paris gallery while using crummy sets for other scenes and a risible sequence where a very Englsih Parish church is passed of as the quite different one painted by VVG in Auvers; BUT...

...the worst of it was (sorry, SHARON M, but I'm with Ian on this), the idea of taking Vincent to see his paintings in the d'Orsay and realise just how appreciated he was going to be in posterity.

Did anyone stop - even for a nanosecond - and ask why, with this new understanding of his worth as an artist, Vincent then decided, a few months later, to turn a gun on himself? I think not.

I agree, Sharon, Matt Smith is doing well and I really like his Doctor, but he was poorly served by last night's drivel and the tedious running 'joke' of him putting Vincent off painting by reminiscing about encounters with other great artists (such as having told Michaelangelo to get over his fear of heights and get on with the Sistine Chapel ceiling) was cheap and puerile.

I just hope the staff of the Musée d'Orsay can cope with all those tourists who'll now be asking why the sunflowers painting doesn't carry a dedication to Amy!

I hope the folk at the BBC help-line were able to help you with your distress, Brian.

I'm not a Dr Who purist, so I'm with SharonM - I quite enjoyed it, although I did think the basic story was rather weak. I thought David Tennant was a good Who, and was rather agin Matt Smith before he started, but I have enjoyed each of the episodes he's been in so far: not as great art or routes to the meaning of life, the universe and everything, but as some rather fun light entertainment.

I know it's not meant to be a "route to the meaning of life", SHEILA, and I take your point that it's probably pointless to place too high an expectation on a "light entertainment" show, but it still ought to follow it's own internal logic and continuity (established over the past 47 years) such as never having the Doctor meddle with the events of history.

I also couldn't help wondering what younger viewers - many of whom probably don't know or care who VVG was - would have made of it. Did in incite them to an interest in art or was it just rather boring episode featuring a rubbishy monster that was not seen quite a lot of the time?

I was rather stunned by the notion of The Doctor taking van Gogh briefly to the future. If something COULD "change history," an action like that could. And the Doctor usually avoids this in famous situations.

That said - I thought this episode did a good job of showing severe manic-depression. Unlike many conditions, a person can sometimes be raving one minute and perfectly lucid within hours, seemingly randomly. The episode showed this very well. The Doctor didn't hand Vincent many years' worth of psychotropic drugs and send him home. So even having the information that he was going to be a famous actor in the future, that information would not have been enough to "cure van Gogh." I didn't find this episode nearly as depressing as "Amy's Choice" or the one with the death of Rory.

Now there's a "Points of View" comment if ever I've heard one!

I've never been a fan of the Doctor, so I'm glad to hear an rare negative opinion of an episode!

Brian, I'll grant you the rubbishy monster - we thought it had the look of a rubber chicken!

LAURIE - I really mustn't get boring about this, but...

Whilst there's nothing wrong with dealing with the topic of manic depression in a series like Doctor Who, I'm not convinced that turning the 'black dog' into a goofy, see-thru alien is that helpful.

I agree that the episode featuring the death of Rory (who I was just getting used to as a foil for the Doctor/Amy duo) was far more powerful in touching on feelings of loss in bereavement and yet didn't have the follow-up counselling service.


ANDY - On this occasions, glad to oblige!

I just caught it on BBC3. Oh, dear God! Now that RTD has just gone away and Mr Moffat has taken over I've actually been watching the show and really enjoying most of the episodes.

But this pointless nonsense with the invisible chicken monster... It certainly did raise concerns. Then again I've never been a fan of Richard Curtis so I wasn't expecting any special. The end result was far, far less than I expected.

GOOD DOG - In fact, the only thing that was missing from this mess was Julia Roberts! :)

I am predisposed towards quite liking Dr Who, but this episode was, indeed, garbage.

For a moment I thougth you were joking Brian... I see, the bad tv is around the world, not only in my country...

It's always easier to criticise the bad than to praise the good, but this was in need of criticism!

I have to agree. The worst episode of the season. But the lovely "Lodger" more than made up - warmhearted & funny, it was everything Van Gogh should've been. If they wanted to do an ep about depression, nix the space chicken & have the guts to just do it!

I agree, PRE-RAPHAELITE, but did you notice the Van Gogh postcard on the fridge door and the Van Gogh drawing on the Doctor's bedroom wall...?!

Ha ha - I missed those easter-eggs!

Maybe it'll all add up to some insanely complicated 'Moffat Master Plan' in the last season ep...? Or not. I have to say, The Moff has touched my inner Who-Geek in ways no one has since Cartmel hit his stride.