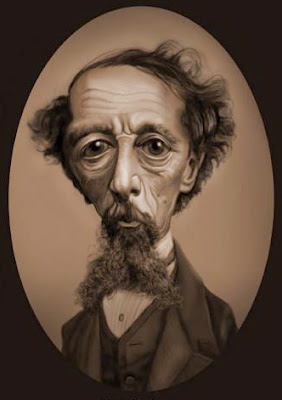 Anyone who has ever read this blog during the month of December will know that I invariably write something about one of my all-time favourite books, Charles Dickens' A Christmas Carol *, the story of how Mr Ebenezer Scrooge – "a squeezing, wrenching, grasping, scraping, clutching, covetous, old sinner" – was reformed of his miserly ways and brought to understand the true meaning of Christmas and to experience its joys.


First published on this day 167 years ago, in 1843, it was described by the reviewer in the London literary magazine, the Athenaeum as "a tale to make the reader laugh and cry – to open his hands, and open his heart to charity even toward the uncharitable..."

The poet, Thomas Hood, wrote: "If Christmas, with its ancient and hospitable customs, its social and charitable observances, were ever in danger of decay, this is the book that would give them a new lease. The very name of the author predisposes one to the kindlier feelings; and a peep at the Frontispiece sets the animal spirits capering..." 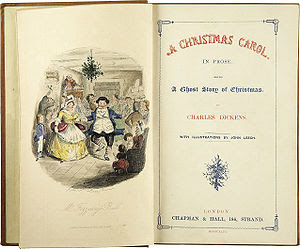 I wrote a whole book about this book (long out of print now, it was called A Christmas Carol: The Unsung Story) and the idea for that volume grew out of many years of collecting various versions of the Carol in all types of media and a radio programme that I wrote and presented on BBC Radio 4 (according to my Archivist and fellow Caroller, Mr Boll Weavil) on 22 December 1987.

On Christmas Day, 1993 – to mark the 150th anniversary of the original publication – a revised version was broadcast and since most of you will have never heard it, I'm posting a recording of it here on today's blog.

So, make yourself a nice cup of tea (or a tankard of mulled wine), warm up a mince pie or two, put your feet up and get into the spirit of the season with what, I hope, is still an interesting account of how and why Charles Dickens was inspired to write what is, surely, his most famous book and savour of some of the many interpretations – the good, the bad and the downright ugly – that have been perpetrated over the years.

You'll meet Mr Scrooge, his seven-years-dead partner, Jacob Marley, Bob Cratchit, Tiny Tim and the Ghosts of Christmas Past, Present and Yet to Come in a Dickensian celebration entitled, quite simply...


There have been many new interpretations of Dickens' story (in books and on stage, film and television) since this programme was last broadcast, and on Christmas Day this year, the BBC's Doctor Who will be presenting its own unique take on the tale.

You can read about various Disneyesque versions of the saga of Ebenezer Scrooge over at my Decidedly Disney blog.

* You can click on any of the labels below to see some of those previous posts.

Caricature of Charles Dickens by Tobo

You make me smile. Thank you. Wonderful post and recording! :)

Thanks, Wendy, glad you enjoyed it. I love the fact that, thanks to modern technology, one of my Ghosts of Christmas Past can live again!

Ah yes, this has been my favourite Christmas story ever since I was young; I love the story and narrative so much that I never get bored of reading it.

The film/TV adaptations are fine too; although my favourite is probably the TV version when Patrick Stewart played "Scrooge".

Thank you, Brian! That just hit the spot. I've been intending to re-read A Christmas Carol since a recent viewing of the made-for-TV "Eloise at Christmastime", that shows Julie Andrews as Nanny reading snippets of A Christmas Carol in a delightfully spine-tingling manner. Your program actually sent me to the bookcase to get out my copy (which also includes other Christmas stories by Dickens, ones that have been quite overshadowed by Scrooge, who casts a very long shadow indeed).

I also must say that I've been in SibleyRadio withdrawal since the fabulous series The Musical ended. This treat from Christmas Past helped enormously.

Stephen – I was fortunate to see (on two occasions) Patrick Stewart's one-man stage performance of A Christmas Carol which was a masterpiece of theatricality, superbly and perfectly capturing the spirit of Dickens' "ghost story of Christmas".

SCB – Thank you! I didn't actually think anyone would make time to listen to it... :)

Marvellous seasonal post! I just posted a link on the Ray Bradbury message board since - as I'm sure you know - Ray names A CHRISTMAS CAROL as his favourite story.

Thanks, Phil. Yes, I did know of Ray love of the Carol, I was very fortunate in that, some years ago, he wrote an endorsement for the cover of my book on Dickens' book. I'm too modest to repeat it here, but it was very gracious. If the age of F451 were to ever arrive this would be the book I would commit to memory – not too difficult as its about 40% there already! :) I appreciate the link...

I first heard 'Humbug' 17 years ago and became aware, immediately, that I was listening to a fellow fan of the book with a passion for it that was as great as my own.I then did what I've never done before or since. I wrote a fan letter to the programme's presenter and amazingly, got a call back. A friendship developed that I still regard as one of the greatest things I have got out of reading this book. Not a year has gone by that I haven't listened to this programme as part of my (many) Christmas rituals.In addition, if you like this... you should also like 'Fox at the Manger' - another really great piece of work. Brian Sibley (as someone once said) 'God Bless Him'

My dear Boll! What a gent you are! The feelings are mutual: out of that friendship came many things, not least the encouragement to write my book, A Christmas Carol: The Unsung Story in the crafting of which you gave me so much assistance. And, as if that wasn't enough, you have gone on finding new Carols and Carolings to keep my interest - like the holly and ivy of this winter season - ever-green! Thank you!

Roger tried to leave the following comment without success – probably due to the erratic spellings! ;)

I much enjoyed listening to your programme 'Scumbag' on Clyde Duckins and Abanazer Scrunge.

PS "Alastair Sim: you're my favourite!"

PPS Is Christmas Carol a relation of Eskimo Nell? There's a ballad there methinks!

Greatest story which had far reaching effects and is still relevant today,
thought you might like my machinima version of A Christmas Carol
http://www.youtube.com/watch?v=S9SBebs3A5I