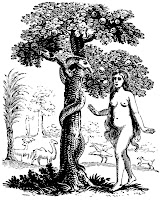 There's an old joke set in the Garden of Eden which goes: God blamed Adam, Adam blamed Eve, Eve blamed the Serpent and the Serpent didn't have a leg to stand on!

Maybe the fact that the snake has been associated since antiquity with the Old Deceiver is one reason why most of us find these reptiles pretty repellent.

Ophidiophobia, or a fear of snakes, is very common and even some intrepid adventurers, such as Indiana Jones, break out in a muck sweat if they happened to come across one.

Some years ago (to be absolutely truthful, way back in the '90s), I collaborated with my friend, the composer David Hewson to create a recording of a disturbing little anecdote by the 19th Century American satirist and short story writer, Ambrose Bierce (famous for his scurrilous lexicon, The Devil's Dictionary) which may give you a few enjoyable creeps and – at the end of the tale (or tail) – possibly even raise a wry smile.

The MAN and the SNAKE

I know David Hewson's work from your 'The Fox at the Manger' (which I listened to again just recently). It's a great dramatisation but the music is just brilliant. I love it !

And The Fox at the Manger is being repeated again this Christmas on BBC Radio 7 on 22 December.

When I was younger when I watched Disney's "Alice in Wonderland", and Alice is growing huge and she's taller than a tree, and the pigeon yells "SERPENT!", and I never knew what it meant - but recently finding out it meant a snake, and reading the Bible story in it made me remember!

Its about time we had an update of 'Humbug' as well although I've already listened to that this year...nothing changes :-)

Steven - Yes, you are right and, although, Disney has been much criticised over the years for his studio's interpretation of Alice in Wonderland, this is an instance where a scene in the film is exactly as described by Lewis Carroll in his book.

Boll – Well, you must be a mind-reader (I'll expect your application to join The Magic Circle by return!) because I have just transferred Humbug! to my new favourite toy, Soundcloud, and will be posting it on the blog on the anniversary of the publication day of A Christmas Carol for the benefit of all those who aren't old enough to have heard it! As my Official Archivist, do you, by any chance, happen to have dates for the first and extended versions of the programme?

Is the Pope a Catholic ?

Naturally I have such information at my fingertips :-)

The original thirty minute version was first broadcast on Radio 4 on 22nd December 1987.
The extended edition was broadcast, also on Radio 4, on Christmas Day 1993.

OK, Mr Archivist, Sir: do you also happen to have the original broadcast dates for any of the following Sibley programmes: ...And Yet Another Partridge in a Pear Tree, The Fox at the Manger and The Nutcracker and the Mouse King?

Well good sir, I only know them if I've heard them ! No legal deposit copies were placed on file for any of those recordings except 'The Fox at the Manger' which was first broadcast on Boxing Day - the day after Michael Gough's 'Christmas Carol' in 1990.

Thank you! I hope you are across this years scroogings and (since I will be away) that, if you record anything on radio, you might pass on a copy to that burgeoning Christmas Carol collection that is (as yet) waiting for a beneficiary under my Will!! ;)

Specifically I was thinking of Marley Was Dead...

Charles Dickens's A Christmas Carol has been widely adapted and dramatised but never quite like this before.

An all-star cast gathers to bring the timeless allegory to life in Marley Was Dead, a piece of spoof radio.

It is Christmas Eve and listeners are about to hear a starry cast performance of A Christmas Carol from St Martin in the Fields, introduced by Jonathan Dimbleby. At least, they think they are...

Jonathan Dimbleby, speaking from the balcony, introduces the production and the stellar cast: Sir Ian McKellen as Scrooge; Sir Patrick Stewart as the Narrator; David Tennant as Bob Cratchit and so forth. Sir Simon Rattle conducts.

But a few seconds into the play itself – just after listeners hear the famous opening lines "Marley was dead", things take an unexpected turn for the worse. What follows next is screwball comedy in the finest tradition.

Producer/Sasha Yevtushenko for the BBC

Already been through the RT with a fine tooth comb sir and noted said items ! Will be looking to update my 1990 Fox and CC broadcasts - both of which are on this year. Will certainly forward you a copy of the Christmas Eve special although, I suspect, it will be the silliest thing ever...
Am upto date with Scrooge watching at present but will be deviating into viewing a version of Season's Greetings (a personal favourite) with a certain somebody as Harvey !