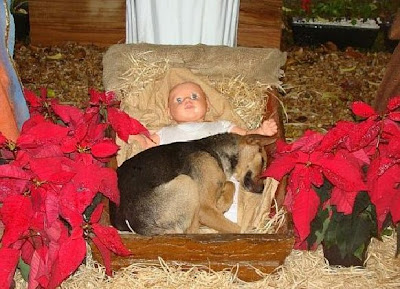 In case you ever wondered: the phrase 'dog in the manger' derives from a proverb against selfishness and envy by the 2nd Century Greek writer, Lucian who observed, in Remarks addressed to an Illiterate Book-fancier:

"There was a dog lying in a manger who did not eat the grain but who nevertheless prevented the horse from being able to eat anything either." 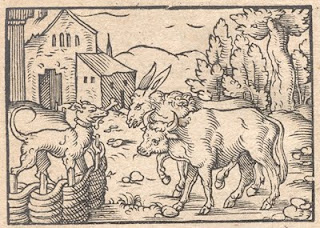 Though it be not the hound's habit
To eat chaff, yet will he warn off
An ox that commeth to the barn
Thereof to take up any food.

And, in keeping with the photo at the top of this post, it should be noted that in the apocryphal Gospel of Thomas, Jesus is credited with using this saying in his teachings:

"Jesus said, 'Woe to the Pharisees, for they are like a dog sleeping in the manger of oxen, for neither does he eat nor does he let the oxen eat.'" 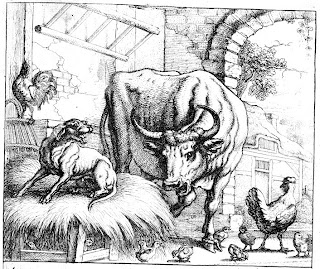 The illustration above is by Francis Barlow from Barlow's Aesop (1687) by which time the Greek fabulist had been pretty much universally (if inaccurately) credited with the proverb...

Incidentally, a few years ago, we came across a witty engraving in Venice featuring "a doge in the manger"!
Posted by Brian Sibley at 10:57

Thank you Brian, I didn't know that aphorism of the Apocryphal Gospel of Thomas. Always learning with you.

I must admit, I prefer pigs in blankets.

Eudora – Always a pleasure because I'm learning at the same time!

Good Dog – Trust you'll get some with your Christmas lunch! :)