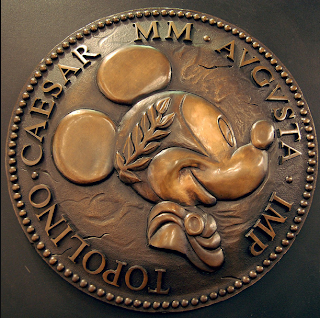 It is sometimes said that the Caesars of Ancient Rome when riding in a triumphal procession were attended by a slave who stood behind the emperor and repeatedly whispered in the imperial ear: "Respice te, hominem te memento" or "Look behind you, remember you are only a man".

True or myth, I can think of several contemporary international politicians who could benefit from adopting this novel idea.

For the rest us non-emperors, however, Life often provides a similar service, as I discovered again this week. I will explain: I have been enjoying (in a, frankly, rather immodest way) the reviews of my audio-commentary on the recent Blu-ray and DVD releases of Walt Disney’s Fantasia/Fantasia 2000.

Fantasia includes three audio commentaries. The first, helmed by eloquent Disney historian Brian Sibley, offers a veritable treasure trove of information on the development, design, production and legacy of the film. Sibley not only details and dissects each animated segment and its creation, he weaves a compelling history of Disney’s grand design. 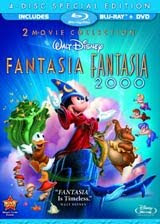 In the view of DVDVerdict...

There's a total of five commentaries provided for the two films; three of which belong to Fantasia. The first is a very fine track with Disney historian Brian Sibley, who provides a thorough overview of the film's creation.

Brian Sibley gives a lot of detailed information and background about the film. I’ve noticed historians seem to be the best commentaries due to the fact that they are fans of the film and will tell the trivia that other fans will enjoy as well.

In the opinion of SoundtrackNet...

Supplements for this combo pack of Fantasia and Fantasia 2000 are a mix of old and new. Starting with Fantasia, we first have three audio commentaries. The first one is a newly recorded on by Disney Historian Brian Sibley, and it's amazingly informative and well presented.

If ToonZone (link now lost) are to be believed…

The audio commentaries for both movies are quite nice, although I have to give the nod to the Fantasia commentary by Brian Sibley... Sibley is a treasure trove of knowledge that discusses the individuals behind every animated segment, at times even getting specific enough to explain exactly who drew a particular character.

The techniques behind many visual effects are discussed as well, which really helps hammer home what a thorough and painstaking effort production must have been. For animation buffs and serious fans, the extra is a must.

And, after what I thought was going to be a shaky start, DVDtalk gave the following ecstatic response…

Three Audio Commentaries can be played with the film, one that's brand new with Brian Diblet [Who??] and two others... but this new Sibley [That’s better!] track is astonishingly comprehensive.

His enthusiasm shows with each passing second of the track, revealing symbolism, artistic choices, and ways that Fantasia has inspired other films -- such as Ray Harryhausen's Clash of the Titans work, and the Chernabog's stature on "giant" films -- with its design.

He never shies away from discussing how the artwork was achieved, getting technical yet accessible with the techniques used (charcoals), while also revealing the depth of the mythology behind each of the visual renderings. And yeah, he even discusses the censorship during the Pastoral Symphony, both of Sunflower and of the nude centaurettes. A must-listen commentary, if there ever was one.

But, then came that whisper in the ear that cuts one down to size – courtesy, on this occasion, of Suite101…

Historian Brian Sibley does the audio commentary for the original film. Although he clearly knows his stuff, his tone is dry and pedantic which doesn't help.

Mercifully, TheDigitalDorm’s reviewer put the smile back on my face with the following appraisal...

Audio Commentary with Disney Historian Brian Sibley - Dude's got an absolutely perfect British voice. He also pronounces the film "Fan-Tayz-eee-uh" which is awesome. Really informative and easy track to listen to.

Awesome dude? What can I say? 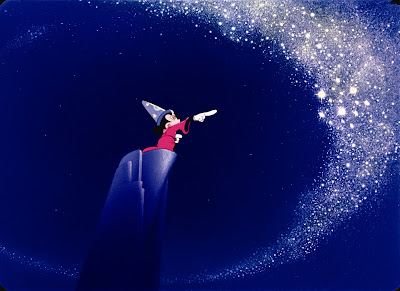 Photo of Mickey Mouse as Caesar Augustus in The Disney Store, Rome, from Trong Enger's Photostream
Posted by Brian Sibley at 00:01

Perhaps you should have these reviews easily to hand for the next time you have a crisis of confidence!!

Except the penultimate one, obviously! :)

unfortunately I am not much of a Disney fan, so I probably won't hear your commentary. But my first encounter with your work was on the LOTR "appendices" where you showed a passion that sounds similar to these glowing reviews. Happy for ya dude!

Well done, Brian! You're not supposed to blow your own trumpet, but you are allowed to listen to others'!

Good job you worked hard at that British voice.

This is on my Christmas list. The Blu-ray, not the British voice. Though I wouldn't mind one of those too.

Brilliant! And David's right (of course).

There's a good mantra for moments of self-doubt in the last one: "I am an awesome dude with a perfect British voice." Repeat 5 times a day as required.

Way to go, dude (or something!). How else should one pronounce Fantasia - unless you're a Colonial chappie?
Roger

SPORRI: an oatmeal dish kept hot in a bag in front of the kilt to warm the cockles of a Scotsman.

YOU ARE UNDOUBTEDLY THE MAIN DUDE, BRIAN!!!

The Suite 101 reviewer was obviously talking out of his posterior.

Jason – I am available for voice lessons – if the fee is right! ;)

Roger – I think the 'correct' American pronunciation is 'Fan-taysher'. But then they also say 'Sto-cow-ski' instead of 'Sto-koff-ski', which reminds me of the story about the conductor getting cross with the Disney studio staff mispronouncing his name during a meeting and, after a quick look round the room, saying: "I don't see any cows here!"

Sharon – Maybe Suite 101 is a bit like Room 101: a depository for things not much liked!

So much more awesome than that other guy, Brian Diblet!

The review that strikes a chord with me is the one that says that, as a fan, you always know what other fans want to hear about. I think that first stood out for me when I heard 'Humbug' seventeen years ago. All the facts in the world don't mean anything without passion for the subject and the result of that is that people are suddenly aware that the presenter likes exactly what they like and is enjoying it with them. That is infinitely satisfying and makes the whole thing worthwhile and so much better than the cynical talking heads we so often have to endure nowadays.

Hear, hear on "Boll Weavil"'s comments on fan as commentator. Works especially well with someone, such as our host, who can approach it with knowledge and appreciation.

Congratulations Brian, who, as most of us seem to have anointed him, the DCD with the PBV (Disney Commentary Dude with the Perfect British Voice)!