MAY THE MOUSE BE WITH YOU 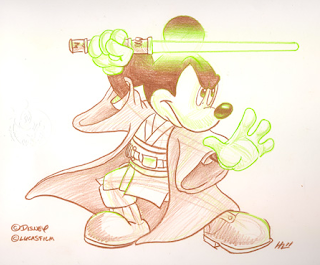 The prophetic talents displayed by this blog-writer sometimes amaze even me! Scarcely three months ago we ran a caption competition for a picture of George Lucas crossing light-sabres with Mickey Mouse, we discover the outcome of that battle of wills...

According The Hollywood Reporter we can expect the release of a new Star Wars film every two to three years. In a statement, George Lucas said:


“For the past 35 years, one of my greatest pleasures has been to see Star Wars passed from one generation to the next. It’s now time for me to pass Star Wars on to a new generation of filmmakers. I’ve always believed that Star Wars could live beyond me, and I thought it was important to set up the transition during my lifetime. I’m confident that with Lucasfilm under the leadership of Kathleen Kennedy, and having a new home within the Disney organization, Star Wars will certainly live on and flourish for many generations to come. Disney’s reach and experience give Lucasfilm the opportunity to blaze new trails in film, television, interactive media, theme parks, live entertainment and consumer products.”

Here's what Disney Chairman and CEO, Bob Iger, and George Lucas had to say before signing their intergalactic deal...

Scarily powerful? Only time will tell... 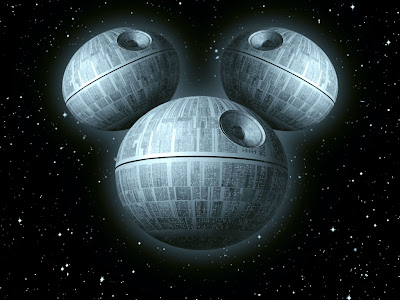 I think they said they would make a new Star Wars film every three years only until episodes 7,8 & 9 were done - those were the originals that Lucas said he would make but then backtracked and said he never intended to when the middle three flopped (comparatively). I hope they do this, if only for artistic integrity. Now the Narnian Chronicles have ended in total disappointment (and whether that disappointment began before or after the Dawn Treader is a matter of opinion) there is little else to look forward to on the distant horizon. I suspect though, if they make money, they may, like the Bond films, be dragged ever onwards. I'm open-minded but then I thought the Phantom Meance was a nice bit of entertainment so who am I to judge :-)