The Greeks, as they say, have a word for it; in proof of which, Irene Glinatsi occasionally introduces a Greek phrase or saying into the conversation such as, “When the water gets into the stream,” meaning when things settle down into their natural course; or, “It’s only the mountains that never meet,” which is a Kalymnian variation on our more prosaic expression, “It’s a small world…” 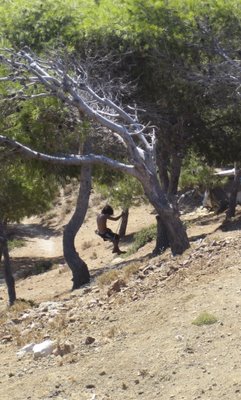 When Irene’s eleven-year-old son, Themelis, is not running wild, he is also clearly a born philosopher. As our friend, Gill, was preparing to leave Emporios the other week after her seventh or eighth visit, the youngest Glinatsi announced that, “The puzzle that is Artistico will now be missing an important piece and will not be complete again until Gill returns.”

And, the other day, when I was explaining to Themelis’ father that something that I had said was “a joke”, the lad sagaciously observed: “All life is a joke! We come; we make our little jokes; and then - poof! - Goodbye! See you in the next place!”
Posted by Brian Sibley at 06:26

I'm sure such a prognosis must have cheered you up no end !