HOW YOU GONNA KEEP 'EM DOWN ON THE FARM? 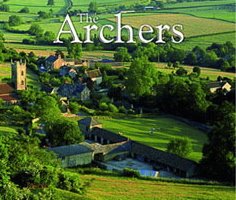 My friend at polkadots & moonbeams recently got very excited on her blog about the news that Sophie Barlow was returning to The Archers which, for the benefit of out-of-towners and aliens from the Planet Zog is the BBC's legendary, long-running radio soap-opera.

Reading p&m’s posting and the relevant BBC web-page with it’s detailed back-history, made me realise how life in the village of Ambridge has moved on since my parents used to tune in (then at 6.45 pm) as a nightly accompaniment to supper.

In those days - and we listened, religiously, for best part of a decade-and-a-half - it was called “an everyday story of country folk”, invariably included useful agricultural information supplied by the Min of Ag and Fish and featured characters - that today’s younger listeners won’t even have heard of - such as Dan and Doris Archer, Ned Larkin, Tom Forrest, Walter Gabriel and Mrs Perkins or, as Walter always called her, “Mrs P”...

Browsing the BBC’s Archers pages (apart from the puzzling banner which shows a never-ending wheat field that looks as if it rightly belongs in the American mid-west) stirred all kind of happy memories.

In particular the downloadable maps of Ambridge and Borsetshire (and especially the village panorama, below) reminded me of all those place-names that were part of my youthful listening: Lakey Hill, Glebe Cottage, Hollowtree Farm, Grey Gables and, of course, ‘The Bull’… 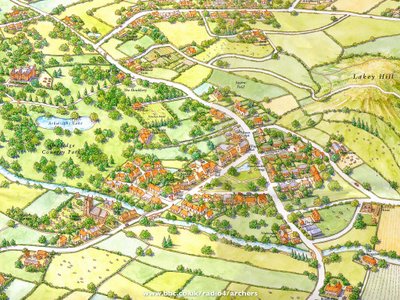 However, returning to the return of Sophie, I was most perplexed to read the following:

“Sophie is played by the original actor, Moir Leslie, who was heard more recently in The Archers as Rev Janet Fisher.”

Sophie and Janet - for the uninitiated, Sophie is on the left!
My question to the BBC is: should you really be telling us this kind of thing? When I was a listener, the Corporation occasionally published a faux edition of newspaper mentioned in the series, The Borchester Echo, with all the news from Ambridge and photographs - including, if I remember rightly, Phil and Jill Archer outside the village church on their wedding day: posed by the actors, but captioned as if the characters were real people…

Now, correct me if I’m wrong, but wasn’t the ‘Rev Janet Fisher’ was a bit of problem in Ambridge? Especially when she became attracted to GP Tim Hathaway following his wife, Siobhan’s adultery…

Might it not, therefore, be best if listeners didn’t know that the actress who played her reverend-self is now back as Sophie? Unless, of course, she is actually the Rev Janet Fisher disguised as Sophie!

If I were into spoiling the magic of radio, I might mention that I’ve worked with my fair share of Archers characters over the years, among them: Marjorie Antrobus and Lynda Snell (shockingly one and the same), Bri Brody, Al Clancy, Alan Fraser, Bert Fry (both Mark II), Joe Grundy (Marks II & III), Shula Hebden, PC Colin Drury and others.

Indeed, my debut radio programme featured Norman Shelley who was the first of two actors to play Colonel Danby and who, years before, was radio’s voice of Winnie-the-Pooh, Dr Watson and (strictly for the Oldies) Captain Brass in Toytown!

Archers aficionados (or, at least, those with any historical knowledge of the village) might also care to know that I encountered several leading locals in Middle-earth when we made the BBC radio dramatization of The Lord of the Rings.

Jack May (Nelson Gabriel and other roles) was King Théoden of Rohan, Hugh Dickson (Guy Pemberton) was Elrond and Saruman - the evil, corrupted wizard - was portrayed by Peter Howell who is still on a retainer contract to play (rather surprisingly in view of his Middle-earth persona) the Right Reverend Cyril Hood, Bishop of Felpersham, whenever a purple cassock is called for - as, indeed, it was when the aforementioned Reverend Janet Fisher was in need of a bit of counseling.

I sincerely hope, with Sophie - or Janet - back on the scene, that Bishop Cyril is still standing (or kneeling) by in case of any new emergencies on Ambridge moral front…

In point of fact, it just occurs to me that the scriptwriters could probably come up with a really cool storyline if the Bishop turned out to be a bit Saruman-like and started a Satanic cult in which a coven Borsetshire women (possibly including Janet/Sophie) indulged in various naked ritules (think The Wickerman) held at the full moon in one of those endless fields of wheat...

Or is that too exciting for The Archers?

While you're thinking that over, the dedicated, hard-line Archers fanatics might care to amuse themselves with these Listeners' Parodies written by other people with too much time on their hands
Posted by Brian Sibley at 00:03

I wonder how many people that read your site think that radio is a far better medium for drama than TV and film ? It may be an odd thing to suggest but of late, I've become increasingly aware that films of which there is a radio equivalent are somehow spoiled for me because a superior version has already been made.Most recently I've watched Johnny Depp in 'The Libertine' - a great movie but Bill Nighy is unbeatable in the radio adaptation. Last year we were supposed to get excited over tv's 'Bleak House'. It WAS good but unfortunately, I already have the definative version on cassette... and why does nobody make films like the dramatisation of Samuel Pepys' diaries that were on a few years ago. The Archers V Eastenders....discuss.