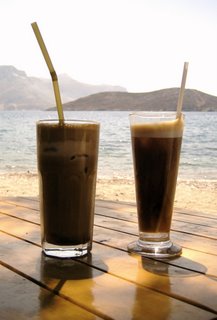 Why is it that I only ever drink frappes when I’m on holiday?

It is, I think, part of a phenomenon that, for me at least, began many years ago…

When I was five or six years old, we went on holiday to stay my aunt and uncle who lived in Somerset. It was there that I discovered the delights of Weetabix, which I ate in great quantities with much relish every morning.

My mother, who had never succeeded in getting me to eat cereals, was thrilled! At last! A breakfast food that Brian would eat -- and actually liked!

Back in London, she immediately invested in the biggest possible jumbo-sized box of Weetabix available and - as you will have guessed - I never touched another one!

That was my first taste - literally - of holiday treats: food and drink that you enjoy immeasurably while away somewhere but which , once you get back home, you never indulge in again!

How many people will carry home bottles of ouzo from here, never to touch a drop until their next holiday in Greece? How many others, like us, have a bottle of Lemoncello in the cupboard that was religiously brought back from Italy before we realised that it is intolerably sticky and sweet if drunk anywhere but in the country of its manufacture - and is, actually, pretty disgusting even in Italia?

Anyway, this year’s Kalymnian treat - in addition to the frappes - has been a strawberry-and-white chocolate Magnum-type ice cream (sporting the tell-tale Wall’s logo) that is incredibly yummy but which has yet to find its way to British shores. 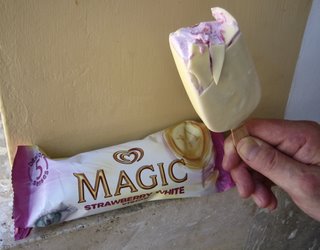 If and when it does I will, of course, be sorely tempted to buy one; but, in my heart of hearts, I already know that it could not possibly taste anywhere near as good as it does here and will be as disappointing as London Weetabix was compared with the Somerset version!
Posted by Brian Sibley at 06:31

I can only say that with the weather we are experiencing here, you would be better off getting into Horlicks and bringing a large jar back with you !