The recent CAPTION COMPETITION resulted in an excellent crop of entries of an exceptionally high standard.

The image, you will recall, was of a pair of workmen cleaning one of the icthyosaurs in the dinosaur court in the grounds of the Crystal Palace... 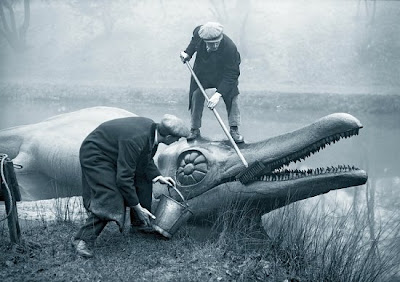 Here, then, are your offerings, beginning with the runners-up...

"Quick, knock 'em teeth in here before he closes 'is mouf . . . Don't worry they'll never know they're not hen's teeth."

Ichthyosaur: "The teeth, I understand, but the eye bath?"

"If my eyes were not daisies I could see what this guys are doing with my teeth..."

"This guy must have cost the tooth fairy a fortune!"

Man with bucket: "Didn't they have floss in his day?"

"I don't mind brushing his teeth but there's no way I'm flossing..."

"Rinse and spit. If you don't want the bucket mate, don't go NHS."

"Just rinse and spit into the sink please. You will be numb for a few hours on your left side but after that OK. We will see you again for a check up in six months."

"OK, that's the teeth done. Now we just have to get you these Calvin Klein's on or Mr Sibley won't use your photo."

"Pop down the chemists would you Bert and get me a hundredweight of Dr White's Super Whitening Toothpaste, this stuff ain't doing the trick."

"You oughta stop giving him those humbugs y'know - they're really mucking up this geezer's gums!"

"I told him and told him that bubble gum would get stuck in his teeth!"

Cleaning bloke 1: "You missed a bit!"

Said by all three, not listening to either of the others: "Of course back in my day..."

"With this credit crunch I just hope it doesn't ruin this brush as we're not getting another one!"

And so to the
WINNERS!
Joint-Third Place - Boll Weavil

"Do you know who I had in the back of my enclosure yesterday, boys? That Dickie Attenborough... He's a nice bloke."

Joint-Third Place - LisaH
Icthyosaurus: "How thoughtful of them to bring the bucket - it will be handy for spitting the bones into!"

"You think if we clean it up nice, no-one will notice we swapped its eye for a Jammie Dodger?"

First Place - Bitter Animator
"You couldn't just go for a bloody goldfish, could you? Not good enough for you! No, you had to have an icthyosaurus! You had to be special! Well, now everybody on the bloody street has one, even Mrs. Tiddlepot. Ate 'er bloomin' cat, didn't it? Broke her little heart that did. Bet you don't feel so special now, eh? Eh?!"


CONGRATULATIONS (obviously) to the winners, but THANKS to everyone who entered for giving us such a plethora of entertaining captions: I'd certainly no idea that prehistoric creatures could quite so amusing!
Posted by Brian Sibley at 00:01

Well done Brian - a bit of fun is just what we need in these uncertain times - and there's lots of snow outside. Some great captions - think I'll add my 'joint third' to my CV - though I felt that Boll's Calvin Kleins caption deserved a placing.

I'm sorry, LISAH, but gratuitous references to undergarments does not (automatically) guarantee a placement in caption competition results! Mr Weavil is, of course, well aware of that fact, but enjoys trying to buck the system... ;-)

Gratuitous references may not do but gratuitous photographs have always worked ! As I was actually wearing a pair of Calvin Klein's during the writing of the caption, I feel I should have gained a higher placing if only for trying to influence the judges.
SARDESSE : The feeling that the judges were overly critical and one's medal or position on the podium was a little further down the order than it might have been.

Too much information, BW!!

Wow, thank you! I'm honoured and against such stiff competition too - I do find myself wishing I had spotted the jammie dodger. That was gold.

Thank you very much, Mr. Sibley. I shall be bragging about this one for quite some time.