HAVE A GOOD DAY! 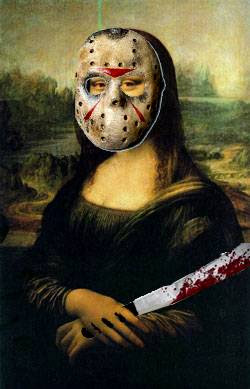 Well at least you've got a Blog ready for a month' time when it will again be ... Friday 13th.

I tend not to worry too much about it because so many other days in the year turn out to be unlucky.

Coestyfa: Persuading yourself that a situation is unlucky and somehow contriving to prove it to be the case.

ANOTHER one? And so soon? The thing is, will I be able to find a picture of the Laughing Cavalier wearing a Jason mask? Probably not...

I always thought that she was dangerous, that look...

In Spain the fatal day could be a thursday 13th

How interesting! I wonder why...? Could it be because the Last Supper was held on a Thursday night and those present (including the betrayer, Judas) numbered 13?

Oh my God, sorry, my poor and dreadful english... in Spain the fatal day is tuesday 13th...., Tuesday in spanish is "martes", the spanish name for the roman god Mars is "Marte", the god of the war...

But! my dear Brian, do you know that some specialists think that the last Supper was held on a Tuesday?.... perhaps, after all, you give us the right reason.

tend to agree with LisahH,not tooo superstitious but today, a hearse I was following in my car, suddenly decided to reverse into a garage space. For a moment I thought they might be giving me a lift to where I'm not ready to go. That careless driver,my face was as white as the long hair under his black top hat...touch wood I won't cross his path again for a good long while whatever day it is!
Gication:feeling of impending doombeaki

JEN - Glad the hearse wasn't for you... Reminds me of the opening and closing of the film Dead of Night... Still, you know what they say about undertakers: "They're the last to let you down!"