AND THE WINNER IS...

So, Slumdog Millionaire cleaned up at the BAFTAS, apart from a posthumous award to Heath Ledger for his joking around in The Dark Knight and (following on from recent discussions here about animated films) a predictible honouring of WALL.E prior, presumably, to a re-run at the Oscars...

Meanwhile, the Sibley blog has been awarded a Premio Dardos Award by Irascible Ian. "A What?" I hear you asking, well, here's the citation... 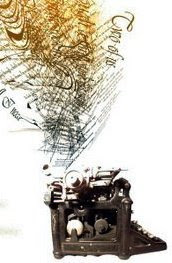 The Dardos Award is given for recognition of cultural, ethical, literary, and personal values transmitted in the form of creative and original writing.

These stamps were created with the intention of promoting fraternization between bloggers, a way of showing affection and gratitude for work that adds value to the Web.

Premio Dardos is, apparently, Italian for Prize Darts (hence the use of the, presumably, oddly-translated word 'stamps') but whatever it is and however it started, I am - obviously - overwhelmed!

In fact, I cannot adequately express how I feel at this moment - but suffice it to say that I'm sufficiently choked up that if I were allowed anywhere near a microphone I'd make Gwyneth and Kate look like rank amateurs...

Actually, I'm very flattered to have been tapped by Ian who is not only an excellent blogger, but a discerning follower of blogs...

Premio Dardos seems to be a kind of blog tag since Google lists hundreds of recipients and one of the obligations of winning is to pass it on to five other blogs, so here goes...

Michael Sporn's Animation Splog is an endlessly diverting blog (or 'splog'!) devoted to animation, illustration and film by a man who is both an animator and a tireless enthusiast with a vast knowledge of the medium and the ability to make it exciting and inspiring for others. 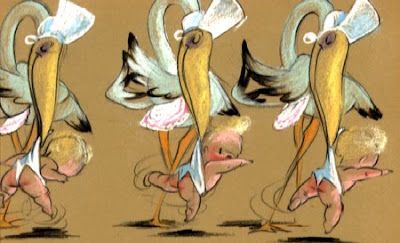 And make sure you also check out Michael's Films.

Petrona is (thanks to the indefatigable Maxine) definitely one of the best reader's and writer's sites, full of news and views on books as well as challenging ideas and provocative thoughts on so many diverse topics that there's always something of interest. 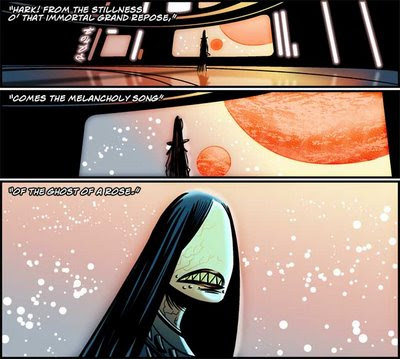 He is also a regular contributor to the on-going comic adventure story published on another fun blogsite, HUZZAH!! 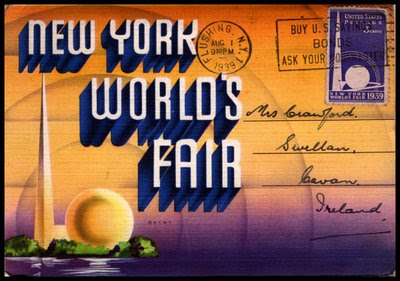 ...and just about everything and anything you can think of that might have found it's way into a couple of hundred years of pop culture.

Abecedarian is an eclectic potpourri of words, games, puzzles, illusions and allusions created by Craig Conley (below) acclaimed as "America’s most creative and diligent scholar of letters, words and punctuation". 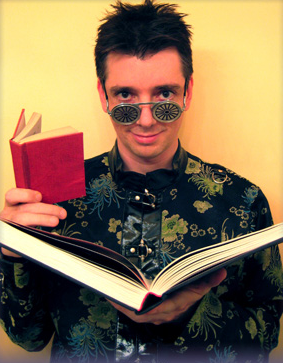 Enjoy your awards, Premio Dardos winners (not forgetting to pass them on to five other recipients) and enjoy their work the rest of you...
Posted by Brian Sibley at 00:55

Oh good grief! More blogs & sites to visit during my early morning routine! I'm never going to get any work done or learn my lines!
Somehow I don't think my director will be too pleased if I blame you Brian for not knowing my lines!
isrecan: a routine of internet surfing gone through in the morning with a cup of coffee in one hand

Sorry about the diversions and digressions! What, by the way, are you learning lines for now, SUZANNE?

Congrats, Brian - hopefully we'll see you with a Blogging BAFTA one of these days.

I'm with Suzanne re the additional distractions, but all the sites you've given awards to look hard to ignore.

alate: Description of the start to the day, incurred after visiting the Sibley Blogsite and transported to various other magical sites.

It's a completely mad comedy about 2 brothers-in-law involuntarily swapping places! Plenty of twists & turns & a great surprise finale! All in French you understand!

Congratulations, but you must put the icon of this award a few this on your blog.

The blogosphere is amazing, many people with so much creativity and many thing to tell...

My goodness, you embarrass me with your comments. I can understand you're winning the prize but moi? Many thanks, I'm honored. I feel like a slumlord millionaire at the BAFTAs.

SUZANNE - Break a leg... Every farce should have a character with a broken leg! ;-)

MICHAEL - You are very welcome - and it's an honour thoroughly deserved!

That Strange Planet Stories site is fantastic. I had never seen that one before and I'm a fan of old sci-fi comics (I was a 2000AD and Starblazer junkie as a child) so I'm looking forward to having a good look this evening.

Thank you so much for your kind words, Brian - at a time when I was getting rather dispirited with all this blogging lark, you've really cheered me up! Thanks so much. (Your blog, by the way, is one of my regular daily highlights, a very sunny spot in the blog universe.)

Thank you! Very kind of you, sir. Much appreciated, I'm really very honored. Now I have the Charon-esque task of nominating a further five blogs!

Also, thank you for mentioning HUZZAH!! and providing a link to that. The HUZZAH!! squad were very pleased. Thank you once again on their behalf. And stay tuned... there's another HUZZAH!! game starting in March - a different beast entirely... more on that later.

MAXINE (aka Petrona) and I. N. J. Culbard - glad to have been the source of encouragement! Blogging can be a lonely business and it's good, now and again, to know that others really are reading and valuing your blogs...

I'm very flattered to be a recipient of your nomination. It's very pleasing to have such a distinguished reader! Finding five nominees of my own was a fascinating business. Thanks again!

Maybe i read this post wrong, you won at darts and have been fraternizing with bloggers ?
Congratulations anyway great reading ;-)

MICK - Maybe I should take up darts - I've certainly got the build for it! Thanks for popping by, I enjoyed finding your blog...