On Oscar eve (or 'day', depending which side of the Atlantic you live on) I went with Irascian to a screening of this year's Academy Award nominated animated shorts...

As always watching a bunch of disparate animations is a curiously disorientating business requiring the viewer to instantly adapt - chameleon-like - to the different looks and tones of the films.

The top favourite among the five finalists is undoubtedly... 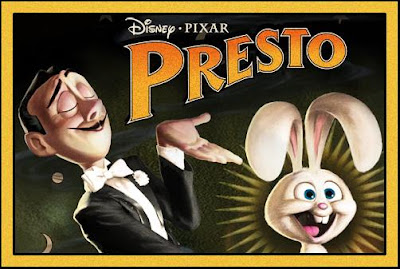 Presto was the supporting short on the release of WALL.E (also in the running for an Oscar in the feature animation category) and is the story of a Magician, a Rabbit and two magic hats... 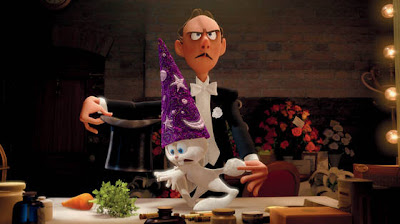 True, it's a one-joke story, but it's delivered at a furious, break-neck speed and crammed with zany, non-stop, Loony Tunes-type gags that come thick and fast, mount to an untoppable climax whilst knowing precisely when to stop... 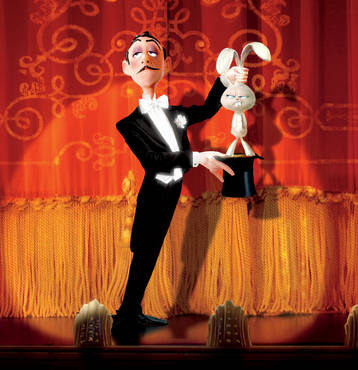 Presto is, unquestionably, a mini-masterpiece. Whether it can pull the Oscar out of the hat remains to be seen...

'This Way Up' is a wacky saga by British animators Smith & Foulkes about two undertakers whose hearse is written off and have to endure all kinds of agonies - in fact they go, literally, through hell - in order to deliver a body to its final resting place... 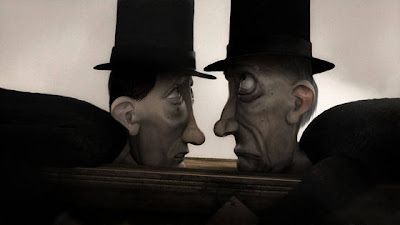 Whilst not consistently satisfying, 'This Way Up', has many moments of deliciously black humour. Equally amusing but far more subtle, is Lavatory - Lovestory, a touching tale of romantic longing from veteran Russian animator Konstantin Bronzit. 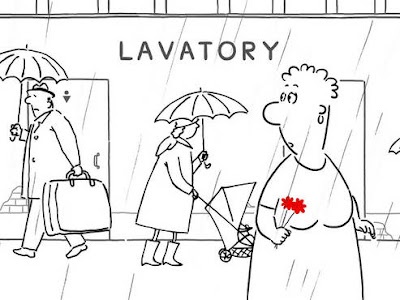 There are more emotional reflections in Kunio Katō's Japanese short with a French title, La Maison en Petits Cubes, which is about an old man living in the 'house of little boxes' each of which have been built on top of an older one as the surrounding water-level rises and past homes sink beneath the waves. 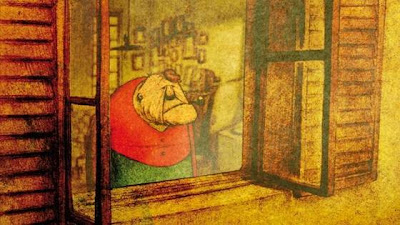 When he drops his beloved pipe, he goes diving to recover it and, on the way, many long-forgotten memories. If Presto misses out on the Oscar (and Pixar haven't always won in the shorts category) then Katō's film with its affecting message and arty direction is tipped to be the alternative nomination which could snaffle the Academicians' votes.

Finally, there's Oktapodi, a mere three-minutes long, this brilliant, digitally-animated short from France that recounts the attempts of an octopus to save his soul-mate from ending up as a dish on Greek menu. 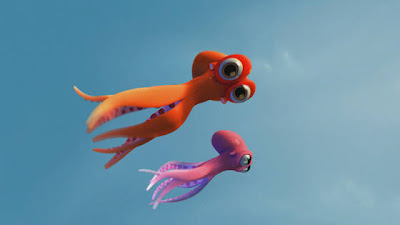 For its economy of story-telling and sheer dynamism this might just give Pixar a run for its money.

To see why, go and view the film on the Oktapodi website. 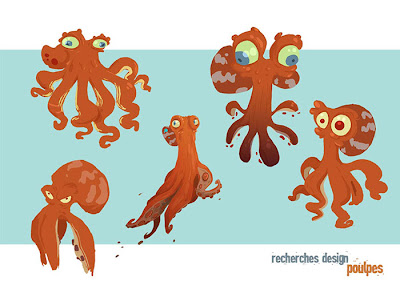 And if you're going to be sitting up to watch the Oscar ceremony itself - enjoy!

Personally, I'll wait for the morning to discover this year's winners...

In case you miss it in the midst of the Slumdog Millionaire euphoria, the Oscar for Best Animated Short went to Kunio Katō's La Maison en Petits Cubes. So, Presto didn't make it; bu, as predicted, WALL.E took the Award for Best Animated Feature, possibly prejudicing Pixar's chances of picking up two Oscars in the animation category. An interesting result: I'm not sure the best film won, but devotees of 'old style' (as opposed to digital) animation will be pleased...

The film is - for the moment at least - being screened on YouTube, but I won't embed it here as it may have been illegally uploaded. Two other nominees (Presto and Lavatory - Lovestory) have recently been removed from YouTube, following complaints from the film companies.

I wish it was as easy to get YouTube to remove the 13 hours of my radio dramatisation of The Lord of the Rings!!
Posted by Brian Sibley at 17:07

There are some really strong contenders here. Presto and Oktopodi, I saw ages ago, and think they are both brilliant. I think Pixar did a great job of animating in a style that was somewhat unusual for them.

The only other I have seen is This Way Up. While I think there are some great moments in it (the woman in the tree being my favourite), I think it's a much weaker film as a whole.

While I haven't seen the others, my hope is that Presto wins as I loved it so much. I also want Wall-E to win best animated film. You know, I always say I couldn't care less about the Oscars. I guess I could!!

Many Thanks!!I'll check this out.This kind of shorts look very interesting in story,design and animation and many times had lack of attention.

I thought Presto would have bagged it. As much as I love the Pixar features (although saying that I never warmed to Cars and it’s the one film not on the shelf here), I think the shorts are simply genius, whether it’s feature related, like Jack-Jack Attack, or simply exists on its own terms like For the Birds and Boundin’. The other great thing about Presto was it spent the whole time channelling the great Tex Avery or the early Tom and Jerry cartoons. To make my grin even wider all it needed was a “produced by Fred Quimby” card to come up in the credits.

After that, the second best was Oktapodi, which was simply perfection, especially since it could have easily contimued for another couple of minutes but didn’t. It quit while it was ahead, which is something a lot of shorts fail to do. I’ll give all styles of animation a go but because I was brought up on Disney and the MGM shorts, probably even before being introduced to the Looney Tunes shorts coming out of Termite Terrace, I always associate animation with something fun that will bring a smile to my face.

This means that no matter how technically brilliant work by the likes of the Brothers Quay is, I’ll stop watching after a couple of minutes. I suppose the same is true for all the great animation from the National Film Board of Canada. Give me The Cat Came Back or The Big Snit over the more groundbreaking, experimental work by Norman McLaren any day.

It may be heresy to say something like that but there has to be a difference between a short film and a technical exercise. I always said if there isn’t some semblance of a plot after twenty seconds then they should slap on a packshot and draw it to a close. It reminds me of a UK short from the early 1990s that featured a couple dancing that just went on and on and on for ages (or at least seemed like that) and by the end added nothing more to what we saw in the first ten seconds.

I liked This Way Up from Adam Foulkes and Alan Smith, even if the underworld sequence seemed to jar. La Maison Ens Petits Cubes was interesting but too “European” (if that makes sense) and typically just the sort of thing that would be feted at Annecy. But I have to admit there were times when I was thinking, “Oh, get on with it!”, even if that labels me as a complete Philistine.

And... they forgot the one big trick when it comes to “boiling” animation. When a character is motionless, still have a short cycle of drawings so that the texture rendering still shimmers, otherwise the sudden freeze in movement really stands out.

ANDY - Well, half your wish came true! Though, personally I was rooting for Bolt...

GOOD DOG - You're right on all counts! Though I'm maybe a tad more tolerant than you of 'experimental' animation it still has to 'say' something for me: tell a story or evoke an emotion, otherwise, it's just doing it for the sake of doing it...

Presto and Oktapodi were pretty near perfect to my mind and - in both cases - the animal and human characters seemed to inhabit the same universe which is not always the case with digital (including Pixar) animation.

And you're right in saying that the underworld trip in 'This Way Up' was a BIG mistake - so big that the film actually stopped being funny.

Yes, La Maison en Petits Cubes was way too ponderous and Irascian and I both commented on those dull still-frame moments that were a real failing and made an overlong film feel even longer...

Also, I simply didn't 'like' the old man and, therefore, found it hard to empathise with his lost happiness...

Mind you, in complaining about the slowness of La Maison, I have to say it wasn't anywhere near as ploddingly, interminably dull as the 'Highly Commended' Varmints which bored on for almost half-an-hour and finally sent both of us into a stupefied doze...

If you haven't seen it, try to get sight of Lavatory Lovestory. Of course, it never had a hope of winning because it looked too simple, but it had charm, poignancy and a delightfully naughty sense of humour...

You’re absolutely spot on saying that if the work doesn’t tell a story or evoke an emotion then it doesn’t add anything.

I’ll look out for Lavatory Lovestory. Last night I rewatched a couple of Michael Dudok de Wit’s award-winning shorts: The Monk and the Fish and Father and Daughter. Dok’s work is just genius and I’d watch the latter over La Maison en Petits Cubes any hour of the day.

I once spent ages editing a commercial in line-test form with Dick Purdum. We went back and forth over the scenes, dropping frames here, adding a couple there. It reached the point where, I’m afraid to say, I was thinking enough already. We had been over this again and again and again. Then Dick took out just one frame from one scene, I think it was, and when we ran the sequence and it was... better than perfect.

GOOD DOG - Yes, Michael Dudok de Wit's animation is superb: simple yet powerful. In Father and Daughter his animation of the daughter at different ages is wonderful (I love the old lady, towards the end, trying to make the bike stand up) and his depiction of the seasons is - bearing in mind the limited palette used - amazingly evocative.

For those who don't know these films, you'll find them here: Father and Daughter, and The Monk and the Fish. I also like Tom Sweep.

Your mentioning Dick Purdum brings back many memories of the days of my youth when I used to visit Dick Williams' studio in Soho Square to chat with some of my animation heroes...

Tom Sweep is terrific. I particularly love the steely glare he gives the guy who ends up hurriedly eating the bag of crisps.

It's difficult watching the credits because it reminds me that Craig is back in Australia now, Pritch is in LA. When he weren't hard at work it we used to have good times goofing around.

That must have been fabulous to visit the Soho Square studio. Years later I ended up working for Richard Burdett and Tony White for a while. Richard was a great laugh and a really good boss.

I'm a little surprised Pixar didn't clean up here but then I haven't yet seen the winner. It sure looks nice in pictures.