You can't keep a good vampire-hunter down, it seems...

A recent day-trip to Whitstable brought to mind a man of whom I have many fond memories; for Whitstable is not only famous as the place where some of the tastiest native oysters snuggle down in their beds, but also as the residence of that pre-eminent vampire-sleuth-and-slayer, the most gentlemanly film actor of his age --- PETER CUSHING.

The fact that the Hammer House of Horror star made his home beside the long shingly shore of this little town on the Thames Estuary, has now been honoured by naming a street CUSHING'S WALK and designating a spot on what passes for an esplanade, CUSHING'S VIEW...

I first met Peter Cushing when I was in my early twenties. I had ambitions to write and came up with the (not very original) idea of a book about 'actors' and one of the people I approached for an interview was Cushing.

I had already written him several letters as a fan that had led to a correspondence and he responded to my request for an interview with an invitation to visit him at Pinewood Studios where he was filming what would turn out to be one of very few turkeys in his prolific career, Nothing But the Night.

On the appointed day, I was treated royally: given a seat on set to watch filming (I was fascinated by the fact that Cushing, a chain-smoker, wore a white cotton glove on his right hand when not on camera so as not to get nicotine stains!) and I was introduced to his co-stars, his long-time screen nemesis, Christopher Lee, and the pneumatic Miss Diana Dors.

Then I was toured round the studio lot and was shown all those wonderfully phoney facades (walk through the door of a Mexican town and find yourself in a Cornish fishing village!); taken to lunch in the commissary (sitting at the next table to one of my film gods, Ken Russell, who was then filming Savage Messiah); and, after the interview, given a lift back into London by Cushing and Paddy, his Irish chauffer/stand-in. 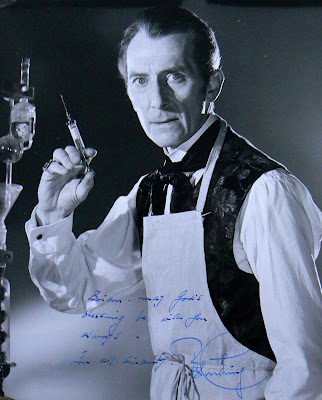 The book never got written but we maintained our correspondence and, years later when I was presenting a book programme on the BBC, I twice got to interview Peter when he published two volumes of autobiography.

My last memory of this warm, courteous and generous man was of his going through the second volume, Past Forgetting, correcting various typos in his immaculate copperplate handwriting - to the complete frustration of his publicist, who wanted to whisk him off to his next appointment!

Anyway, back to Whitstable...

I am sitting propped up against one of the groins on the very windy beach when a man with a loud know-it-all megaphone-voice scrunches over the shingle, holding forth to a companion who hangs on his every word. "Oh, yes," says Megaphone, "I know this beach like the back of my hand..."

I tune-out for a while - to avoid crucial levels of boredom - but then, suddenly, pick up on a name that I know...

"Peter Cushing?" Megaphone is saying, " Oh yes, that's his house over there - the black weather-boarded one..."

"Do you ever spot him?" asks his friend eagerly.

"Well," replies Megaphone, "of course, he's a bit of a recluse, you know, so we don't see him about much nowadays..."

Hmmm! Not too surprising really... Not when you think that the dear man has been dead for almost THIRTEEN YEARS!
Posted by Brian Sibley at 00:01

My memories of Peter are the same as most peoples - he kept us company over many late nights with reruns of the eternally popular Hammer series.When I was growing up those films provided us with a guaranteed diet of naked ladies and bloodshed - the two prequesites of first class entertainment for young boys. It always amused me later on to hear him complaining about the amount of sex and viol (as he always did)ence in contemporary films.Without those old vampire movies I'd probably still not know that when a women opens her dress or her mouth, you have to run for it..... God bless Peter Cushing and Christopher Lee, may they carry on fighting the eternal battle between good and evil forever !

My favourite Peter Cushing is the 1950s British TV version of Nineteen Eighty-Four. I'm not old enough to have seen it first time round, but I've seen the flickery recording of it that survives. Room 101 has never been so terrifying.

Please tell me that the groin you were propped up against on the beach was David's and not some random stranger's!!!!

It's nice to hear that some of your screen heroes are actually as nice as you'd like them to be, especially as I can think of a colleague of Mr Cushing's who's quite the opposite. I reckon Cushing deserves a medal just for putting up with the crushing bore ;-)

BOLL WEAVIL - I think Peter always thought the Hammer films were OK because Good was always victorious. And one of the reasons we loved him as an actor was because he rarely played bad, or even ambiguous, characters and was always on the side of Right!

PHIL - The BBC's '1984' is a something of a miracle. In the '50s, TV plays were performed LIVE (two performances, Sunday and Thursday) and because the first performance of '1984' caused such a furore (including questions in the House about standards at the BBC!) someone had the presence of mind to record the second performance off-air - hence the poor visual quality.

There is precious little of Cushing's TV drama work, though his performances are said to have been very fine - including his Mr Darcy in P&P - so we are lucky to have his brilliant portrayal of Winston Smith in what is still a terrifying presentation of Orwell's nightmare.

IAN - As well as being part of the human anatomy, groins are (as I'm sure you know!): "Structures that extend, fingerlike, perpendicularly from the shore. Usually constructed in groups called groin fields, their primary purpose is to trap and retain sand, nourishing the beach compartments between them."

A colleague of Peter Cushing... Hmmm... To whom are you referring, I wonder...

Whitstable......interesting since this Yank's people came from that place. I was under the impression that it was a tiny, inconsequential little burg. (or so the few Brit's I've encountered would have me believe) Not so, I guess.

Ms M talked about working with Mr Cushing. Said he was an absolute darling. If you want a real challenge, find somebody who has a bard word to say about him. They don't exist.

CHRIS - What can I say? Yes Whitstable IS "a tiny little burgh", but "inconsequential"? Certainly not! Not only do they farm some of the best oysters in England but it was the home town of both P Cushing and (for fans of British TV shows for kids) Oliver Postgate, creator of, among others, Bagpuss!

GOOD DOG - Not picking you up, but I did like "a bard word"! Worth remembering that Cushing gave a notable performance as the fopish Osric in Olivier's 'Hamlet': "A hit, a very palpable hit!"

And for those excercising themselves (and ME!) over whether the spelling of "groin" should be "groyne" when referring to the things on beaches... As far as I can see both are equally acceptable.

I didn't know that use of the word "groin", but I had suspected it was something like that...
I also suspect you, Brian, of using that word just to get us all "thinking"!!! You agent provocateur you!

SUZANNE - I am very happy to be thought an agent provocateur when actually provocateuring, but to be accused of it when harmlessly mentioning a device to prevent the erosion of beaches is most distressing!! ;-)

Yes, Peter Cushing was the quintessential English gentleman. He always strode out with his stakes and mallets just before sunset, to give us god-fearing vampires a chance to escape...