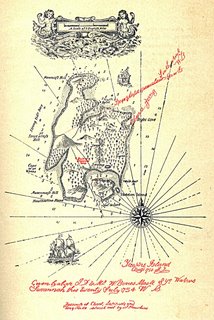 Yesterday's mention of the map of Ambridge, the fictional English village in the BBC radio soap, The Archers, reminded me how much I love maps - and especially maps of imaginary places. After all, whether you are trying to find Brookfield Farm or Treasure Island, a map always comes in handy

There is, of course, something fascinating about every map - perhaps it is the romance of place-names, or the mystery of symbols; maybe its the opportunity to take a bird’s-eye view of some corner of the world, near or far; or, perhaps, the sense of possessing a solution to the puzzle of where things are: the confidence of knowing ‘You Are Here’ or ‘How to Get There’ - or, as a famous map-lover, Mr Bilbo Baggins, would have said: "There and Back Again”.

All maps are a record of a very specific moment in time: the end product of centuries of history, geology and language and every map plots the limits of the mapmaker’s knowledge. That is why, on the earliest maps, those parts as yet unexplored were left blank or marked with such alarming cautions as "Here there be dragons"!

Pretty much ever since men have been making maps of the world around them, they have also been mapping the worlds of the imagination: from Eden to Erewhon, from Hell to Utopia, from Never Land and Oz to Narnia and Discworld, from the dinosaur-infested Lost World to the rabbit-inhabited Watership Down. No place, in fact, is too fantastical for the imaginative cartographer and the moment a map is drawn up - it becomes more tangible, more believable…

My earliest and fondest memory of a fantasy map is the enchanting view of the '100 Aker Wood', allegedly drawn by Christopher Robin (but in truth by E H Shepard) and used as a decoration on the end-papers of A A Milne's Winnie-the-Pooh.

Shepard's depiction takes the form of many fictional maps in being a pictorial as opposed to symbolic representation and includes illustrative depictions of geographical features such as, in this case, Eeyore's Gloomy Place (rather Boggy and Sad, the Pooh Trap for Heffalumps and Where the Woozle Wasn't... 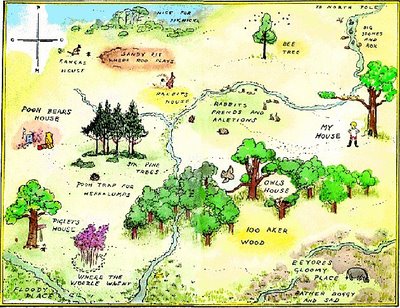 The next fanciful map of which I became aware was the one of Moomin Valley drawn by Tove Jansson for her Finn Family Moomintroll, and which - like a proper map! - folded-out of the book! I was especially intrigued by the fact that it incorporated a detailed plan of the Moomin's fantastical circular house that stands in its garden of lilac, jasmine and tobacco plants.

It also shows the off-shore island populated by the strange and rather scary Hattifatteners that - along with all the other mysterious features of Jansson's remarkable series of books - made the Moomin's world so beguiling, simply because it might not be altogether safe! 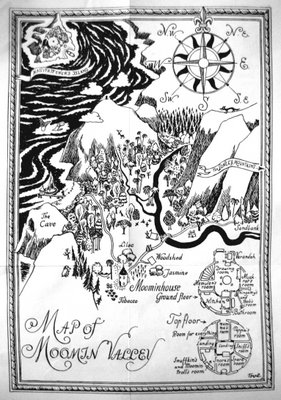 As a young man - having fallen under the spell of J R R Tolkien's The Lord of the Rings - I bought a copy of Pauline Baynes' wonderful poster map of Middle-earth and hung it on my wall where it remained - getting increasingly tattered and pin-holed - for many years and eventually served as a constant reference source when I came to dramatise Tolkien's epic for BBC radio. 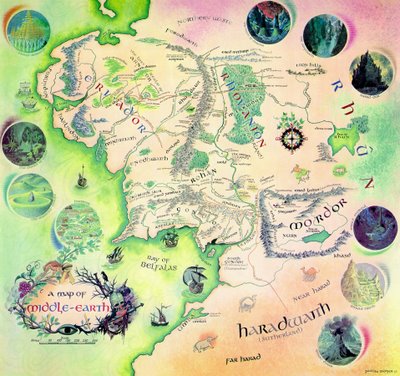 Many years later, I collaborated with another Tolkien artist, John Howe, to create three book-maps based on the Professor's own cartography of Middle-earth for The Hobbit and The Lord of the Rings and Christopher Tolkien's map of Beleriand, the realm described in The Silmarillion. 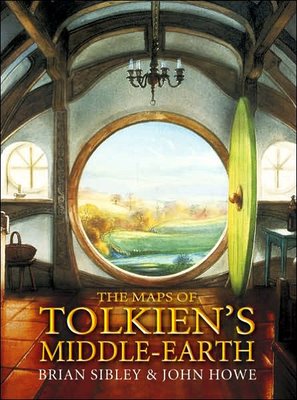 These individual maps (got up in the fold-out form of O S Maps) were later made into a book-and-map collection, slip-cased together with a fourth map of the lost island of Númenor, the fate of which is also chronicled in The Silmarillion. Mainly because it gave me the opportunity to be associated with Tolkien's fastidious map-making techniques and John's great artwork, The Maps of Tolkien's Middle-earth is a book to which I'm proud to have contributed...

Other favourite maps that caught my youthful imagination were those, drawn again by the wondrously skilful Pauline Baynes, for C S Lewis' The Chronicles of Narnia - and her colour representation of the Land of Narnia ranks in my affections, alongside her visualisation of Middle-earth, for its vivid beauty and immaculate detail... 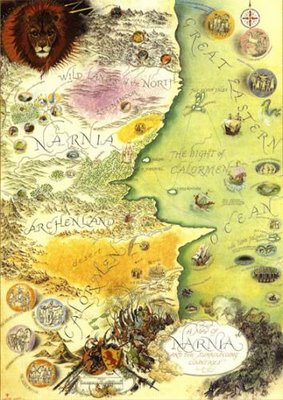 For many years now, Miss Baynes has been a personal friend and I unashamedly admit to being enslaved by her genius, but even if were not friends, I would still say that it is to the shame of Tolkien and Lewis' publishers, HarperCollins, that these two masterpieces of map-work are no longer in print and available to excite young minds in the way that they did for me and, I'm sure, very many others...

Still on the subject of Narnia and Middle-earth, frequent visitors to those lands may enjoy navigating a course over to the web-site of Daniel Reeve, another of my map-making friends. Daniel was responsible for creating the maps (as well as many books, manuscripts and artefacts) for the Peter Jackson movie trilogy of The Lord of the Rings and subsequently worked on the film, The Chronicles of Narnia: The Lion, the Witch and the Wardrobe as well as mapping Skull Island (in the shape of the skeletal foot of an ape?) for Jackson's King Kong. 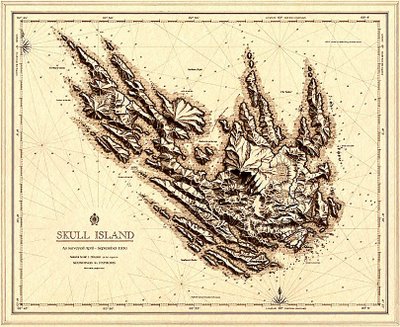 In conclusion, if any or all of these maps seem too demanding for Sunday morning contemplation, then I can offer a simpler example - the chart employed by the Bellman in Lewis Carroll's The Hunting of the Snark:

He had bought a large map representing the sea,
Without the least vestige of land:
And the crew were much pleased when they found it to be
A map they could all understand.

"What's the good of Mercator's North Poles and Equators,
Tropics, Zones, and Meridian Lines?"
So the Bellman would cry: and the crew would reply
"They are merely conventional signs!

"Other maps are such shapes, with their islands and capes!
But we've got our brave Captain to thank:"
(So the crew would protest) "that he's bought us the best --
A perfect and absolute blank! 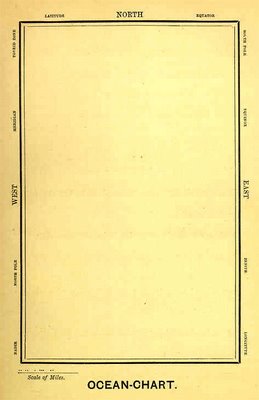 Ahhhh! A true hobbit is a map-lover!
Best regards - Suzanne (the hobbit from Belgium...)

Throughout the 1990's I had two of the maps you have reproduced above on my bedroom wall. When your 'Land of Narnia' first appeared, I believe the colour map came out at the same time. It was the first time I had seen anything other than the books themselves relating to Lewis's magical world and I had the map framed and above my bed.I have to confess I also took the book to work and when we had a colour photocopier on trial, I ran off so many A3 enlargements of those gorgeous illustrations, the machine was declared a financial liability and returned to the manufacturers ! On a lesser scale, I experimented with some fine quality papers to print up the map of Treasure Island and also get that behind glass.It's a book that, like A Christmas Carol', has so many layers to it that it can never be mined out.Throughout my children's childhood, they had to contend with quotations randomly fired at them from their eccentric father. Even now, I feel that they must, like Jim, wake up suddenly, to hear the voice of Captain Flint still ringing in their ears.....
Pieces of Eight...Pieces of Eight...

Pauline Bayne's map of Narnia was published some years before my book (to which Pauline contributed new Narnian illustrations) appeared - but maybe an enterprising publisher re-issued it around that time because I included it as the frontispiece to the book --- which I quite forgot to mention!

Yes, that must be it as I bought the big Baynes map at the same time as your book.There was quite a big display in the childrens section of Waterstones as I recall....:-)

Goodness! I must have been terribly young when I wrote that book!!! ;-)