I have been writing quite a lot about Disney recently and I do realise that not everyone views the goings on in the Magic Kingdom in quite the same light as I do. But even I was a little taken aback by today's The Sunday Torygraph which carried a pretty angry attack on the Mouse House from this benign-looking clerical gent... 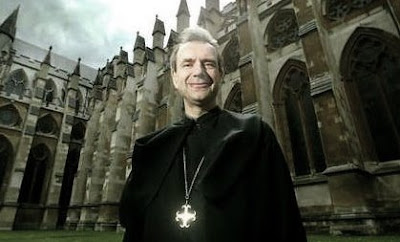 Christopher Jamison, the Abbot of Worth in West Sussex, who "starred in the hit-BBC series The Monastery" (Starred? Is that permissible under an abbot's vows?) accused the Disney corporation of "exploiting spirituality" to sell its products and of turning Disneyland into a modern day pilgrimage site.

Here's an extract from the article by Religious Affairs Correspondent, Jonathan Wynne-Jones...

While he acknowledges that Disney stories carry messages showing good triumphing over evil, he argues this is part of a ploy to persuade people that they should buy Disney products in order to be "a good and happy family".

He cites films such as Sleeping Beauty and 101 Dalmatians that feature moral battles, but get into children's imaginations and make them greedy for the merchandise that goes with them.

"The message behind every movie and book, behind every theme park and T-shirt is that our children's world needs Disney," he says.

"So they absolutely must go to see the next Disney movie, which we'll also want to give them on DVD as a birthday present.

"They will be happier if they live the full Disney experience; and thousands of families around the world buy into this deeper message as they flock to Disneyland."

He continues: "This is the new pilgrimage that children desire, a rite of passage into the meaning of life according to Disney.

"Where once morality and meaning were available as part of our free cultural inheritance, now corporations sell them to us as products."

Fr Jamison, who is one of Britain's most prominent Catholic clerics, claims that brands such as Disney market themselves to be about more than mere materialism to create an addiction to consumption.

"This is basically the commercial exploitation of spirituality," he says, adding that as a result Disney and other corporations "inhabit our imagination".

"Once planted there they can make us endlessly greedy. And that is exactly what they are doing."

You can read the full story here.

And I'll simply leave you with what - I imagine - is Uncle Walt's response... 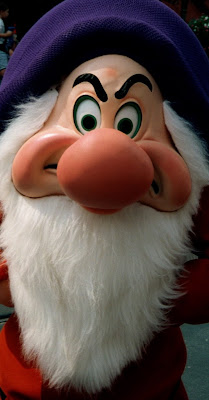 Wot - no 'Happy St Andrews Day to all my Scottish bloggers'?

Re the Disney tirade - I wonder if you were caught between using Grumpy or Dopey.

Hmmm indeed. He could well be describing his own religion there. Or indeed any religion. At least Disney doesn't tell us we will all go to hell if we don't act a certain way.

I hate religion. I detest it. I think the single phrase that encompasses everything I hate about it is "God-fearing". What this essentially boils down to is the fact that religious types act nicely (or in some cases not nicely) to their fellow men, not because they want to, but because they feel they have to for fear of what will happen to them if they don't. It's nothing less than blackmail. They don't act out of their own free will. It seems to me that at least Disney teaches morals that people should excercise because they want to.

So a corporation is peddling family values and a priest has a problem with that ? So the alternative is ? The church has a monopoly on morality which, as its current impoverished state shows, it nevers takes any money from at all....
Perhaps its easier to attack people who show some sort of regard for the quality of their product and where it will end up rather than go after big corporations who put profit above all else.For example,I could name you a large global organisation that is renowned for setting up and enriching itself, often supporting expensive headquarters in very poor countries as it increases its market share whilst living off money collected from the impoverished population of those areas. It's an extremely rich business too and has been for the past couple of thousand years.Can you tell what it is yet ?

Coupbonf : A person or organisation who, owing to their public profile, feels they have a duty to inform the world of their own predjudices and that these will, because of their status, be somehow interesing or important to the rest of us.

Tut! Another example of ridiculously extreme reaction to modern day stuff! Reminds me of those people who thought Harry Potter was an encouragement to dabble in witchcraft.
To be perfectly frank, I think he's talking out of the wrong orifice (excuse my French!)
GEDGZL: an expression used frequently by Grumpy to express contempt...

LISAH - I've always liked St Andrew (a genuinely good egg by all accounts); sorry to have missed his day...

Grumpy or Dopey, but certainly NOT Happy...

ANDY - I'm not excusing religions, but the meaning of "God-fearing" probably had less to do with 'fear' than with 'respect', 'reverence', 'piety' or 'awe'...

BOLL - Like Andy, you make a strong point but, of course, most organisations (spiritual or secular) can be criticised for the behaviour of their adherents...

SUZANNE - Yes, 'Gedgzl' is exactly what Grumpy had to say on the matter!

Exit from any large cathedral and you end up going through the 'Gift shop'. Spend, spend, spend, and save your soul with the reading of improving tomes. I keep looking for a 'relic' to buy but they seem to have run out of pieces of the true cross ~ awaiting the delivery of a fresh supply, no doubt. As for buying an indulgence ~ no chance. This is not to say that Disney is not commercial and don't peddle goodness and 'family values'. So does the 'church' so I expect the Fr. speaks from a position of great authority on the subject.

But why limit himself to Disney though? What about the exploitation of all those other marketeers who peddle trashy souvenirs and memorabilia?

STORICA: The use of the past to sell to the future.