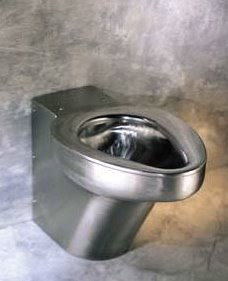 I know, I know! There are those who will say that the tone of this blog is - as they say - really going down the tubes!

But it can't be helped: ELAINE sent me the following story from the BBC News website (so it must be true) and I simply have to pass it on - not for any unintentional amusement it might occasion, but as a vital public warning to my readers...

Man is found glued to toilet seat
A man had to be taken to hospital still attached to a steel toilet after super-glue was deliberately smeared on the seat.

Firefighters were unable to free the man and were forced to remove the entire toilet with the man attached.

The 35-year-old was in a public toilet cubicle in Brierley Hill in the West Midlands when he became stuck. He was taken to hospital where doctors had to get into the ambulance before using chemicals to free him.

An ambulance service spokesman said: "He appeared to be none the worse for his ordeal other than being understandably somewhat embarrassed."

It is thought the glue had been smeared on the toilet seat by a prankster.

An ambulance crew and a rapid response vehicle attended the scene just before midday but they were unable to free the man.

"With the help of a local authority and the fire and rescue service, the man was removed from the cubicle still attached to the stainless steel toilet," the spokesman said.

The toilet was later taken back to the public convenience and re-installed.

Minus the glue, hopefully...
Posted by Brian Sibley at 00:01

Have you checked this story with 'Snopes' or 'Hoax Slayer'? The BBC have lost some credibility lately over their integrity, fiscal spending, and taste. I would be more convinced about the veracity of this if there had been photographic evidence of the event.
Second thoughts, no, that would be too lavatorial even for this blog ~ though it would have afforded a view of dropped pants!

According to Jonathan Ross, the man in question was a much-loved British comedy actor...

What's the big deal ? After a decent Friday night, I'm stuck in the bog for hours. This is just another excuse for this blog to descend to its usual lavatorial humour. Why doesn't that nice Mr Obama do something ?

Give him time - salvaging the reputation of what GWB yesterday called "The greatest nation on the face of the earth" will obviously have to take first priority...

I'd like to know what de-solvent they used - for the next time I manage to stick my fingers together using superglue...

Actually, I live very close to Brierley Hill, so I can give you the story as it was REALLY reported:

Detectives in Brierley Hill are investigating the mysterious overnight disappearance of a toilet. A spokesman said "we are hoping for a few leads, but at the moment we have nothing to go on."

MIKE - I don't know, but I'm assured that dispensers of it will shortly be installed in all cubicles in every public convenience throughout the civilised world.

PHIL - Thanks for the facts! I knew I could rely on someone with common sense and integrity to get to the bottom of things...

As I can see, the authority and the fire and rescue service in England have the same sense of the public service that other members of the fire departments of the world; nice boys and girls that take care of us and of this kind of little problems.

In Spain, for example, many people have being rescue from the telephone boxes, a problem with the mechanism of the coins return (sorry I don't what is the word in english), the mechanism traped their fingers. Other famous case was a poor boy who had problems with a ring, the firefighters could cut the ring without the finger.

But, for the moment, nothing like a problem with a WC.

Can you imagine the queue outside?

EUDORA - I'm sure if it comes to it, your fireman are capable with pretty much any sticky situation...

THE DOTTEREL- Yep, and all the factious comments, (un)helpful suggestions and offers to loan the occupant a variety of objects such as car-jacks and Swiss army knives.