After reading that news story the other week about a man getting, literally stuck in the toilet, I've discovered that finding (too late) that there's glue on a public loo seat is something of an international hazard, as can be seen from this American news report dated November 2005:

Colorado man sues Home Depot
after he was glued to toilet seat
BOULDER, Colo. (AP) - Hardware retailer Home Depot has found itself in a sticky situation, defending a lawsuit filed by a man who said the chain's Louisville, Colo., store ignored his cries for help after he fell victim to a prank - and was glued to a toilet seat.

Bob Dougherty, 57, of Nederland, Colo., said he became stuck to a bathroom toilet seat on which somebody had smeared glue on Oct. 30, 2003 and felt "tremendous panic" when he realized he was stuck.

"They left me there, going through all that stress," Dougherty told the (Boulder) Daily Camera newspaper. "They just let me rot."

His lawsuit, filed Friday said Dougherty was recovering from heart bypass surgery at the time and thought he was having a heart attack. A store employee who heard him calling for help informed the head clerk via radio but the head clerk "believed it to be a hoax," the lawsuit said.

Home Depot spokeswoman, Kathryn Gallagher, said she could not comment on pending litigation.

The lawsuit said after about 15 minutes, store officials called for an ambulance. Paramedics unbolted the toilet seat and while wheeling a "frightened and humiliated" Dougherty out of the store, he passed out.

The lawsuit said the toilet seat separated from his skin, leaving abrasions.

"This is not Home Depot's fault," he said.

"But I am blaming them for letting me hang in there and just ignoring me."

Bizarrely, the photograph used by Associated Press to illustrate this story appears a little bit too Mediterranean for Boulder, Colorado... 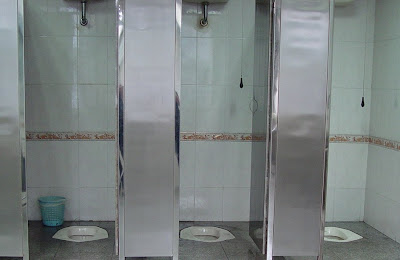 Unless, of course, there were three victims of the fiendish loo-gluer and all of them have had to be similarly unseated.

Or maybe this is the accident site immortalised in that song about a trio of Old Ladies, beginning: "Oh, dear, what can the matter be?"
Posted by Brian Sibley at 00:01

What intrigues me is: what part of his anatomy was glued to the loo? Because in case you hadn't noticed, strictly speaking, those toilets don't have SEATS! The mind boggles!

Exactly so! But I think the picture researcher at Associated Press just Googled 'lavatories' and used the first photo they got hold of...

Of course, that's not to say that there aren't sadistic pranksters in the Mediterranean who don't go around putting super-glue on the foot-plates of those kind of loos - except that all you'd have to do is just step out of your shoes and (unless you were Peter Jackson) it wouldn't be too devastating!

I'm surprised that no one has picked up on the fact that the incident happened in Looisville!

I remember when I was small and we were touring Europe that whenever we needed a loo stop someone volunteered to go in and check if the facilities were 'horse collar' or 'footprints' - if it was the latter and no one was desperate, the girls tended to wait.

Thanks for 'Looisville'! How did I miss that?!

When I was little, on my first encounter with "French" loos, I came running out in tears, crying "there aren't any toilets, there's only SHOWERS"...

I remember a school trip to France when all us girls trouped off to the loo. We duly filed down the stairs only to be met at the bottom by men coming down their staircase and we all wal;ked into the "communal" loo at the same time. Why bother have 2 different stairways !! Bit of a culture shock for us delicate young ladies I can tell you.
(By the ay - the password for this entry is "scesse". How appropriate - is that like in ....pit ???)