THE MAN WHO DREW TREES

In writing about Walt Disney's Sleeping Beauty the other day, I mentioned the work of Eyvind Earle, the American landscape painter and graphic artist whose concepts for the film and extraordinary background designs established the unique look which so totally sets it apart from every other Disney animated feature.

Many of Earle's sketches drew their inspiration from the style of medieval manuscripts such as the French 15th century book, Très Riches Heures du Duc de Berry of which this is just one stunning example... 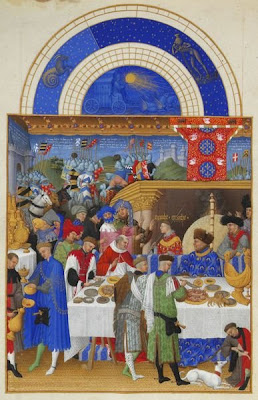 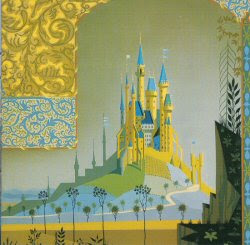 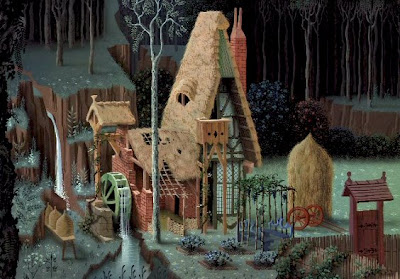 As can be seen from the concept paintings above for the abandoned woodcutter's cottage where the three Good Fairies raise the Princess Aurora (under the disguised identity of a peasant child named Briar Rose) and the picture below, Earle was a master when it came to drawing stylised trees...

I vividly remember the first time I discovered that the Evyind Earle Sleeping Beauty look was not confined to the footage of that film.

I was having lunch with the American novelist and fantasy writer, Ray Bradbury, on Rodeo Drive in Beverly Hills and Ray said there was an art exhibition he wanted me to see in a nearby gallery.

As we walked through the door and I looked at the walls, I knew that whilst I had not seen any of the paintings hanging there, they were all amazingly familiar: that was not really surprising since were by Eyvind Earle... 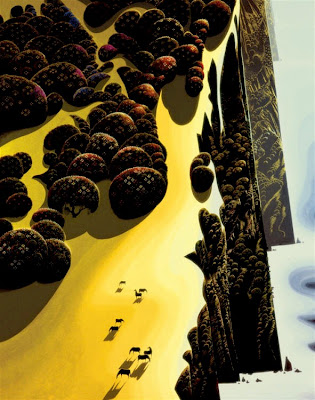 Horses by the Sea
© 2006 Eyvind Earle Publishing
(Click to enlarge) 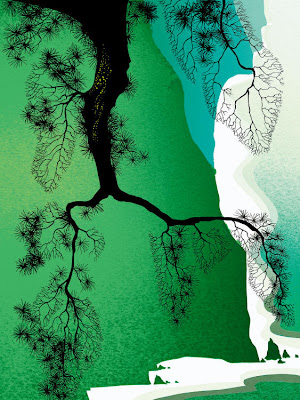 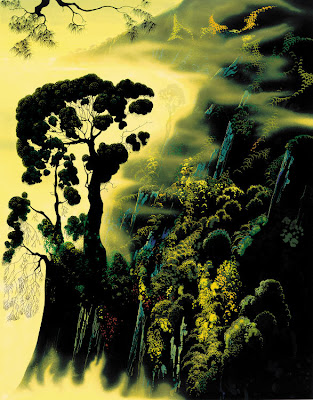 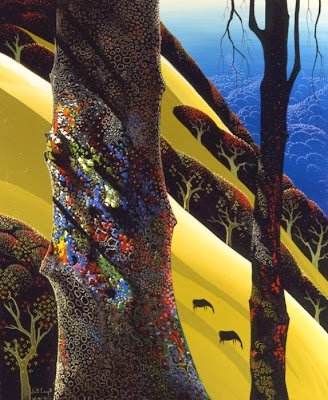 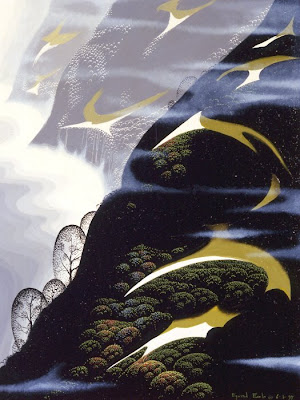 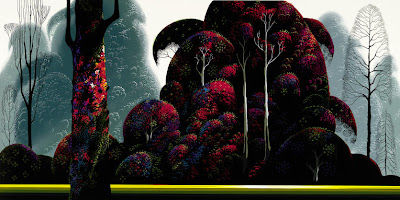 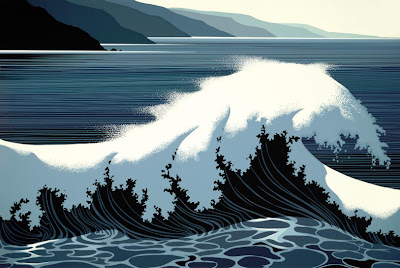 A Sounding of Surf
© 2001 Eyvind Earle Publishing
(Click to enlarge)
Earle was a master of sunlight and shadow and many of his paintings (like some of the cartoons by Britain's comic genius Giles that I was writing about recently) are superb demonstrations in the art of depicting snow... 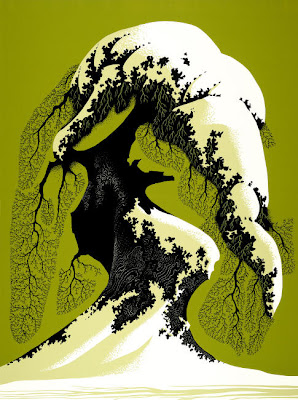 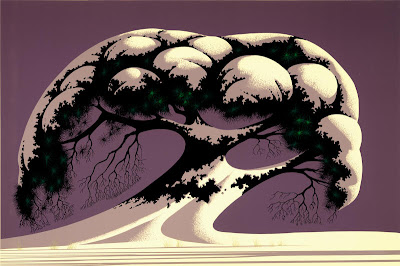 Snow Tree
© 2001 Eyvind Earle Publishing
(Click to enlarge)
Ray, who already owned several Earle paintings, fell under the spell of one of Earle's dramatic landscapes and bought it there and then. The director of the gallery handed Ray's credit card back to him and said that he would have the picture sent round as soon as the exhibition was ended.

But that wasn't going to satisfy Ray. "Oh, no," he said firmly, teaching me a vital lesson about responding with immediacy to one's passions, "I'll take it with me now!" And he did! The picture was unhooked from the wall, wrapped in brown paper and the pair of us manhandled it out of the gallery and into the back of a yellow cab.

I've never been able (and never will be able) to afford an Eyvind Earle original, but David and I do own a few signed serigraphs including a couple of those snow paintings - one, 'Winter Oak' is quite small... 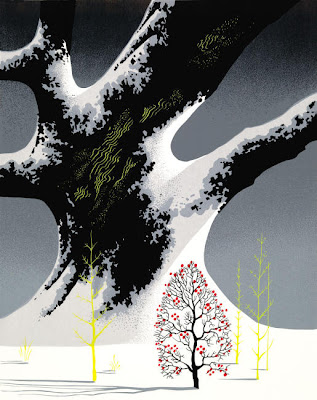 ...but the other - entitled 'Yosemite' - is huge and wall-dominating, but never ceases to move me with its simplicity and power, its sense of the might, majesty and mystery of nature... 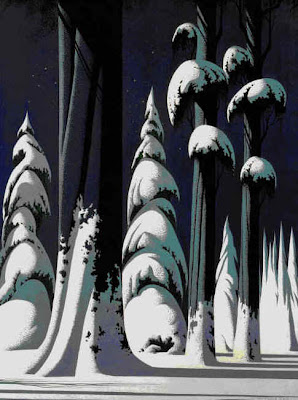 includes a documentary, Eyvind Earle: The Man and His Art.

You can read about Eyvind Earle in his autobiography, Horizon Bound on a Bicycle

Wow! I had never heard of this artist, so I've discovered something.
Those snow trees are amazing! And the "Graze on High Meadows" is just stunning! Thanks for sharing!

Another great story about RB - you are following in the footsteps of those that, many years before, were dragged to see Fantasia ! I recognised 'Yosemite' and even me, with no appreciation of art, recognised it as a great piece.The trees remind me of some in the Lake District that are perched at crazy angles on cliff sides, their characters permanently shaped by the beautiful desolation around them.

Manicses: A feeling of inferiority experienced on viewing a collection of artwork that, notwithstanding its breathtaking universality, light and beauty, reminds us of a big puffy cloud and the man down the road's dog.

DRAGONLADY - You're very welcome! :-) Earle is, I think, a truly one-off talent.

BOLL - Great 'word verification' definition! One of your best yet!

This has been a very distracting post for me. While writing I've kept coming back to your blog to gaze in awe at these beautiful, beautiful paintings.

Sunset Silhouette was my favourite until I saw the wonderful Yosemite.

We always talk about the brilliant Disney animation from the Nine Old Men onwards, but everyone should be constantly reminded just how brilliant the background art was as well.

Thanks for sharing Earle's work.

Sorry for the distraction, Good Dog! I sometimes think it was a pity that Earle worked on relatively few Disney films, but then if his work for the studio had been more prolific Sleeping Beauty wouldn't have been quite so individual!

I new artist for me, thank you.

I can see in his work something oriental, something japanese or chinese, but with a refreshing style, a little bit of Bosch and Brueguels, in their most optimistic paintings of course.

Don't apologize, it was one of the best kinds of distractions.

And you're absolutely right about not flooding their catalogue of films with the same design styles. That's what makes them so individual.

Oddly enough, although The Little Mermaid marked a resurgence in Disney movies, leading on to Beauty and the Beast, The Lion King, I don't find them as satisfying as the wonderful earlier films because the pretty much conformed to the same kind of (musical) story template.

I do love The Emperor's New Groove because it's just barking and the equal nuts Lilo & Stitch because they break from those structural confinements.

Anyway, back to gazing at the trees...

ANDY - As I'm sure you realised (being an artist) that snow - as with Giles' pictures - is an absence of paint...

EUDORA - Yes, there's a definite oriental inspiration to Earle's work: a complex arrangement of the simple - almost sparse - and the intensely detailed...

GOOD DOG - I couldn't agree with you more: New Groove and Lilo & Stitch were the most imaginative and visually exciting Disney movies in years...

Well the snow is beautifully left out then!!

this was so interesting! his work is brilliant. His snowy landscapes remind me of a Russian landscape painting by Ivan Shishkin.

ALEX - That's what I love about blogs: one thing leads to another. I didn't know Ivan Shiskin's work but have started looking him up. There's a good initial resource page here and a search on Google images will reveal a lot of his pictures.

I came across his work in an exhibition on Russian Landscapes at the National Gallery - ooh must have been about 4 years ago now. I was totally stunned by all these amazing works, by artists I'd never heard of - and I'd written my dissertation on Romantic landscape painting, so I thought I knew something on landscapes!

The paintings of Arkhip Kuindzhi and Isaac Levitan were also amazing!

You're lucky to have seen Earle's originals-what size are they in general? I imagine he worked quite small, almost Persian miniature size?