THE GUY IN QUESTION

November 5th is - or was in the days of my youth - Guy Fawkes Day.

Overseas and New Readers (and, frankly, anyone under the Age of Thirty) who asks "Whose Day?" might care to bone up on Mr Fawkes and his famous Gunpowder Plot by reading last year's November 5th Sibley-blog.

Having done so, you can then join the rest of us in smiling at this cartoon by the brilliant Simon Pearsall... 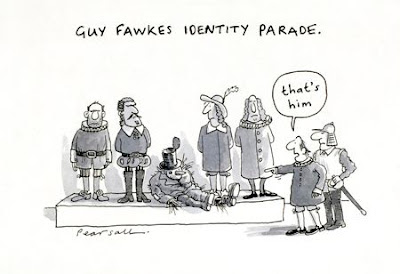 Of course, in the case of the real Master Fawkes, having been identified he came to a nasty end, but, true to the code of the martyrs (and forgive me for making a traitor into a bit of a hero) he valiantly made his exit, managing to cheat the axeman of the pleasures of drawing and quartering his body -- at least according to William Harrison Ainsworth's 'historical romance' (how much of each being open to conjecture) Guy Fawkes or The Gunpowder Treason...

Guy Fawkes now alone remained, and he slowly mounted the scaffold. His foot slipped on the blood-stained boards, and he would have fallen if Topcliffe [the man responsible for torturing Fawkes], who stood near him, had not caught his hand.

A deep silence prevailed as he looked around, and uttered the following words in a clear and distinct voice: "I ask forgiveness of the King and the state for my criminal intention, and trust that my death will wash out my offence."

He then crossed himself and knelt down to pray, after which his cloak and doublet were removed by the executioner's assistant and placed with those of the other conspirators. He made an effort to mount the ladder, but his stiffened limbs refused their office. "Your courage fails you, sneered Topcliffe," laying his hand upon his shoulder. "My strength does," replied Fawkes, sternly regarding him. "Help me up the ladder, and you shall see whether I am afraid to die."

Seeing how matters stood, the executioner who stood by leaning upon his chopper, tendered him his blood stained hand, but Fawkes rejected it with disgust, and exerting all his strength, forced himself up the ladder. 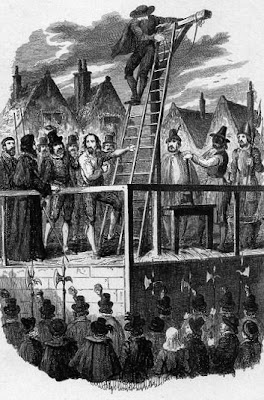 As the hangman adjusted the rope, he observed a singular smile illuminate the features of his victim. "You seem happy," he said. "I am so," replied Fawkes, earnestly, "I see the form of her I loved beckoning me to unfading happiness."

With this, he stretched out his arms and sprang from the ladder. Before his frame was exposed to the executioner's knife life was totally extinct.

On reflection, of course, it does seem rather regrettable that it took such a barbaric event to give the English an excuse to let off a few fireworks once a year...

Yes, I too have noticed that Halloween & Guy Fawkes' night seem to have morphed into one "event"... Ridiculous.
Mind you, a little girl of my acquaintance was very recently taken to visit the house where GF lived and learned all about him - so maybe there is some hope for future generations!
Of course, here in Belgium, now that Halloween is over (& nobody here really knows what that's about apart from witches & pumpkins) all is concentrated now on St Nicholas & Father Christmas... any excuse to get people to spend what little money they have!

Yes, well, at least St Nick commemorates a birth rather than a death!

I think, in all fairness, we are celebrating the saving of the King's life on 5th November - possibly a date chosen deliberately for exposure of the plot by Robert Cecil who knew that James I held the 5th as a special day. In Scotland he had already defeated one plot against his life on that date and so held it as a lucky day. It's unlikely that the scheming Cecil wasn't already aware of what was going off before that. It served his purposes to have such a crime as an excuse to tighten up on the Catholics.