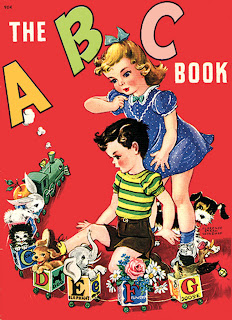 I just recover from answering one meme (the one asking me to list my frequently watched movies) when, knock me down with a feather, along comes another one: this time courtesy of my friend SCB at Where there are Meadowlarks...

Here are THE RULES (for there must always be RULES) as laid down by SCB:

1. Go through the alphabet, and for each letter, think of a book you've read that starts with that letter (A, An, and The do not count).

2. You must write down the FIRST book you think of for any given letter. This may make for some odd choices, but them's the breaks.

3. You must have actually READ the book. (I thought of lots that started with some letters, but I hadn't read them.)

5. If you can think of a book for X, you win... my lasting admiration (I can't afford real prizes!)

6. You can then tag as many people as you like. The more the merrier.

The Exploits of Moominpappa – Tove Jansson

The Lord of the Rings – J R R Tolkien

Noddy in Toyland – Enid Blyton
(Nostromo by Joseph Conrad would have sounded better, but there it is!)

The Once and Future King – T H White

The Voyage of the 'Dawn Treader' – C S Lewis

The Wind in the Willows – Kenneth Graham

EXterminator! – William S Burroughs (Oh, well, it was worth a try!)

Yertle the Turtle and Other Stories – Dr Seuss

Zen in the Art of Writing – Ray Bradbury

I suppose it's not too surprising that there are two titles by Tolkien and three by Bradbury – plus, of course, Carroll, Milne and Peake – but the preponderance of children's books suggests that I have already entered my second childhood which is, I guess, pretty accurate!

I hesitate to tag anyone, but (if they'd like to do it and have the time) then I'll tag Gill, Sheila, Sharon, Suzanne and anyone else who fancies having a go...
Posted by Brian Sibley at 00:01

Thanks for that Brian! I shall try and comply, and try to avoid the same titles as you! How long have I got?
backto..... my bookshelves!!

Thanks, Brian, I'll give it a go. But I'll have to try and get your list out of my head first!

Best of luck, Suzanne and Sheila! No precise time-limit – sometime within the reach of human memory would be good! ;)

Will have a go later as well.

This was more difficult than I expected. An analyst might find the emphasis on Victorian fiction of interest, but I think it's because once you've thought of one (like A Christmas Carol, the genre is in your subconscious). Anyway, here goes:

Thanks for the invitation - it was an enjoyable diversion!

Look forward to your list, Sharon; and thanks so much for your's, Sheila, which contains several books I've never read and several others that I have read but that refused to take the bait when I was fishing around in my memory for titles!

Thank you so much for playing along, Brian! I was delighted (but not surprised) when many of your choices were books I'd actually read. (Unlike the books listed by my American friends. Interesting, that.) As for your attempt at an "X" book -- I could have been sneaky and put a vowel in front of the X, too! I chortled at the inclusion of Noddy in Toyland -- and yes, that's one of the titles on your list that I've read!

Sheila -- your list also had many familiar titles, and I prevaricated for quite some time about using Under Milk Wood, which is what occurred to me first for "U", and finally went with Helene Hanff's "Underfoot in Show Business". But since you chose it, I (who made up the rules) now feel justified in having nearly chosen it. Thanks for participating!

A couple of gaps, I'm afraid, but here goes:

Blott on the Landscape - Tom Sharpe

Lord of the Flies - William Golding

Sharon and Suzanne – Two more fascinating lists and many more books I know by name but have never read. Must get around to some Tom Sharpe sometime (I only know his books through the TV versions) and I must re-read To Kill a Mockingbird and re-watch Gregory Peck in the brilliant movie version.

To Kill a Mockingbird is one of my alltime favourites. When the BBC did their "Top 100 books", I did my own Top 10 and Harper Lee was way up there! I'm glad you accepted my "K"!

I'll leave SCB to adjudicate on that one, but you really can't get away with The Prisoner of Zenda for 'Z'!!! :)

That's some list of books you've read Brian, I've read some books but not enough to name the alphabet - although I have read Alice's Adventures in Wonderland - although one of my favourite books of all time is Animal Farm.

Well, Steven, since Animal Farm begins with an 'A' (and is a truly great book) that's a pretty good beginning to any literary alphabet! :)

Had a go over on the blog. Tagged Stephen Gallagher, who stepped up to the plate and even found a book starting with X.

Far too late for inclusion, but I belatedly remembered a genuine X-title: my late friend, Antony Miall's The Xenophobe's Guide to the English!