HIGH ON THE HOG

The other day I was celebrating Charles Dickens' A Christmas Carol, the greatest story to ever be inspired by the festival of Christmas. In 1996, I made a programme for the BBC marking the publication of a new seasonal amusement  by a man who was – and still is – our greatest fantasy writer, Terry Pratchett. 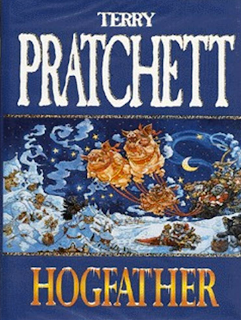 In Discworld, Pratchett's parallel universe, the equivalent to our Father Christmas is the weirdly-named Hogfather who grants children's wishes and brings them presents on Hogwatchnight (December 32nd).

When certain forces decide to eliminate the Hogfather because he does not fit into their view of the universe, that most enigmatic of Discworld's inhabitants, Death, decides to take on the Hogfather's job in order to maintain people's belief in the character. Dressed in a long red cloak and a beard, Death does his best – or worst – and things start to become complicated because he inevitably takes the children's wishes rather too literally!

I hope you enjoy my conversation with the remarkable Mr Pratchett. The reader is the wonderful Stephen Thorne – my sometime Treebeard and Aslan!