I have been hugely privileged, as a Disney fan, to have met a number of the actors who have lent their voice talents to the heroines, villains and creatures in classic Disney movies: among them Snow White, Alice in Wonderland, the Little Mermaid, Cinderella, Belle, Pocahontas, a couple of generations of Mickey Mice, Donald Duck, Maleficent's Goons  and the fiendish Cruella de Vil.

And, speaking of the dog-napping owner of Hell Hall, I have recently – though the good offices of my friend, Jonathan Dixon – become acquainted with British-born actor, David Frankham... 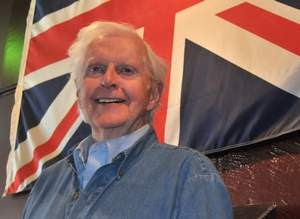 David's Disney credential is having spoken for that most efficient of felines, Sergeant Tibbs, who helps rescue the imprisoned Dalmatians from Cruella's sinister grasp – despite having to cope with the inadequacies of the Colonel the sheepdog, his hard-of-hearing superior officer... 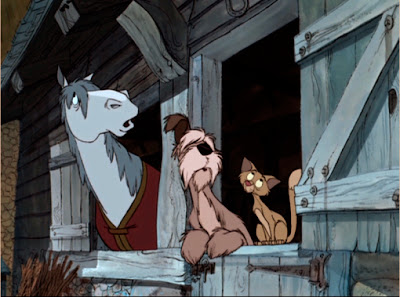 To speak up for a Disney character is to be guaranteed of a very special kind of immortality that oddly merges anonymity with universal recognition! 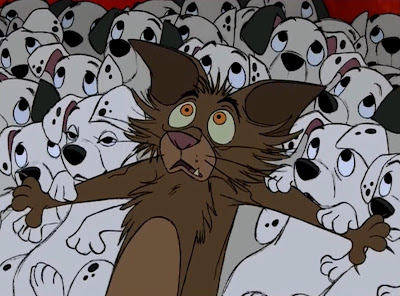 For some Disney voices it is their sole claim to fame, but for David Frankham it is just one of many roles on film and TV that are a testimony to his diverse talents, as I realised when, a little over a year ago, I read the first draft of David's autobiography, written with Jim Hollifield, Which One Was David? The self-deprecating title, incidentally, comes from a remark made by his father to his mother after seeing him on stage for the first time...

After a childhood growing in blitz-torn London and the Scottish home of his  shepherd grandfather, David served with the British army in Singapore and became the camp's unpaid disc-jockey: a job that, post-war, led to his becoming a BBC news-reader and presenter.

As a result of interviewing star performers from both sides of the Atlantic, David got seriously bitten by the showbiz bug and, aged thirty ('Much to old to become an actor!' warned Alec Guinness) he followed many another Brit to Hollywoodland.

Contrary to Sir Alec's prognostication, David was soon busily appearing in such films as The Fly, Master of the World and Tales of Terror, seen here with Basil Rathbone in segment based on Edgar Allen Poe's The Case of M Valdemar... 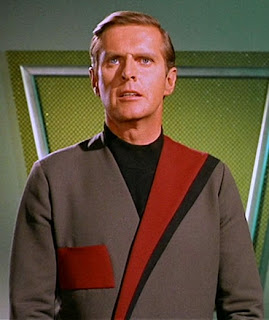 On TV, he was seen in a raft of shows, among them 77 Sunset Strip, Maverick, Alfred Hitchcock Presents, The Jack Benny Program, Thriller, The Outer Limits, Doctor Kildare, The Beverly Hillbillies, McCloud, Cannon, The Six Million Dollar Man and The Waltons.

He is also remembered by Star Trek fans in the role of Larry Marvick, the 23rd Century engineer who helped design the USS Enterprise in the first season episode, 'Is There in Truth No Beauty?'

What fascinated me as much as the work David did in front of the camera, was the friendships he formed with a host of legendary names, many of whom had been his youthful heroes. As a result he found himself taking tea with Boris Karloff, playing bridge with Rock Hudson, reading Japanese poetry with Marlon Brando, hanging out with Liz Taylor and Greer Garson and learning to drive from Gladys Cooper. 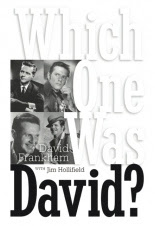 My enthusiasm for David's story led to my being asked whether I might care to endorse the book with a few encouraging words on the book jacket. The trouble was, once I started writing, I got a bit carried away and, before long, my testimonial grew so long it turned into an Introduction!

I am delighted to be associated with David's delightful memoir and am now awaiting the published volume and a chance to re-read this intriguing and engaging piece of movie history.

Which One Was David? is available from Bear Manor Media
Posted by Brian Sibley at 00:00

Hi, Brian! Thanks for this nice entry!

Seeing the photo of David from "Tales of Terror" here reminds me of something Pete Emslie wrote in his blog once:

That after years of knowing only Sgt. Tibbs, he finally saw David's actual face in "Tales of Terror" and was struck by how much Tibbs looks like the real David -- or vice versa -- and how the artists managed to translate a human facial structure into cat facial structure, while still keeping it recognizable. (And being a brilliant caricaturist, Mr. Emslie knows his faces.) He specifically mentioned the big eyes with a "perpetually worried expression"!

Looking at Bill Peet's original storyboards of the Sgt. Tibbs scenes, one can even see that his original concept of the cat was quite different from the final version -- with big fluffy cheeks -- and David remembers that there were two artists sketching him from a few feet away while he worked on the voice recording with J. Pat O'Malley. I wish we knew who they were!

By the way, once I asked David if he did Tibbs' trademark salute while he was recording, and he remembered that, yes, he did ... that he would have done it reflexively from having been in the British Army only a decade before.

I think Eric Larson was the lead animator on the Colonel and Sgt Tibbs with Julius Svendsen, Cliff Nordberg and others.

You can see the draft scripts with artists' names beginning HERE. Having viewed that page, copy the URL changing the final number each time up to _145 to see the entire sequence.