Thirteen Dwarves and a Wizard... 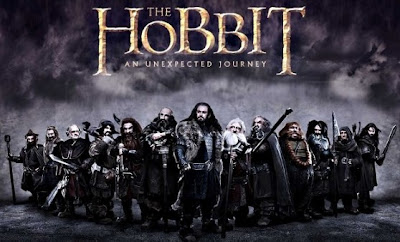 A secret mark on his round green front door is, for Bilbo, the confusing start to a bamboozling evening of Dwarvish mayhem and the beginning of an Unexpected – but long-awaited – Journey...

Yes, as you cannot fail to have noted: the first of Peter Jackson's trilogy of films, The Hobbit, is finally in the cinemas and packing in the denizens of modern-day Middle-earth in their droves! 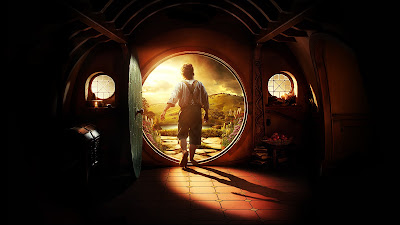 Quite a few of the critics are carping: it's too long, too indulgent, too repetitive, too 'baggy' (well, it is about a Mr Baggins of Bag End!) and complaining that it bores from over-burdening a slight novel with an injection  of that sense of urgency and life-and-death drama that was an inherent quality of The Lord of the Rings but which is not an ingredient of Tolkien's first foray into Middle-earth.

The truth (as I see it) is that the critics would have carped whatever Peter Jackson had given us: if he had put the original book on film it would have been nothing more than an episodic series of exploits piled one on top of another without any driving narrative than a succession of dangerous encounters with weird and wonderful creatures. Tolkien's thirteen Dwarves are, for the most part, hardly fully-fleshed characters and the mission of Thorin and Company, as presented in the book, is hardly comparable with the struggle to save the world that later falls on Frodo Baggins.

Tolkien wanted to re-write The Hobbit to make it more closely integrated into his later discoveries of concerning the War of the Ring, just as he sought to make that story part of the much older mythology of Middle-earth that was The Silmarillion. For my money (although, actually, my ticket was free!), The Hobbit: An Unexpected Journey brings the story into a form that extends and adds to what is now the Rings film mythology. As a result, the Quest for Erebor has a deeper resonance that links it to the darker dangers encroaching on Middle-earth...

Is the prologue too long? Not for me: like everyone, I was waiting for 'In a hole in the ground there lived a hobbit...' but the back-history of the Dwarvish kingdom of Erebor (dizzying vistas of carved stone halls and vast mining enterprises) and the coming of Smaug in a torrent of fire provides an exciting 007-type overture before the safe and secure bucolic beginings at Bag End. We are then permitted a brief opportunity to enjoy the familiar surroundings of the Shire while Bilbo is introduced to the the roistering company of Dwarves, before setting off into the wild, from which point on it's pretty much full speed ahead: trolls, orcs, Elves, stone giants, goblins, wargs and eagles until the cliff-hanger ending. 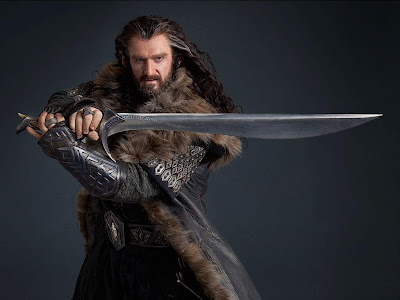 Thorin's troop of thirteen (a daunting challenge in terms of en masse characterisation) are distinct and separate personalities whom we gradually get to know while Sylvester McCoy's Radagast the Brown is a delightfully quirky addition to the ranks of wizardhood and an accessible conduit to understanding the rising menace of the Necromancer (aka Sauron) and the corruption which he is already bringing upon Middle-earth. 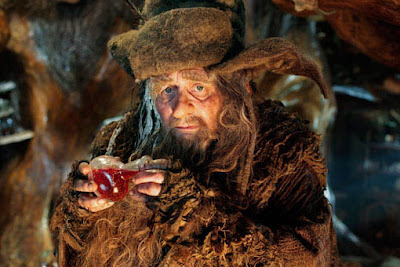 Ian McKellen is safely back as Gandalf the Grey in near-control of the goings-on: by turn wise, solemn, cantankerous and twinklingly mischievous.
And other familiar friends look in from time to time (Ian Holm as the older Bilbo with Elijah Wood's Frodo, and Cate Blanchett, Hugo Weaving and Christopher Lee as Galadriel, Elrond and Saruman) and, of course, Andy Serkis as the schizoid Gollum/Smeagol who ricochets between playful and homicidal and whose 'Riddles in the Dark' encounter with Bilbo is the plum prize of the whole show. 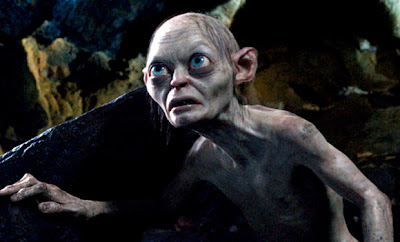 Talking of showmanship, there are inevitable moments where the Peter Jackson's Barnum-esque three-ring-circus strays perilously close to excess (and for some will be deemed to have overstepped the bounds of credulity) with hurtling falls survived without harm, Harold Lloyd danglings from vertiginous heights and extreme calamities avoided by beyond-miraculous serendipity; but Jackson in Middle-earth without the occasional roller-coaster ride would now be unthinkable.

There has been much talk about the alleged demerits of the film's 48fps format – most of it frankly Luddite nonsense that, I suspect, its critics will eventually come to regret and recant. I loved the hyper-reality it gave the film and the vividness and intensity of the imagery – especially when soaring over the stunning New Zealand landscape. 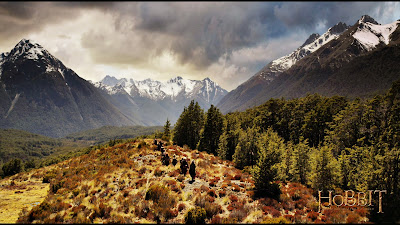 The 3D gives the film depth and immersiveness, heightening mood and enhancing the action with, happily, few those traditional poke-in-the-eye effects that crudely yank you out of the story.

J R R Tolkien's The Hobbit, is charming, delightful and filled with a joie de sprit, but in terms of the History of the Ring, it is little more than an accidental prelude. Peter Jackson's The Hobbit has all the inventiveness of the book set within the context of the formidable drama that begins within the pages of The Silmarillion and finds its resolution in The Lord of the Rings. The amalgamation of the intimate and the epic works its spell and, I believe, will continue to do so until, two years down the line, we have all been There and Back Again...

And, of course, you can read about the making of the film in this quite exceptional publication!! 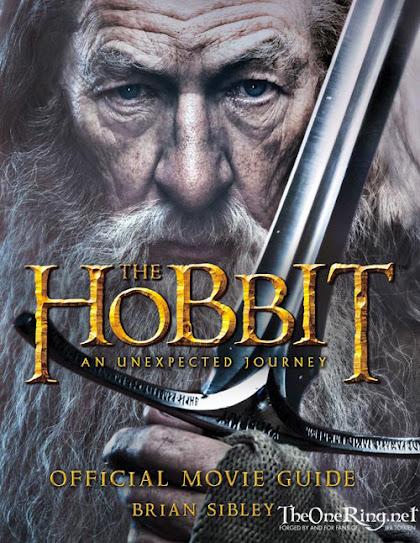 To quote Starburst: The Hobbit: The Offical Movie Guide is detailed, pretty and a very nice size (size matters, in cases such as this). It does a great job of whetting the appetite for the forthcoming film and celebrating the minds behind it. To paraphrase a certain Smeagol - the preciousss is nice. Juicy. Scrumptiously crunchable. Well, maybe not that last bit. It is only a paperback, after all.

It's a "quiet exceptional publication"? I'm sure it's anything but, Brian!

(Really good to discover your blog, and thank you for your insights on TUJ)

I think you meant to say "quite" rather than "quiet" in your last sentence - unless there' s a "loud" audio book version on the way ;-)

Long ago enough to invite you to dinner at the 101 Gaudy (and we didn't even have to get the dwarves to wash up!)

An, THAT Ch Ch! I thought you meant Ch Ch, Chislehurst – part of another life! Of course I remember now: a fantastic evening! How good to hear from you! :)

So I'm leafing through your excellent Official Movie Guide - a Christmas present - when for some reason I flip to the back and find the acknowledgements.

Imagine my surprise and delight at finding MY name in YOUR book! Thank you, Brian, for your thank you! 'Twas a real pleasure to play a small part in the process - bring on films (and books) 2 and 3!

And of course: Merry Christmas!

You are welcome, Ryan! Now, listen... I know you are 13 hours ahead of us, but it's a BIT early to be opening Christmas presents, isn't it?

True enough, Brian! But when we get packages in the mail from Across the (Other?) Water, it's sometimes too hard to resist opening them straightaway!