One-hundred-and-sixty-nine years ago today ≠ 19 December, 1843 – the London publishing company of Chapman and Hall issued a small red-bound book by one of the greatest writers of the day. Almost instantly this volume was hailed as a masterpiece and the intervening years have done nothing to diminish its reputation. 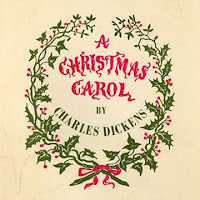 Charles Dickens' A Christmas Carol introduced into our language the names of 'Ebenezer Scrooge', 'Jacob Marley', 'Bob Cratchit' and 'Tiny Tim' along with the phrase 'as dead as a doornail' and that egregious seasonal appellation, 'Bah, Humbug!' that has resolutely lingered on – as is testified to by this festive offering from Tesco's cake department... 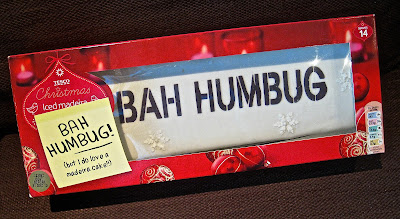 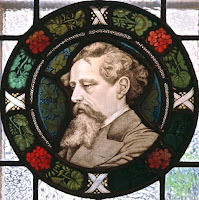 Writing in Fraser's Magazine in February 1844, William Makepeace Thackeray expressed the opinion that A Christmas Carol was 'a national benefit and to every man or woman who reads it, a personal kindness.' He continued: 'The last two people I heard speak of it were women; neither knew the other, or the author, and both said, by way of criticism, "God bless him!"'

There is, seemingly, no end to the permutations worked on Dickens' original: the story has been turned into a score or more of films and TV productions, untold stage adaptions (including operas, ballets and musicals) and recordings on radio, gramophone and CD. There have been versions featuring The Flintstones, The Jetsons, The Muppets, Mickey Mouse and Mr Magoo and even (heaven help us) Barbie! There have been black Scrooges, Jewish Scrooges, female Scrooges and, this year, a gay Scrooge...


But it really doesn't seem to matter how often this little tale is re-presented, re-interpreted, referenced and parodied by illustrators, cartoonists, dramatists, composers and filmmakers, the glorious spirit of Dickens' original fable always manages to shine radiantly through.

In 1993, I celebrated what was then the 150th anniversary of the publication of this most remarkable book with a radio feature entitled, obviously, Humbug! If you've never heard this programme – or even if you have! – you can tune-in below as an accompaniment, perhaps, to a glass of something warming and an early mince pie!

Our cake still lives ! And intact to ! If any of the blog regulars are in north yorkshire, castle howard is displaying a first edition of the carol signed by dickens himself.

The gay Scrooge looks very interesting but it does give me the notion that we are moving ever closer to the type of TV that Donner parodied back in the 1988 'Scrooged'.Back then it looked hilarious. Now it looks suddenly less far-fetched.The voice- over is uncannily similar.Can't wait to see Scrooge and Marley - how did they avoid calling it simply 'S&M'