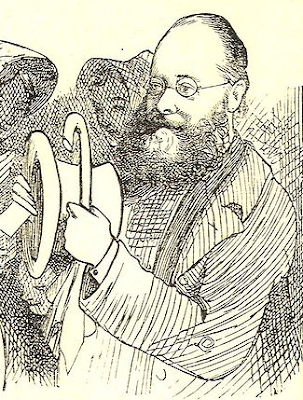 This year marked the bicentenary of the birth of Edward Lear, nonsense poet, painter of birds and landscapes and sometime drawing-teacher to Queen Victoria.

I have always been intrigued by the life and work of Lear and, in particular, his struggles with what must have seemed, to a buttoned-up Victorian, the doubly unbearable curse of epilepsy and homosexuality.

Maybe this mental suffering spurred the creation of the bizarre characters and sadly unrequited lovers in the various volumes of  Nonsense Songs and Stories that he wrote and illustrated from 1846 onwards... 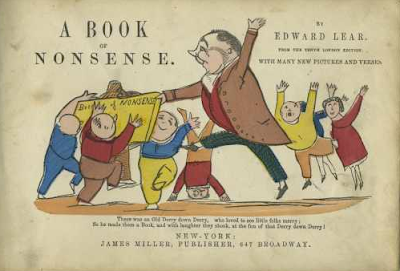 A recurrent theme within the pages of his books are eccentric partnerships or unfulfilled liaisons famously including the Owl and the Pussycat, the Nutcracker and the Sugar-Tongs and Mr Daddy-Longlegs and Mr Floppy Fly depicted here (engaged in their favourite pastime of 'battlecock and shuttledore') by that staggeringly gifted draughtsman (and a recent addition to the blogosphere) John Vernon Lord... 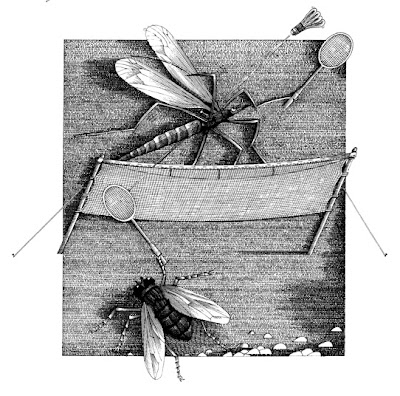 All these characters (along with many others) appeared in To Sea in a Sieve, a musical play which I created in collaboration with my friend the composer, David Hewson. 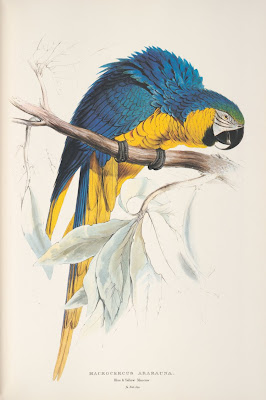 It was first staged at the Edinburgh Festival Fringe in 1989 with myself as Lear and the wonderful Polly March as the Pussycat to my Owl, the Lady Jingly Jones to my Yonghy-Bonghy-Bo and the Jumbly Maid ('with her sky-blue hands and her sea-green hair') to my Dong with a Luminous Nose.

Polly also played Ann, Lear's mother-substitute sister; Augusta ('Gussie') the former child friend to whom Lear almost proposed marriage; the aforementioned Queen Victoria and a fearfully  loquacious parrot! David Hewson's music was performed by the talented Stephen Daltry and our combined efforts were well-received – apart from the critic who mentioned that we sang a song about 'a DOG with a luminous nose'! 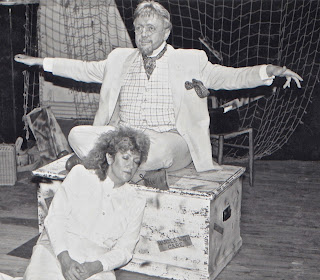 The following year, 1990, saw To Sea in a Sieve have a successful run at The Theatre Upstairs at London's (now long gone) Westminster Theatre. Miss March and I reprised our roles with, on this occasion, the composer at the piano.

Here for (I hope) a little year-end amusement and enjoyment is a recording Polly, David and I made of the songs and poems featured in To Sea in a Sieve...

The amazing thing about Lear was that he wrote against the height of the Romantic period in early Victorian poetry. His nonsense came out of left field whilst everyone else was trying to recall the lost rural idylls of the English arcadia.There really was no tradition for him to follow (even the nursery rhymes made sense initially).His work still intriegued and gripped us in the 1970's on the 'Tomfoolery' show.Does anyone remember that nowadays ?

Tomfoolery?? Of course I remember it: Lear, Lewis Carroll and Ogden Nash brought to animated life!

And here's something you MAY not know about me, Boll (and you know more about my career than most!): I had an interview for a job as an animator with John Halas (of Halas & Batchelor) at the time the studio was making Tomfoolery! Sadly I didn't sufficiently impress JH, although we later became good friends and –––– here's where it gets really spooky....

I wrote a profile of John for The Times when he made his 1981 film Dilemma. When the film was premiered at BAFTA, I saw that John had reproduced my article on the back of the film's credit sheet and, at the after-show drinks, I was approached by a young man who identified me as its author. I didn't immediately recognise him but then discovered we had attended the same secondary school where he was already a gifted pianist and budding composer – in fact, one of his first compositions was an overture to the last end-of-term play I devised. It transpired that he had co-written the score for Dilemma...

His name was –– DAVID HEWSON and we later collaborated on To Sea in a Sieve!!

And here's a link to an article on Tomfoolery!

I have to admit that I DID know that about you because I remember us discussing it before when you were pleased to find someone else remembered it ! I also know Dave Hewson as composer of the music for 'Fox at the Manger' which is absolutely superb.

Further to our recalling Tomfoolery, I remember the BBC had there own version of it which was Egbert Nosh, a cartoon character who was followed by his dustbin. Does anyone else remember that ?

Goodness, Boll! You DO know everything about me, don't you! If only I was famous enough to merit a biography you would be the perfect biographer! :)

Yes, I remember Egbert Nosh (narrated by the wonderful Arthur Lowe) but I can't find much about him other than this.

Enjoyed this immensely! You made quite a dapper Lear! I once ate at a cute restaurant called "The Runcible Spoon" (they serve amazing coffee, no mince or slices of quince!); but I had never heard that Lear was an art tutor to Queen V. I learn so much from your blog - what experiences you've had! Thanks for taking us along...may 2013 be a blessed year for you. :)

Thank you, Wendy, glad you enjoyed the recordings. It was a very physical show with a huge amount of movement ('dancing' would be a misrepresentation of the facts!) and, at Edinburgh, Polly and I also appeared in a Maxim Gorky play in the evenings – AND ran the venue. It was only 22 years ago, I wonder what became of my energy in the subsequent two decades...?