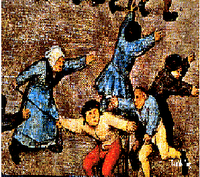 But this is another Brian Sibley who lives in the USA.

So, here are my five little-known Sibley facts.

1) Performed, solo, on the stage of the London Palladium…
My God, but it’s a big stage! By the time you’ve walked to the centre spot, you’ve aged six months!

2) Taken tea with Julie Andrews…
And she actually said: “Shall I be mother?”

3) Preached a sermon in the Chapel of Magdalene College, Cambridge…
Unfortunately I shocked the porter because I didn’t have any robes! “You’re a free-church minister then are you, sir?” he asked and when I told him I was a layman, he went very pale and almost fainted away!

5) Dubbed the voice of Christopher Lee as Saruman…
It was ONLY a TEMPORARY soundtrack mocked-up during the making of the extended cut of The Lord of the Rings: The Return of the King, but if Mr Lee had ever found out he would have been seriously NOT amused!

That's five of my not-so-dark secrets revealed and I now tag the following bloggers:

So, what FIVE things about you doesn't anyone know? Tell me if and when you blog details of your secret life and I'll post a link.

Meanwhile, regular readers who have the misfortune (or possibly the good luck) to be 'blogless' are welcome to use my blog as a confessional! 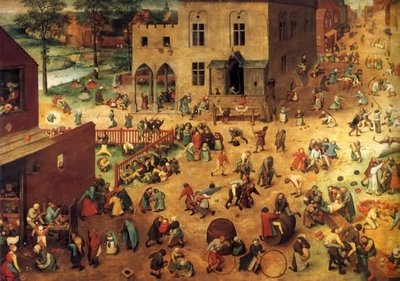 [Image: Children's Games by Pieter Brueghel (including touch-tag)]
Posted by Brian Sibley at 01:00

Perhaps you should publish these revelations about yourself as "Sibley's- Believe It or Not!"

Incidentally, by popping in like this, am I at risk of being tagged?

I want to know why you got held overnight in the bridewell !
Stands to reason that we're all not going to have done anything worth confessing in the same way as you have. I, for one, have had a very dull life !

If you're supposed to tag five bloggers why have you tagged ten?

Must admit I'm struggling to find five bloggers to tag (most bloggers I know got tagged a long time ago and have already been through this).

Hopefully I'll have the thing sorted out by tomorrow.

PETE - You're safe, I've already tagged too many pople (see above)!

IAN - I know! I know! I just felt like breaking the rules and didn't want to offend any of my precious readers! Actually, there's at least three who'll never get round to doing it and I'll happily excuse two more if that ensures I don't get banned from future blogger games... ;-)

Hehehe, consider it done. I thought I’d best get it sorted sharpish, as there’d be no-one left to tag! You got Ian and Sir Good of Dog. Pity the poor souls I’ve now tagged... ;-)

Nice work! I particularly liked seeing your use of Brueghel ... It reminds me of a production of Caryl Churchill's "Top Girls" I was involved with a couple of years ago... Thanks for responding to the tag, and I appreciate the link!

-Brian Sibley (The American One)

Ok I've been tagged and now responded at:
http://davidweeksmagic.blogspot.com/

That is really interesting. Thanks for tagging me. You caught me at a disadvantage, while I was getting over a flu and couldn't think right from all the medicine... but I did my best.

Anne - Thanks for taking part when you were still poorly - and for the insights into YOU! :-)