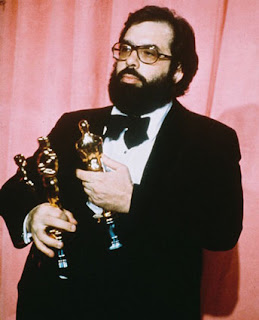 Some 21 years ago, I was standing in line for 'Mr Toad's Wild Ride' in Disneyland, when a man mistakenly thought I was Francis Ford Coppola.

This wasn't quite as absurd as it might sound, because the then new 3-D Michael Jackson movie, Captain EO, was being premiered that day in the park and the film had been directed by FFC.

In response, I tried pointing out that Mr Coppola was unlikely to have to stand in line at Disneyland, but my accoster was unconvinced by that or, indeed, by my British accent. "Oh, well," he said, "if want to be difficult! I was only going to suggest you should give my son, Tommy here, a screen-test because the kid's a born natural, but I'm sorry to have bothered you!"

I politely replied that I was, in fact, a journalist from London reporting on Francis' film rather the man himself - but it was to no avail. "So bloddy grand, these frigging celebrities!" he muttered.

Later in the day, another Godfather fan-boy came up and asked me to pose for a photo and, once again, I explained that I was not who he thought I was!

When, however, a third person rushed up to me as I was heading for the exit turnstiles and thrust a pen and autograph book into my hands, I simply smiled sweetly and signed 'Best wishes, Francis Ford Coppola'!

Of course, as the pages of Private Eye long ago proved, Everybody looks like Somebody and having spotted on various blogs that My Heritage was offering to identify celebrity look-alikes I decided to have a go, confidently expecting them to come up with Mr C.

I tried assorted snaps taken over the last few years showing me with various hairstyles and wearing different glasses (even sans specs) but not so much as a glimpse of Francis...

Oh, well, never mind... At least I have the satisfaction of knowing that I sometimes look like Jack Lemmon or Charlton Heston and - presumably on better days - Vince Vaughan or Jean-Claude Van Damme.

Mind you, any system that thinks I look like Gareth Gates and Bela Bartok (musical though they both are - or were) has got to be, at best, a tad fallible; and whilst the inclusion of Luciano Pavarotti wasn't too much of a surprise, I'm not entirely sure what to make of my supposed likeness to Jesse L Martin, Will Smith and Michael Jordan! 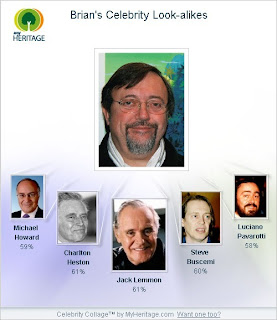 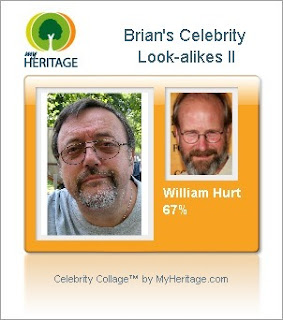 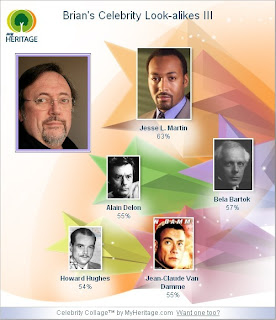 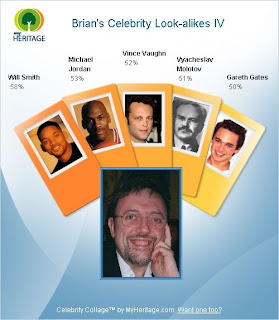 I wonder... Are any of these people ever told that they look like me?!
Posted by Brian Sibley at 12:00

of 'The Unsung Story' I was saying to the women in the shop 'Oh he's not at it again is he.Who is pretending to be today.. ah the famous author Brian Sibley...' I thought then (and continue to think) that as the Famous Author Brian Sibley, you did a pretty fair job. Anyway, when did Francis Ford Coppola ever write a book on Dickens ?

Do you not realise that Francis Ford Coppola is actually Peter Jackson? have you ever seen them together?
Precisely . . .

I'm surprised that first picture didn't give Steven Fry as one of the possibilities.

I was once - just once, mind - told that I looked like Rob Lowe. Didn't mind that at all. (The guide dog sniggered.)

And my Lovely Husband™ has remarked more than a few times that I look like Bono out of U2. I'm not sure if that also applies when I'm actually wearing wraparound sunglasses, without which how could anyone look like him?

Perhaps I can explain my half a post. Because Google doesn't recognise my password,in order to post, I have to type it up, copy it, leave the page to sign up for a new account, return to it, paste it in and then send it. Obvious, I didn't copy the whole lot ! I mention this just in case anyone wonders why my post makes no sense whatsoever.Perhaps no one expects them to by now !

SUZANNE - Have you ever been to Wales? I bet you'd get mistaken for CZ-J there...

DAVID - FFC and PJ : one and the same? Never thought of that! Must have been why I could never get those interviews with PJ - should have asked to meet with FFC instead!

QENNY - Of course! I see it now!! You ARE Rob Lowe! Don't try and deny it! I want an autograph next time I see you at TMC or I'm going to tell THE SUN!!! Oh, yes and I'll give you my Stephen Fry autograph, OK?

Sounds like you and Google have an "issue" (as problems are called nowadays). Maybe you need to consult Google HELP; or you can always do what some of my other commentators do: e-mail me the comment and I'll post it on your behalf...

Comments don't seem to be enabled for today's blog, so I'm going to confue you by leaving my comments on yesterday's blog!

Is the Blair = Thatcher match real, or did you Photoshop this yourself? It's inspired, but too good to be true.

This software obviously needs more work, as it has failed to show the Pope's most obvious lookey-likey: Kenneth Kendall. (And sometimes Ann Widdecombe...)

Totally genuine, Phil... I don't even have Photoshop - let alone have the time to do it!

Ann Widdecombe! I knew I'd seen him somewhere before!!