I'm starting an occasional feature called Wednesday Windows in which I'll be reproducing favourite shots from my Window Gazing blog with a little bit of background about how and why I came to take the photograph.

This picture was taken on the 29 December 2005 on one of the balconies of the Ca'd'Oro Palace on the Grand Canal in Venice.

It was our first visit to Ca'd'Oro which had only recently re-opened after several years of being under restoration.

Photography of the relics and antiquities in the museum is not allowed, but it is permitted outside on the loggias where most people settle for a shot of the gondolas or water-taxis passing to and fro on the Grand Canal below or of the fish market on the opposite embankment.

I, however, was captivated by the reflections created by the glass wall and doors that separated the museum rooms from the balconies - acting as both windows and mirrors - and the accompanying shadows cast by the columns and arches of the loggia itself. 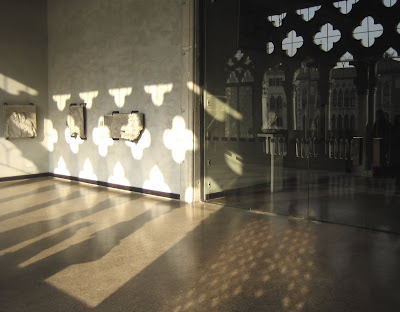 I spent a long time waiting for the loggia to become empty so as to get a 'perfect' mirror image, but to no avail. I gave up and wandered round the rest of the exhibits. Then, just before we left, I went back up to have a final look.

To my surprise, it was now deserted apart from a woman talking to a man wearing a long coat and a fedora. I tried, without success, to get a shot of the pair silhouetted against the late afternoon light and eventually, the women left and the man began making calls on his mobile telephone. I suddenly realised that this figure, alone on the balcony, might offer an interesting image suggesting mystery and melancholy.

At first I tried to get the man, the balcony and the vista of rooftops beyond, but the solitariness of the man's silhouette seemed to lose its impact when set against the backdrop. 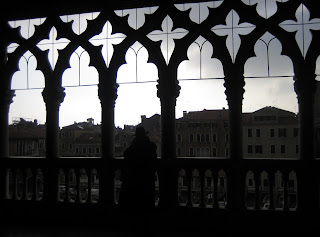 I then moved so as to include a further window and a distant campanile, but the subject of the picture no longer seemed as clear... 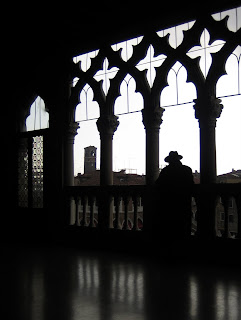 I started rapidly shooting off picture after picture - some vertical, some horizontal - each from slightly different angles and (since the man refused to stand still) I was well aware that in several shots (left) it was going to be all too obvious that he was on a mobile...

To add to my problems I was now shooting into the sun and so had to be careful to position myself so that the sun would be obscured behind one of the columns or the architectual tracery of the loggia arches.

The more clearly I saw in my mind's eye the shot I was looking for, the harder it became to get it!

Soon I was worrying that the man's female companion might return, or that a horde of tourists would suddenly spill out onto the balcony and ruin the composition. There was also an increasing risk that he might turn round and catch me taking photographs of him!

Then, at long last, he finished his call and just stood looking out at the view.

I had the picture I wanted. 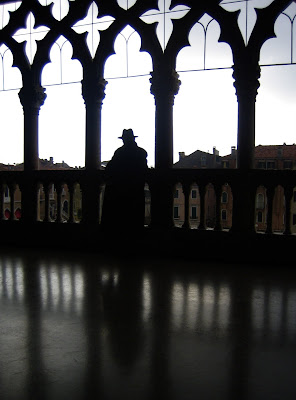 A second later, the door opened, the woman crossed to join the man and they turned and went off together into the museum...

If you have a photo that you'd like to offer for display on Window Gazing, send it as a jpg to mail@briansibley.com.
Posted by Brian Sibley at 12:00

These pictures are wonderful! You're so artistic. :)

Thanks, Anne! It is one of only a handful of my Venice photographs of which I am proud.