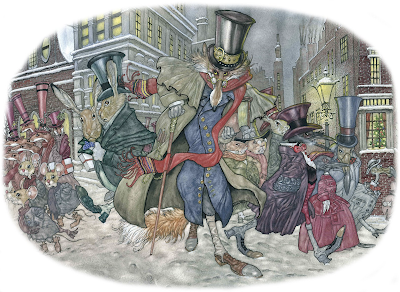 There have been many dozen (doubtless several hundred) illustrated editions of Charles Dickens' A Christmas Carol produced during the 175 years of its celebrated literary life; this Christmas comes a brilliant new interpretation by the remarkable Spanish illustrator, Angel Dominguez.

Dominguez – who is a true 21st century inheritor of the illustrative traditions of past-graphic-masters Arthur Rackham and Edmund Dulac – has already given us fresh and vibrant interpretations of such classics as Alice's Adventures in Wonderland, Through the Looking Glass and What Alice Found There and The Wind in the Willows along with a clutch of original story-and-picture-books.

Now, he turns his brilliantly perceptive pen and brush to Charles Dickens' A Christmas Carol... 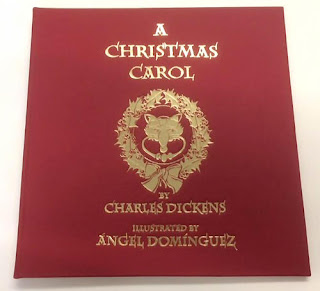 And when I say 'brush', that is, in fact, an appropriate choice of word, since Dominguez has taken the characters in this famous "ghost story of Christmas" and transported them into an animal-realm interpretation of Victorian London, with that mean humbug, Ebenezer Scrooge Esq., cunningly translated into a sly old fox! 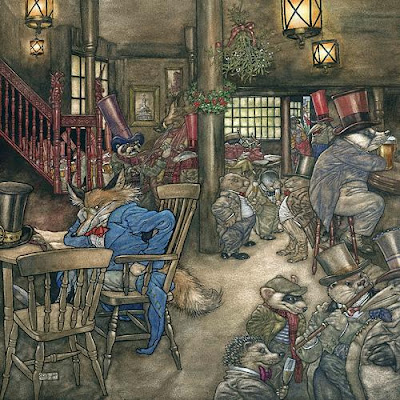 As can be seen in this illustration of Scrooge – prior to his succession of ghostly encounters – scowling over his ledger, while awaiting his "melancholy dinner" in the crowded London tavern, Dominguez stuffs his illustrations with an intensity of detail and evocative atmosphere.

A sharp observer of nature, the characters boldly – and with complete success – combine the animalistic and the anthropomorphic and the result is pure delight! 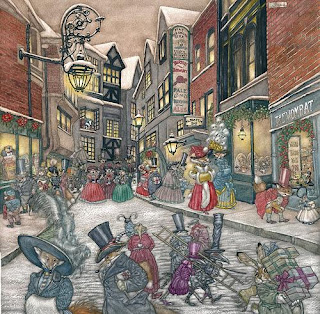 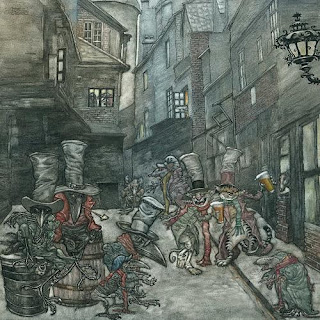 There have been, God love us, more illustrated versions of A Christmas Carol than you've had hot turkey dinners!

For starters, there was the original 1843 illustrator, John Leech, followed by, among many others, the aforementioned Arthur Rackham, Ronald Searle, Quentin Blake, Michael Foreman, Ian Miller, Robert Ingpen and Christian Birmingham. So there's no more a shortage of pictorial interpretations of Mr. Scrooge, Marley's Ghost, Bob Cratchit and Tiny Tim than there is of movie incarnations; but Dominguez's approach is so completely unique (it can be safely avowed that no artist has ever previously depicted the Spirit of Christmas Present as an orangutan!) that the story takes on new flesh –– or, perhaps, I should say, new fur and feathers! 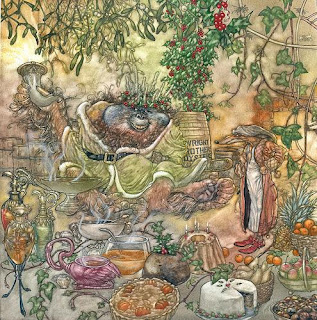 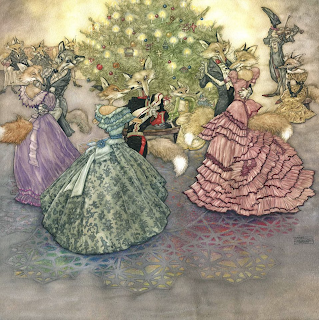 Needless to say, since Scrooge is a fox, the little poor-but-proud Cratchit tribe are  endearingly redrawn as a family of mice, ready to scamper in equality beside the creations of Beatrix Potter. 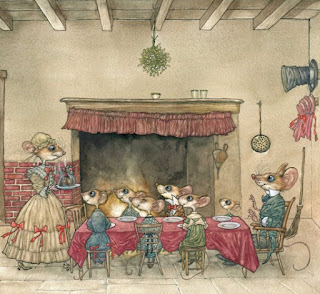 It is a testament to the brilliance of Dickens' genius that his novella took England by storm within the first months of publication and pretty much conquered the entire western world within scarcely more than a decade.

It is also the hallmark of a classic such as this, that the story can carry such myriad impositions and interpretations without losing any of its power or weakening any of its essential truths.

In this new edition, Angel Dominguez gives a original, unexpected, perspective on the tale and, in so doing, has created a timeless classic that remains fully Dickens and yet also made it completely his own. 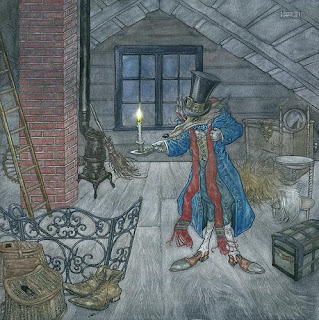