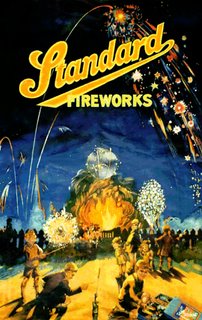 As kids, we'd chant: “Remember, remember the Fifth of November: gunpowder, treason and plot,” and collect "A penny for the guy" - which, in truth, meant a penny (or maybe something more) with which to buy FIREWORKS!!

I love fireworks. Always have. Always will.

I remember a particular 5th November when I was, maybe, four years old and, due to a bad asthma attack, was not allowed to go out into the garden in case I inhaled the bonfire-smoky, cordite-laden air.

So I had to stay indoors and stood, nose to kitchen window-pane, listening for every whiz, pop and bang, and watching wide-eyed as dazzling blazes of light sprang up into the night sky above roof-top and chimney-pot and then fell as shimmering cascades of stars…

There was real romance about fireworks… The garishly coloured posters of the various manufacturers - Astra, Pains, Brock, Wessex and Standard whose TV sing-song jingle I can still recall word for word, note for note: “Please to remember the Fifth of November; Light up the sky with Standard Fireworks!”

Then there were those brightly printed boxes, their contents wrapped in tissue paper - green, pink, blue and purple - and with names that conjured such wondrous imaginings, promised such magical enchantments… 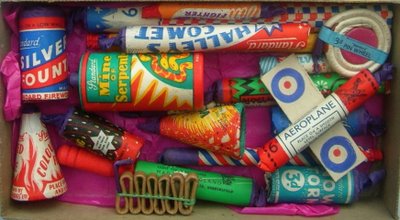 There were the classics, of course, the Catherine Wheel (named after the fate of that most unfortunate saint), the Jack-in-the-Box and the Roman Candle but the real delights were those that remained a tantalising mystery until the moment when one "lit the blue touch paper and retired"… 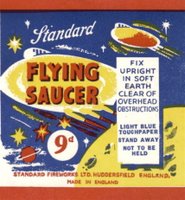 Many of these names were inspired by flight and even aerial warfare: ‘Helicopter’, ‘Aeroplane’, ‘Spitfire’ and ‘Air Bomb’; and, from the 1950s onwards, ‘Skyrocket’, ‘Flying Saucer’, ‘Star Ship’ and ‘Retro Jet’.

Storms were often present in the firework box - among them Snowstorms, Sandstorms and Tropical Storms - together with such other meteorological fantasies as the ‘Polar Whirlwind’.

Precious metals and gemstones were liberally scattered through any decent selection: ‘Silver Rain’ and ‘Golden Splendour’, ‘Diamond Cascade’ and ‘Emerald Casket’, although it was comparatively rare to find a much-to-be-desired ‘Koh-i-noor’…

There were fireworks with horticultural associations: ‘Chrysanthemum Fountain’, ‘Marigold Spray’ and ‘Shamrock Shooter’; and the animal kingdom was also represented with Flamingos and Fireflies, Screech Owls, Vampire Bats, Hornets’ Nests, Humming Spiders, Butterfly Twinklers and what would probably be Indiana Jones least-favourite firework - the ‘Mine of Serpents’! 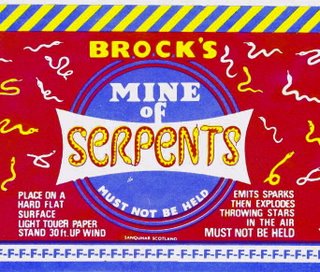 The world’s natural wonders provided suitable monikers for such items as the ‘Coloured Niagara’, the ‘Everest Cone’ and assorted volcanoes including ‘Mount Vesuvius’, ‘Mount Etna’ and ‘Stromboli’.

But by far the most enthralling names sprang out of the worlds of fantasy and fable: ‘Harlequin’, ‘Jack Frost’ and ‘Banshee’; ‘Fairy Fountain’, ‘Elfin Spurs’, ‘Goblin Forge Fire’, ‘Dragon’s Tooth’, ‘Crackling Cauldron’ and ‘Hydra-Headed Comet’. There was even a biblical reference casually thrown in (although, of course, one should never throw fireworks themselves!) in the form of a Moses-style ‘Burning Bush’.

Fireworks are now no longer a fabulous treat to be savoured on just one night of the year, but whilst they are now heard exploding pretty much any old time, those of us who grew up in the years of post-war austerity will always associate them with this day, November 5th, and will have fond memories of praying that it wouldn’t rain and, (if it didn’t) of standing in the cold, twirling sparklers, jumping at three-penny bangers, waiting to see exactly what a ‘Whirligig’ would look like when it started to whirl and “Ooh-ing” and “Ah-ing” as Golden Zodiacs erupted and Amber Electrolytes, Hot Rods, Radium Dazzlers and Blazing Wigwams revealed their various bedazzlements.

But how we would have loved one of those really exotic fireworks which were only ever seen on the manufacturer’s posters, but were never stocked by our local toyshop or newsagent - fireworks such as ‘Devil Amongst the Tailors’ described as “juggling balls of fire followed by an explosion of wriggling serpents”!

Who wouldn’t want to light the touch paper of one of those? 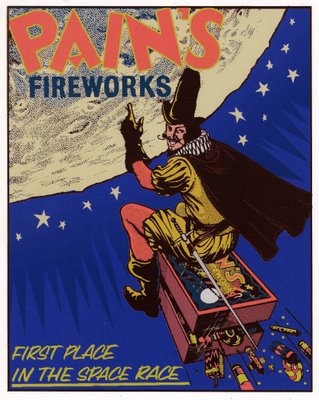 [Images from the highly-nostalgic Firework Museum.]
Posted by Brian Sibley at 00:00

Fantastic ! Twas only yesterday I was reminiscing about the elements of danger we incroporated so comfortably into our November 5th ritual and there you go, picturing them ! The magnificent aeroplane thingy with wings just shot off any which way. There was no telling whether you'd get hit or not - the 'Helicopter' did the same thing. When lit, it whirled round in a circle and then launched itself at the nearest group of people. The coiled device shown is actually a 'Jumping Jack' which shot off down the garden, Tigger style, with the sole purpose of finding the first person with an available hood.Whatever happened to bangers - the 'Little Demon' had an evil reputation and was likely to go off in the hand of the person who was throwing it at you. The 'Olympic Torch' was actually SUPPOSED to be held - hardly fitting in today with our firework code. When I was younger, I jealously hoarded all the shells of those burnt-out fireworks in the best condition I could....Sadly my more practical older-self stuck them on Ebay a few years back where they made a staggering £300 ! To think today the fire station just puts up a SCREEN displaying IMAGES of a bonfire.Remember the Twilight Zone episode where the workers spend leisure time in virtual experience headsets. We're getting there.... Good job us oldies are still pleased to remember, remember....

Lovely! But still nothing can ever match Gandalf's dragon!

For anyone NOT familiar with J R R Tolkien's description of Gandalf's fireworks, they are lovingly catalogued in the first chapter of 'The Fellowship of the Ring':

"There were rockets like a flight of scintillating birds singing with sweet voices. There were green trees with trunks of dark smoke: their leaves opened like a whole spring unfolding in a moment, and their shining branches dropped glowing flowers down upon the astonished members, disappearing with a sweet scent just before they touched their upturned faces. There were fountains of butterflies that flew glittering into the trees; there were pillars of coloured fires that rose and turned into eagles, or sailing ships, or a phalanx of flying swans; there was a red thunderstorm and a shower of yellow rain; there was a forest of silver spears that sprang suddenly into the air with a yell like an embattled army, and came down again into the Water with a hiss like a hundred hot snakes.

"And there was also one last surprise... A great smoke went up. It shaped itself like a mountain seen in the distance, and began to glow at the summit. It spouted green and scarlet flames. Out flew a red-golden dragon - not life-size, but terribly life-like: fire came from his jaws, his eyes glared down; there was a roar, and he whizzed three times over the heads of the crowd. They all ducked and many fell flat on their faces. The dragon passed like an express train, turned a somersault, and burst over Bywater with a deafening explosion."

How right you are, Mr Scrooge! Everything is different!

Why, I dare say 'Blue Peter' didn't even bother to do a bonfire-night special with snack ideas such as rice crispies in melted chocolate (you will need a grown up to help with this) and useful instructions about making sure that the family pet was kept dry in an old biscuit tin --- or was that the fireworks?

Interestingly, the dangerous element of fireworks still exists in most other European countries and, a few years back, we attended a festival in Braga (Portugal) where enormous Catherine wheels were fixed on wobbly poles in the middle of the street and flew off in all directions, while people let off huge rockets - more like mortars - from their hands that made those fireworks we were allowed to hold (in a GLOVED hand if I remember rightly) look pretty feeble. And in several Mediterranean countries, including Greece, they throw REAL DYNAMITE --- and people get maimed and killed...

On a happier note, your comment reminded me that I always used to scour the garden on November 6th for spent rockets ... I wish now I'd saved them for e-bay!! ;-)

One of the great descriptions of a firework night came about on an interview you did with Ray Bradbury (1988) where he describes his relatives coming round for the 4th July celebrations, each bringing a few dollars worth to add to 'lighting up the whole sky'.Perhaps the most evocative moment though, was when he mentioned that moment when the last one is fired off and you know that, that is it, forever - forever being the following year. Do kids still get that excited ?

Thanks for reminding me of that conversation...

Where would I be without you, Mr Scrooge?

In the unlikely event of it's being necessary, you'd better write my biography -- or at least my obituary!

Hello! I found a old box of fireworks inimy Dads shop, it's very cool!
And complete.I'm trying to figure out what year they are from ,and how much I could possibly sell it for.
Maybe if you geta chance you can help me out?
Thank You, Pamela

Thanks for this. I live in Australia now, but suddenly remembered. Light up the sky with Standard fireworks. It was great to be able to Google it and get to your article. How different everything is now.