Thomas Carlyle once wrote: "Nature alone is antique and the oldest art a mushroom," and when we were in that Cambridgeshire farm-shop the other week (where we met the ostrich) I decided - the way one does - to take a photograph of some mushrooms... 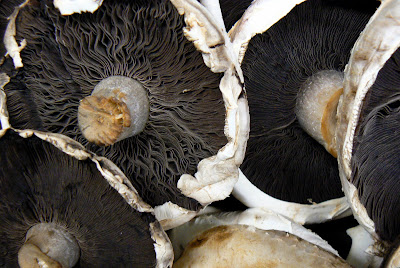 Click on image to enlarge
To be honest, I've always felt a bit ambiguous about mushrooms: their shape and form intrigue me and I love their texture and their Victorian photograph-tones of black-and-whiteness...

But, with the exception of the porcini mushroom, I've never been hysterically keen on them as a culinary offering and the greyness of your average mushroom soup - coupled with its dull, pungent, earthy smell - has always struck me as being just too reminiscent of mouldering graveyards and decaying compost.

Interestingly, I now discover, I am not alone - as the following extracts show...

I confess, that nothing frightens me more than the appearance of mushrooms on the table, especially in a small provincial town.

Strange that mankind should ever have used the mushroom. All the various species of this substance are of a leathery consistence, and contain but little nutriment. The condiments or seasonings which are added are what are chiefly prized. Without these, we should almost as soon eat sawdust as mushrooms.

Not being ambitious of martyrdom, even in the cause of gastronomical enterprise, especially if the instrument is to be a contemptible, rank-smelling fungus, I never eat or cook mushrooms.

- Marion Harland, Common Sense in the Household: A Manual of
Practical Housewifery (1873)

Whatever dressing one gives to mushrooms, to whatever sauces our Apiciuses put them, they are not really good but to be sent back to the dungheap where they are born. 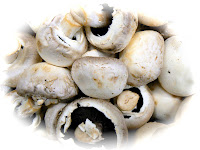 Have you sampled the fantastic Field Mushrooms to be found in Nottinghamshire?

What about that other fungal growth ~ the White Truffle of Alba?

Maybe it's just as well you didn't come to Tolkien 2005 then, Brian. They served us Hobbits mushrooms at EVERY breakfast and supper for 4 days!

Phooey - Mushrooms are among the yummiest of all things.

Hooray - David stands up for the humble mushroom AND finds something good coming out of Notts !

Who'd have bloody thought it?! I'm writing a blog read by a load of mushroom-lovers!

You've all read too much Tolkien, that's your trouble!! ;-)

Wash the mushrooms in a bowl of water, cut it and put it in a frying pan with olive oil (not butter!!) and garlic (as much as you like), fryt it, slowly and put red wine (or white if you prefer) and keep cooking until the mushrooms are tender (dark colour). It`s a wonderful garnish for meat, roast or dish.

Please, don`t tell anyone but part of my ordinary job is cook and make photos of the receipes I cook..... (after years of University!!!)....

Well here's one mushroom hater! I have just never been able to get over the look of them. However, I do love the smell of the things when cooking and I like mushroom soup provided there are no pieces in it resembling mushrooms!

Ah well - you've obviously never had my field mushrooms stuffed with pate, doused with brandy with a melted crispy cheese topping have you ???

Er, thanks EUDORA and SUE... Evidently there are several readers here whose mouths will already be watering! ;-)

(And, Sue, I would say that maybe I'll try just a little one next time we're on Kalymnos --- but do they ever HAVE field mushrooms on Kalymnos?

ANDY - We mushroomphobes will just have to stick together!!

I blow hot and cold about them. They do them very well indeed on Tenerife - tiny little button mushroom in a sizzling, shallow bowl of boiling oil and garlic. Very nice!

My Lovely Husband™ can make the Sunday breakfast mushrooms lovely, and I don't know how.

That said, if you whizz some up in a blender with a bit of milk, and then use it in a roux (sp?) sauce, that can be quite lovely.

So many comments (and kitchen wrinkles)! Obviously someone should start a mushroom blog - and with some degree of urgency!!

Or perhaps you must create another label: gastronomy...

Where I used to live in Tasmania, large field mushrooms grew all over my lawn.
I would pick them in the mornings and make pasta.