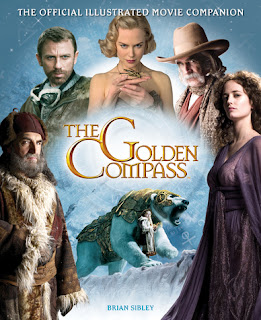 As you may have noticed from the side bar (right), I've a couple of new books out, one of which is The Golden Compass: The Official Illustrated Movie Companion, which should absolutely not be confused with earlier titles such as The Lord of the Rings: The Official Movie Guide...

Essentially, however, this is another of those 'book-of-the-film-of-the-book' books; but it's been rather nicely got-up and, at £14.99 (or, probably, cheaper!), it will make a fairly spiffing present for someone-or-other's Christmas stocking!

Just in case you have been vacationing on Mars, I should explain that The Golden Compass is the upcoming fantasy film blockbuster (from New line Cinema who brought you... er... yes... that's right, The Lord of the Rings) and stars Nicole Kidman, Daniel Craig, Eva Green, Tom Courtney, Jim Carter and talented newcomer, Dakota Blue Richards.

The film, is based on Northern Lights (or as it is known in the USA, The Golden Compass), the first volume of the award-winning, best-selling trilogy, His Dark Materials by Philip Pullman.

Even if you're not just back from Mars, you might just have missed the trailer, take a look at it here.

What...? Ah, yes, that was the voice of Gandalf speaking for Iorek Byrnison the armoured bear (a late substitute brought in from the Gray Havens to replace Nonso Anozie) and, yes, again, that really was Saruman in one shot, playing, I'm told, Lord Boreal - although this came as a bit of a surprise to the author of The Golden Compass: The Official Illustrated Movie Companion, since whilst Lord B is a character in Pullman's book, he wasn't in any version of the shooting script that I ever read...

Anyway, as readers of Philip Pullman's trilogy will already know all of the characters in the story are accompanied by a daemon: an outward manifestation of their 'soul' in animal-form. And as part of the fun-and-games on the official website, you can answer a questionnaire in order to identify your personal daemon.

I had a go and and I'd like to introduce (below) to Aleone, the daemon that has been chosen for me...

However, before it takes on its final manifestation, you can assist in shape-shifting it into a possibly more appropriate form by joining in the process.

Thanks for your help - I await the outcome with interest and will report back in due course...

Hold on... Jack Shepherd's Master of Jordan College calls it an "alethiometer" in this trailer, rather than "golden compass"... Then again, this is an earlier trailer (No, Mr Gandalf voicing Iorek)... Oh, my fragile little mind...

All that aside, it looks darn tootin' good!

I believe that Neil Ross of limbolog.blogspot.com is responsible for the design of the polar bear...

As a long-time resident of the Red Planet, I've never heard of 'The Golden Compass'. I await the film with interest even if it does look like someone has just watched LWW adverts and copied them exactly with the same score. As the two most distinctive fantasy series have just been/are being made, its going to be hard watching more of the same in their shadow.

Very funny this game... but I am not agree with the translatíon of the word daemon in spanish (on the web) daemon is daemon (greek word) not daemonion..

And I confirm the daemon of Brian.

And I think that the compass is beautiful, a good idea too for a xmas present....

How extremely frustrating! I heard everything, but no pictures? What's happening? Have you got some sort of weird programme?

GOOD DOG - Yup! The trailer encrypted for fans to embed on their webs and blogs is an earlier version and NOT the one actually showing on the official website...

SO, I've taken out the embedded trailer and put in a link to the site - which should solve SUZANNE's problem, too!

I really HOPE that the use of the words 'golden compass' to describe the 'alethiometer' were simply just dubbed for the trailer rather than for the film itself.

I also notice, by the way, that Sir Derek Jacobi no longer appears in the trailer - and indeed, is no longer listed as a member of the cast on IMBD --- I think we can safely assume that there have been rather a lot of re-shoots going on that the hapless author of TGC:TOIMC was not Officially (or Unofficially) informed about!!

BOLL WEAVIL - Over here the book is titled 'Northern Lights' and, together with 'The Subtle Knife' and 'The Amber Spyglass' make up a trilogy known as 'His Dark Materials'. The series has a huge following in the UK and USA and the third volume was the first children's book to ever win the Whitbread Prize for literature.

ELLIOT - Thanks for the link to Neil's blog.

EUDORA - There's nothing wrong with being an eagle! I'm sure you look amazing when you're in flight!! Still 'Eamon the Daemon' is funny!!

Thanks Brian! That was much better! Looking forward to the film as I've read the trilogy, thanks to my teenage daughter...
And I hope they keep the word Alethiometer - so much more poetical I think.
By the way, my daemon is a whippet! I don't particularly like that breed, but I'm quite glad my daemon is a dog!

I'm not sure what to do with your daemon to assist it to it's final shape, but I loved the trailer, and created a daemon for myself. It's a snow leopard, and it's called Vyena. I'm quite pleased - Lord Asriel has one of those, too, doesn't he?

I reloaded the page, and got it working.

Monkey business for sure - My daemon is a chimp!
Enough to drive you bananas......Looking forward to the movie though, the books are a delight & thought
provoking.

JEN - A chimp? Oh dear, I think I ought to count my blessings!

Ahhhhh, you have no idea how much stress that has caused us at Sega, who are doing the video-game-of-the-film-of-the-book *breathes*.

Still, it it pays the rent it's all good, right? Congrats.

Hi, Gabriel! How did you stumble onto my blog? Just checked out your site and your album... Recorded, I assume, between sessions of daemon-wrangling??