Following on from the misadventure of the keys and the bananas which I reported the other day, I can now tell you that the--- 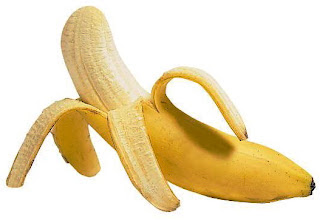 MOST POPULAR FRUIT
It is also, of course, unquestionably the rudest (wasn't it Mrs Beeton who described it as "a vulgar fruit"?) and, probably, the silliest which it is why it is the butt - if a banana can be a butt (no, please don't let's go there!) - of so many jokes...

Q: Why don't bananas snore?
A: Because they don't want to wake up the rest of the bunch.

Q: What do you do if you see a blue banana?
A: Try and cheer it up.

Q: Why did the banana go out with the prune?
A: Because it couldn't find a date.

Q: If a crocodile makes shoes, what does a banana make?
A: Slippers.

Q: What is yellow on the inside and green on the outside?
A: A banana dressed up as a cucumber!
But what about this one...

Q: What's the best way to make a banana disappear?

Did you get all those banana jokes from Yellow.com?
I'm pretty sure that's clear glass rather than a mirror and so we are seeing his two hands. But it still doesn't explain how he makes the banana disappear.

Ooohh, good... but I'd notice the little, very little, difference of tempo in the left hand....

You don't need any fancy mirrors round here Mr B. I'd just scoff the banana !

I think BOLL was hiding somewhere (maybe behind the book) and simply gobbled it up!