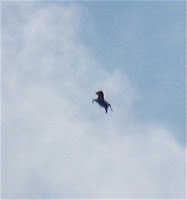 Only five of our regular bloggers took a stab at explaining this photo of a flying horse - although 'stab', as you'll see, is probably not the best turn of phrase.

Magician QENNY approached the problem with an illusionist's eye...

Would it be considered trick photography if this were based on something like the Peppers Ghost illusion?

And can we assume that the horse-like thing is much closer than the clouds it seems to be flying into? I am intrigued!

SUZANNE came up with a novel interpretation:

It's International Toy Horse throwing day... Anyone can tell you that! Well, why not?

You get cheese rolling, hamburger eating, hammer throwing... Why not toy horse throwing?

Yep, and it might even become a recognised Olympic sport by 2012...

DRAGONLADYCH chose a whimsy way of answering the puzzle:

Easy. It's a black hole created by Aliens because they were disappointed that the CERN did succeed in making one.

It's only disguised as a horse so we would mistake it for a hot air balloon and keep us from panicking. How thoughtful of them!

The other two nailed it directly - but with alternatives: GILL speculating on a theory similar to SUZANNE's:

It is either a toy horse hurled into the air, or it might just be a balloon!

And, last but not least, ANDREW GLAZEBROOK, because his response was the FIRST to be received - only minutes after the post was on the site:

Is it a balloon? Or maybe falling from a great height!?

I take as a great compliment GILL and ANDREW's assumption that I would be capable of photographing a toy horse lobbed into the air or a (real?) horse falling (why, Andrew, why?!) from a great height... But, yes! It was a helium filled balloon: that escaped from the grip of a toddler at the end of a visit to the fairground and galloped off into the blue.

Now, I'm going to confess: it was actually a balloon ZEBRA, but I knew that if I told you that (especially since the stripes weren't visible any longer) it would be a dead give away!
Posted by Brian Sibley at 00:01

Whimsy, yup that would be me :P
If only I DIDN'T always make the same typos! ^^