While on Kalymnos, we saw an old, tired donkey, tethered in a field beneath a fig tree.

By and large, donkeys have had a bad press: they are stubborn, intransigent creatures who have to be harried, prodded and beaten into doing tasks that the far more noble horse will willingly undertake; they are what idle, disobedient boys turn into in Pinocchio; they are gloomy, melancholy pessimists like Winnie-the-Pooh's friend, Eeyore; or, at best, they are hee-hawing clowns like Shrek's garrulous companion.

George Herbert said: “If a donkey bray at you, don't bray at him,” and the Talmud advises: "If one man says to thee, 'Thou art a donkey', pay no heed. If two speak thus, purchase a saddle!” And, indeed, I have, myself, told a rather unattractive tale of a donkey.

But, as I looked into the large, liquid eyes of this sad, weary creature, my mind flew back to childhood and my first reading of that simple, yet affecting, poem by G K Chesterton... 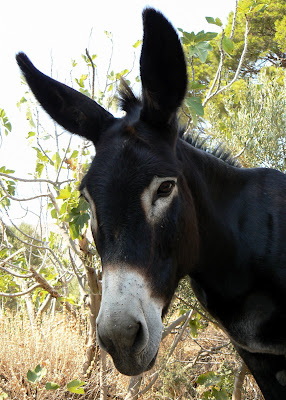 When forests walked and fishes flew
And figs grew upon thorn,
Some moment when the moon was blood,
Then, surely, I was born.

With monstrous head and sickening bray
And ears like errant wings—
The devil's walking parody
Of all four-footed things:

The battered outlaw of the earth
Of ancient crooked will;
Scourge, beat, deride me—I am dumb—
I keep my secret still.

Fools! For I also had my hour—
One far fierce hour and sweet:
There was a shout around my head
And palms about my feet. 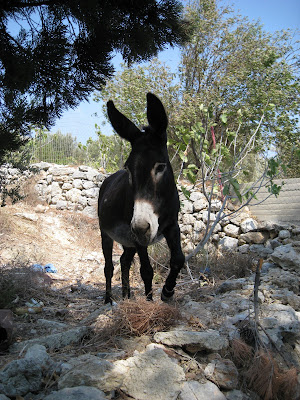 I remember when I was up in the beautiful village of Mijas in southern Spain a couple of years ago, there were about six donkeys taking a break from pulling tourist traps. Whenever one donkey started to bray they all joined in and the noise was both comical and deafening.
Nice to see a Talmudic reference - is that in honour of the Jewish New Year (Rosh Hashanah) this evening?

Those are great photos, Brian and it's always been a favourite poem of mine. You may not have noticed that the children's newspaper First News has moved this week from 'Goats in Gaol' to a 'Jailed Donkey'. (I stress that I'm not a reader of First News, but it is always displayed with the newspapers in our local Sainsbury's!)

LISA - Is it really Rosh Hashannah this evening? Where has that year gone? I'm afraid I'd forgotten, so the Talmudic reference was pure serendipity; nevertheless, I certainly do wish you and all my Jewish readers, a very happy, healthy and prosperous new year.

SHEILA - Thanks for the compliment on the photos, 50% of which goes to Mr W!

And thanks for that story from First News which, for the benefit of those who can't be asked to surf the internet in search of another slow news-day story (however wonderfully bizarre), goes like this:

A DONKEY has been jailed in Egypt.

This news follows our front page story last week about 12 goats being put in prison in another African country.

The donkey got itself in trouble for stealing corn on the cob from a field. Police laid a trap after the field’s owner complained that someone was stealing his crops.

Police caught the donkey red-handed when they found him in possession of the corn and he was taken to court.

A judge sentenced the donkey to 24 hours in jail while his owner got off with a fine of 50 Egyptian pounds – about £5.

If the donkey could talk he would have said: "Eeyore ways gets me in trouble."

Now, Sheila says she just happens to spot the children's newspaper, First News, while shopping in Sainsbury's and I'm sure that's true, your honour... But, for those of you too busy loading up your trolleys with baked beans and loo-rolls, you can check out the goat story in my blog posting, 'In A Stew', on Sunday 21 September...

Many thanks for your good wishes Brian. Today I'm having to try and juggle between getting a lot of copy and photos sent for the paper I freelance for and prepare a Rosh Hashanah dinner for tonight - could do with some help to take care of the 'donkey work' - or perhaps some assistance from a magician - you don't happen to know any?

Do I know any what, LISAH?

Magicians? Donkeys? Or both?

ROGER e-mails, on the subject of goats:

In The Observer this Sunday there was a story that George Clooney had bought the film rights to Jon Ronson's book on the CIA's weird psychops experiments called The Men who Stared at Goats. Just thought you'd like to know (they might need a tie-in...)!

Thanks, Roger, glad you're looking out for my interests. Would you like to be my agent...?

I like donkeys ! I saw the ones in Mijas earlier on in the year and they were certainly more interested in posing for pictures than the various, uglier humans I saw !

I agree with Boll - I too love donkeys. Such beautiful, melancholy, humble creatures!