I seem to be getting a reputation for being something of a goat-fancier...

A herd of goats found locked up in jail
The animals were spotted in a police cell in Africa when a politician was having a look round.

The politician, Claude Nyamugabo, was on a routine visit to see prisoners in the Democratic Republic of Congo. But he was astonished to find one of the cells packed out with 12 goats. The animals were due to appear in court charged with being sold, against the law, by the side of the road.

Mr Nyamugabo immediately ordered that the goats should be released from prison. He went on to say that the police had “serious gaps” in their knowledge. He ordered them to go for more training.

First News, by the way, is (and I quote) "the award-winning newspaper for KIDS"! Natch!

Still on the subject of goats: while on Kalymnos, I was reminded, yet again, how differently the Greek islanders view animals (which are raised to be killed and eaten) from those of us who live in societies where meat is disguised as pre-packed, shrink-wrapped, pinky stuff that comes from the supermarket.

Consider this little fellow who escaped from the nearby field and who is obviously trying not to read what is on the menu board outside Artistico taverna... 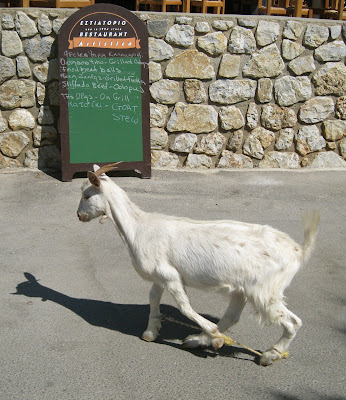 Click to enlarge
As it happens, that particular goat lived to see another day.

This one, however, got itself into a bit of stew... 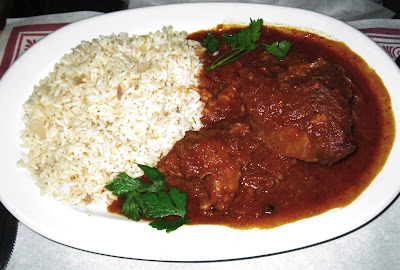 Thanks to David for taking the pictures, Sheila (again) for help in writing the Greek for 'goat stew' and to Roger (also again) for allowing us to photograph his dinner!

A friend of mine showed me her photos of her desert trekking in Mauritania. One of the photos showed the loaded camels: perched right on top of all the luggage was a goat! The next day the goat was supper! Yum yum!

Yeah, but I can't really see a goat carrying everything a camel can, can you?

You're right... That probably would be the camel that broke the goat's back.

I can't remember if I mentioned before, but we used to have British Alpines on the first farm.

Excellent animals with great character. They used to mix in with the cattle and have a whale of a time.

Of course one time they got loose, ran about all over the croquet lawn and then stripped the plants in the front garden clean.

Yes, well they will eat anything/everything and have zero knowledge of the rules of croquet...